How do these terrain mountains/ledges affect gameplay?

In brood war, the regular campaign editor is very limited in what it can do. Modern map editors have allowed map makers to create these sophisticated mountains and cliffs that are stacked on top of each other. Aesthetically, it looks cool, but what I'm interested in is how it affects gameplay. I know that in general, units on the high ground have an advantage due to fog of war and because of percent chance hit/miss. Here are two examples of the cliffs I'm talking about:

One that seems to be "inverted". The ramp itself looks like it's going down, but the sides make it look like gameplay-wise it's going up. 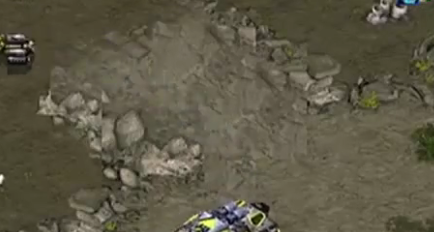 And a regular ramp that's part of a mountain. 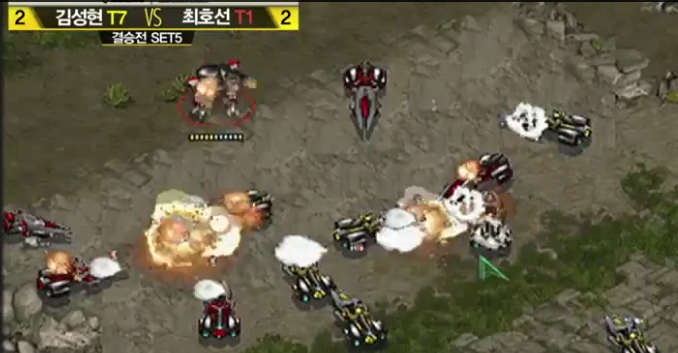 However, I find it difficult to tell which direction the ramps are actually going and on which side of the ramps the player has an advantage. Can someone explain it to me?

Strictly judging by the outlined part, the higher grounds have to be on left side, because if it wasn't, you wouldn't be able to see those rocks. 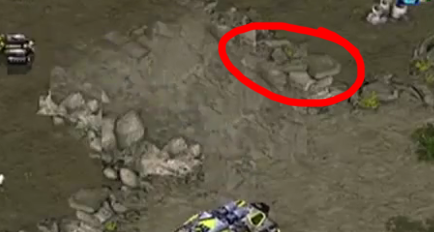 The wide ramps do look a bit unusual at first glance, but you'll grasp the orientation as you play/watch more games.

Those ledges indicate a higher elevation that is non-accessible from ground troops except for the ramp. This is somewhat a good strategy for parking Siege Tanks with the Siege ability upgraded from the Factory Add-on. It also effects the distance used in calculating when any ground unit can stop and fire at the enemy above.

The gameplay is not affected when air units are considered, both because they fly and range on attack is measured differently than when ground units attack.

As for telling what is where, the ledges define the no ground access. Game-wise, there is no affected anything past the width of the ramp. The wider the ramp the more issues you'll have stopping ground units from coming in. The thinner ramps bottleneck units and make siege tanks and other options (e.g. bunkers) a lot better in defending camps and HQ bases.

19
How is 300 actions a minute possible?
5
How can I put Brood War into a window?
0
How to change hotkeys
2
How does the Armour of a unit effect the Damage done to it? (Starcraft 1)
5
How can I avoid drop hacks and crash hacks on Battle.net?
8
How can I change the screen resolution?
3
How do I open Starcraft using custom .mpq files, in windowed mode?
0
How to unlock BroodWar units in original StarCraft campaign?
1
How to retreive texts and sounds of the briefings in Starcraft 1 and Starcraft BroodWar?
1
Starcraft Brood War: How to remove limit of units?