Why is trade blocked between Gulf of Aden and Alexandria?

I'm playing as Ottomans, and expanded all over the place, giving me pretty nice and long trade routes (which I think is a good thing).

Of course I'm trying to steer as much trade as possible towards Constantinople. I'm pretty dominant in Constantinople, Aleppo, Alexandria, Basra, Persia, Hormuz, and the Gulf of Aden. In all of those I have at least 50% of trade power. (I'm smaller in Ragusa, Tunis and Sevilla). I´ve got merchants collecting in Ragusa and Sevilla (because a lot of trade value passes through there and I can´t steer it towards Constantinople). I´ve got merchants steering trade in Crimea (because otherwise it´ll go to Kiev), and Alexandria (because there´s also outgoing routes to Genoa and Venice). I´ve got a fifth merchant that still needs a job, but I´m not sure which. Trade from Aleppo can only go to Constantinople and Alexandria, from Basra only to Aleppo and Persia, from Persia only to Allepo (man, Aleppo is nice), from Hormuz can only go to Basra, and from Gulf of Aden trade can go either to Hormuz (and then Basra, Persia and Aleppo), to Alexandria (which I want), or to Zanzibar (which I don't want). (Edit: now that I think of it, I wonder if I should send it to Hormuz, so it'll collect more bonuses along the way. I'm not sure how that works.) 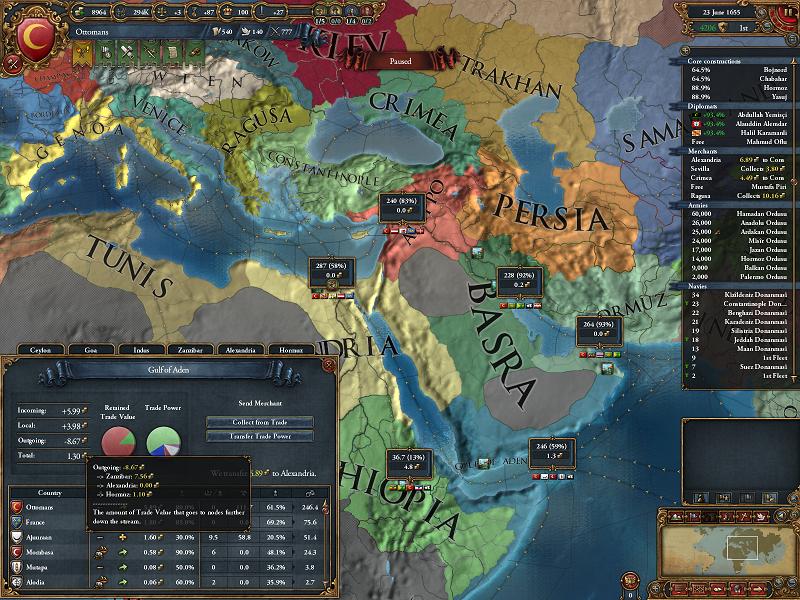 How is this possible? How can my 5.89 turn to 0? Is some unspecified effect causing this? Is it a bug? Do I completely misunderstand how this is supposed to work?

I have encountered the same problem as you playing with Ottomans and a very similar one with Russia concerning White sea.

There's a relation between the proportion of steering power in a trade node you have and the way the trade actually flows. This means that sometimes despite the fact that you control a healthy portion of the trading power in a CoT you will still see the trade flow in a direction you don't want.

The only solution I have found for this is to redeploy your merchants.

Looking at your current setup I would remove the merchants from Ragusa and Sevilla, simply because the efficiency of collecting away from your home trade node is so horrible. I would instead go for the trade routes with India. They have very attractive volume and Indus, Ceylon and Goa all have direct trade routes into the Gulf of Aden. Use some light ships to boost your trading power and a merchant in Aden and two of the Indian CoTs and your benefits will be much greater than what you now collect.

I have not played for a while and may misremember.

According to your screenshot, you haven no merchant present there. This means your trade power is completely irrelevant, because you are not using it. Instead, the trade value is going in whichever direction the other players, who do have a merchant present, chose.

Put a merchant there for steering and you should see the directed trade go up. The more power you heave, the more steering will occur then.

5
I have the Pope and the Curia in my pocket, but they wouldn't excommunicate anybody! Why?
5
How does protecting trade work in Conquest of Paradise?
9
How to expand to the far east?
5
How do I explore unknown land (terra incognita)?
2
Why is France hindering me from retaking Wallis and Vaud?
4
What is the correlation between developed provinces and institutions?