How do I make sure radially-mounted stages don't collide with the craft when they're decoupled?

Many interplanetary launch platforms tend to require radially-mounted stages, especially for the atmospheric portion of their flight. However, I've found that a lot of these configurations have a tendency to result in spent stages colliding with the craft upon decoupling. Sometimes, the damage is isolated to the spent stage itself and I can just consider myself lucky and move on. Often times though, the collision results in Rapid Unplanned Disassembly™ of the craft.

These collisions typically result from one of two behaviors:

Realizing this, I've tried a few things to reduce the likelihood of such issues causing an actual collision:

However, the problem still persists and tends to be generally difficult to manage when I encounter it. Is there a better/smarter way to do this?

I suppose there's really no way to completely eliminate problem 1 as long as you're affected by gravity. You just need to be careful in your craft configuration and flight maneuvers. Make sure that ejecting stages are not directly above other craft components, and that the craft can move away faster than the stage will fall towards it.

Problem 2 seems like it should be pretty simple to fix. Simply make sure there's no torque applied to the stage when it ejects. This means making the stage aerodynamically symmetrical and placing the ejection force inline with the stage's center of mass. That last part is what I can't seem to always do in KSP - especially with stages built from multiple fuel tank components. First, there doesn't seem to be a way to see each stage's center of mass. Second, the stage will always connect inline with the center of its "root" part regardless of how I actually want it connected.

There's got to be an "easy way" to do this. It's Only Rocket Science!™

I've had good results with putting upside-down Sepratrons on the nose cones of my boosters: 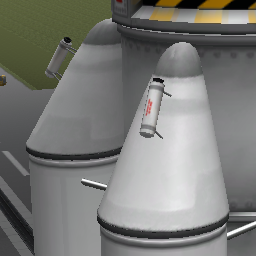 The angle of the nose cone makes them push both down and away, which gets the upper part away from the rocket horizontally while the bottom part falls behind vertically. When they fire, the boosters appear to fall outward in all directions — it actually looks sort of like a blossoming flower.

The problem generally stems from the fact that radially attached stages tend to pitch inward when they're detached. You can take advantage of this by putting a Seperatron near the base of the external stage, pointed backwards, and set to activate when you detach the stage. It will pull the stage back and away from the rocket.

Another option is to give the rocket a spin before jettisoning the radial stages. This will make it so the stages have a force "throwing" them away from the main body.

Put a pair of sepratrons at the top of the radial-mounted booster stack, and another one at the bottom - I also like to have them angled slightly down as well as away from the main stack, so that they push the booster down and away so my main stack is clear pretty quickly.

13
How can I calculate the right number/types of parachutes for my craft?
4
What's the air intake parts air drag in KSP past 1.0?
6
How to control a rocket?
4
Change radial decoupler orientation or attachment part
56
My large rocket is still flipping over
35
How to keep an airplane stable on the runway in Kerbal Space Program?