How to conquer India in EU4?

I am playing as Portugal and my goal from the beginning of the game has been to conquer the entire Indian subcontinent (or at least a very sizable portion) by the game's end. I thought this wasn't too ambitious, and indeed by the beginning of 1600s I held south India. I thought the nice casus belli I acquired earlier in the game to be able to freely conquer Asian and African primitive nations would work nicely. However, something set me back significantly. Since I held Goa from very early in the game, three Indian nations holding about 1/2 of India westernized (picture below, see the icon to the right of Bahmanis signifying technology group). This was apparently because they bordered a nation that was Western and significantly more advanced than they were for a very long time (I acquired Goa early 1500s).

Now my casus belli is gone and I need to fabricate claims for every single province. Not only that, but being westernized, their troops will be much more advanced (and since this is India also very numerous - their numbers were already challenging before westernization and I had to acquire alliances in India to this end). 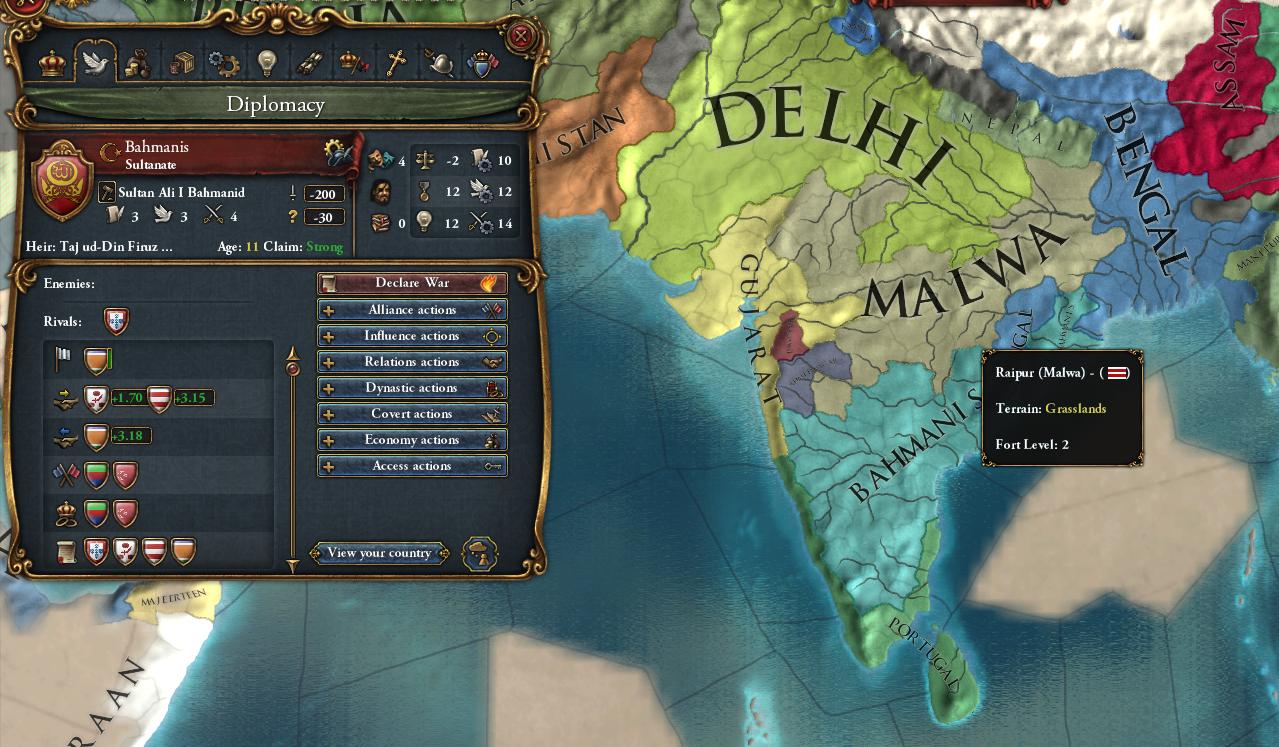 I think a very important thing to keep in mind in this situation is that even though these Indian nations may have westernised, their troops will still be vastly inferior to yours as westernising does not give them western units. I have westernised as Ottomans and Russia and have always been stuck with the same troop types I would normally have had. Seems safe to assume the same restriction is valid for AI nations.

If you've been playing this game with a specific goal in mind, I see no reason at all to give up on it. Just create the claims you need and take them out. If the number of provinces and the attached cost in peace settlements threatens you, just develop the "Flexible Negotiations" Idea combined with "State Propaganda" to allow taking massive amounts of territories per war without having the whole world gang up on you.

As for the AI question: there is no way to prevent a non-western nation bordering on a western one that is far more advanced from westernising. You can give them a truly hard time DURING the process though. Having gone through westernisation a couple times myself I can only assume that an AI nation going through that process is also hugely vulnerable.

The game tries to mirrow the reality regarding strenght in this time. And there is a reason, why Portugal did not conquer India, but Great Britain. Portugal is too small and has too few armies. You saw this by yourself. If you give a Nation too much time, after you conquered the first area, they westernize and get too difficult to invade. You must be fast at the beginning. If this is not possible, try to concentrate on other areas, like Indonesia, as it was historically. If you really want to conquer India, then either take another nation, like England/GreatBritain, or Spain. Or you do it a bit later, when you have the better cards. Don´t take an area close to them, so they have no chance to westernize. When you feel strong enough, make the invasion in one rush.

7
Where are screenshots saved in EU4?
6
EU4 production interface cut off
4
How do I make a free city as the HRE in EU4?
1
how do you enable and watch timelapses in eu4?
6
EU4: Why is my personal union ending?
2
How do I get boats as a primitive nation in EU4?
1
How to deal with institutions in EU4?
1
I cannot annex Indian state, only "force migration"
3
Which DLC I need to concentrate development in EU4?