There is a ds game I am wanting to buy on ebay, but the seller is from france and the ds cart is PAL. If I put the game in my ntsc 3ds or ds lite, would there be an option to change the language to english?

As Nolonar mentioned in the comments, usually PAL DS games include English, French, German, Italian and Spanish. The languages are usually stated on the back of the box.

Keep in mind though, that the Nintendo DSi and 3DS are region locked, and games from the PAL region can only be played on systems from the same region. The original DS is not region locked.

In your specific case of "Yu-Gi-Oh! Nightmare Troubadour", all of the above languages are included: 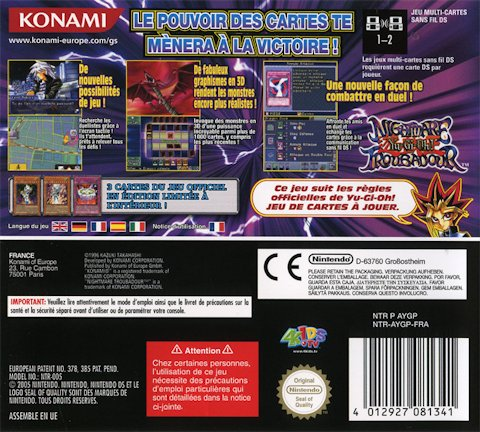 0
Where can I get a replacement DS Lite battery in Germany?
3
Game compatibility on Wii
20
Can I play DS games from any region on the 3DS?
3
How to change my monitor display from PAL-50 to PAL-60?
2
Changing Xbox 360 display settings from PAL-50 to PAL-60
5
Xbox account region change - what about NTSC/PAL?
3
Is an NTSC game ok for PAL PS4
1
Is Pokemon Mystery Dungeon: Explorers of Darkness region-locked?
1
Can't start a new game
3
In what exact manner does an NTSC SNES game differ from being played on a PAL SNES+TV?