Foreigner son-in-law went on a killing spree, then formed a militia just to stand around for awhile... did I miss something?

I'm working through my first, long-term play-through after dozens (or, if I'm being honest, hundreds) of short attempts to figure out the mechanics. I'm finally getting into where some weird stuff is happening and I feel like I missed out on something.

I'm playing as a West African count in Oualata. I married one of my daughters matrilinearly to some young chap out of the Canary Islands and he came down and lived pretty quietly in my court for several years. Then there was an epic 12 month period where he seemed to go berserk.

My wife, the spymaster with an intrigue of 23 scheming at home, was murdered on his orders. No event said so, there was never any warning about it, nothing. Just that sad, red little skull saying she was murdered by him. I tried to lock him up but didn't have a righteous imprisonment (which doesn't really make sense, but whatever) and based on my state intrigue, there was only a 25% chance of getting him. There are plenty of other women in the area and I could use some more prestige boosts from marrying them, and I really didn't want that guy to get away and plot against me from somewhere else, so I married up another spymaster (20 intrigue) in another court, appointed her and set her off scheming.

1 month later, she was dead. Murdered by this same guy. Not so amusing, but hey, more prestige from marriage. No biggie.

Well, I ended up clearing out every spymaster in West Africa. In 6 months, he killed 5 spymasters, all with 20 or greater intrigue. The amusement came back at this point because now nobody in the kingdom had a spymaster with intrigue better than 8, but somehow this dude killed off the best spies in the kingdom. In 6 months!

He laid low for 2-3 months and then I got an event. This guy, his name was Mula, was going to form a militia or something called Mula's Host and he was going to take over the Canary Islands. The only choice was something like "Yeah, okay, you go do that...", which was quite fitting because we're literally in the middle of nowhere and there's absolutely no boats anywhere in the kingdom. So his band of 2000 big, tough baddies stood in Oualata as their numbers dwindled due to supply problems I guess, for 5 years until they were all dead. In the mean time, when I moused over my heirs, it would say "Heir to Mula's Host" rather than Oualata.

So clearly, this dude was up to something all along and didn't want my spymasters to uncover whatever his plot was. It was a pretty busy year for him. This is what he looked like: 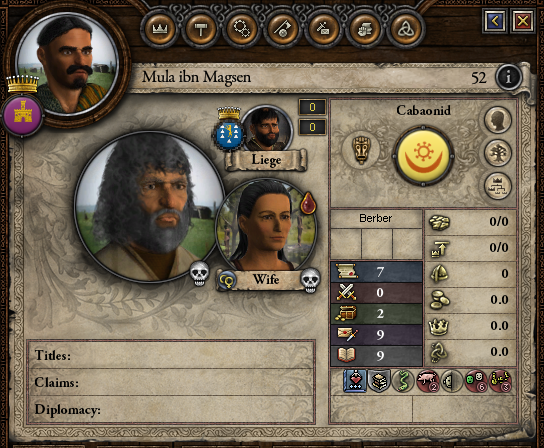 What plot event was he working on? Why did he go crazy and kill everybody, just to form a band of angry men who declared war on an island when they didn't have boats and they just stood around until the died in the desert? Why did my heirs show that the title they would get was called Mula's Host rather than Oualata?

As with almost everything that comes up in this game, I feel like I missed out on something here.

Well the inheritance can be complicated but basically (making some assumptions since I don't have a screenshot of his living profile) he had a claim on the islands.

Unlanded characters with a claim on a holding might (random event) start a war with event troops (which will be named with this "host" thing). When they are ready for war it will send a message to their lord (but the lord has no choice in the matter)

Because he then joined your family, his temporary title would go to his heirs which happened to be yours as well.

Since he couldn't actually move his troops to the objective (which his more or less a bug) he ended up losing the war because he couldn't get any warscore.

As for the scary killing spree, I assume it is some bad (or good) RNG that ended up in that, as far as I know there is no event (even not announced as such) where a guy shows up at your court and kills everyone.

And last point you shouldn't set your wife as a spymaster since it will bring you a smaller total bonus than if you had a different spymaster (the +50% from the wife isn't counted in this case). The second reason is that she might kill you if she feels like it (while a guy you keep giving gifts to tends not to).

15
Can I disown my heir?
11
How can I claim a duchy from an unrelated courtier, and keep the duchy in my kingdom?
15
How to rig an election?
5
Way out of the war I offered to join?
14
How can I support the murder-plot of another character?
4
What does a person's death caused by assassination without your knowledge look like to you?
5
How to let someone continue his original plot when spymaster survived an assassination attempt?
2
Revoking bishoprics without opinion penalty
2
Viceroy must be feudal - when is this possible with pagan empire?