How can the damage value of elemental effects be weighed?

Let me start by citing the specific situation that prompted this question.

Early in the 1st Borderlands (limited carrying capacity) I had to choose between 2 sniper rifles. The first had 198 damage, but 4x Explosive Element Effect; the second had 247 damage AND triple the fire rate.

I've looked online but can't find any tables or explanations of the damage value of any of the elemental effects (including increased chances i.e. 1x 2x etc.), so that i could compare the weapons.

So, does anyone know how this is calculated?

Elemental weapon damages are a bit tricky. Have you noticed that sometimes the weapons will make special effect based on the element? For example when using shock weapons sometimes a lighting-like explosion will appear. Those special appearances of effects are called elemental effect, or "proc" (short for "programmed random occurrence").

Now as you have noticed there are different multipliers of elemental effects on elemental weapons, those multipliers affect the damage dealt to a target when a proc is triggered. Now this damage is affected in three ways.

First, some elements are more effective than others on certain targets. This comes from the following coefficient formula: 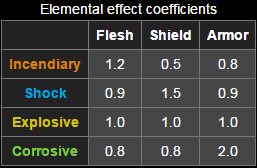 So for example, an incendiary proc will deal 120% damage to flesh, but only 50% damage to shields.

Skags - Vulnerable to incendiary, with the heavily armored Alphas susceptible to corrosion. Spitter and Elder Skags are naturally resistant to corrosion, however.

Spiderants - Resistant to all elements. Corrosive damage will degrade their armor from the front, and smaller varieties will succumb to critical hits on their abdomen via explosive blast attacks.

Scythids - Resistant to all elements.

Bandits - If the enemy has a shield, a shock weapon can quickly deplete its charge. If an enemy is unshielded or once the shield is depleted, an incendiary weapon is the most effective elemental damage. Explosive works well either way.

Guardians - Vulnerable to shock, due to their strong shields and low health.

Crimson Lance - Vulnerable to corrosive damage due to their heavy armor. Corrosion proceeds more efficiently once shields are down. Corrosion resistant varieties are susceptible to incineration or electrocution. Resistant to explosive blast.

Claptraps - Vulnerable to shock due to their metallic construction.

Now, whenever a weapon procs, a certain amount of elemental damage is added based on the current element's damage multiplier: 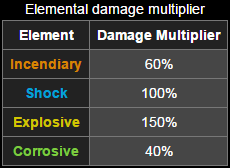 Based on the information above you can figure out, roughly, which weapons is better and for what. However if you want to calculate exactly the damage dealt we need a second multiplier, called the weapon proc multiplier. This multiplier varies between weapon types and elemental levels, ranging between 1 and 2. For the purpose of your question, I believe the above is enough. But if you want more, you can check the source to get the specific values.

Given all of what was stated above, the formula to calculate the total damage of an elemental weapon would be: [Total Damage] = [Weapon Base Damage] + ([WBD] * [EDM] * [WPM])

19
What is the maximum level a character can reach in Borderlands?
22
How do I interpret the weapon damage stat in Borderlands?
6
How can I find out what missions are available in Borderlands?
7
Can I save the claptrap in the cage?
9
What does the x1 elemental damage mean?
5
How can I tell if I a weapon has been modded?
0
How can we restart a game?
7
In what order should I put my skill points if I want to maximize the damage that Roland's Scorpio Turret inflicts?
1
Can artifacts gain levels and if so, how?
2
In Borderlands 1, how can I see the chat?