Are all weapon types equal until you choose a weapon talent?

I know that when leveling up you sometimes get the option to choose a weapon proficiency. Until then, does my character fight equally well with each weapon class?

Does the same answer hold true for recruited characters, so that i.e. Aloth the mage (who doesn't have any weapon related skills) can fight equally well with a staff compared to a battle axe?

Yes. Pillars of Eternity does not have class based weapon proficiencies, everyone can use every weapon and no class is "better" at any weapon, unless you take weapon talents.

Take my current Aloth for example. I equiped him with a bunch of different weapons from my stash. He has no weapon focus, and his Accuracy with the following weapons is:

As you can see, his accuracy is consistent accross all weapons, with any difference being due to either the bonus for a using one single hand weapon, or the weapon having an accuracy based trait.

Both created and recruited characters will not be better with any particular weapon unless they have weapon talents (my Eder started with Weapon Focus: Ruffian).

Any character can use any weapon with equal proficiency...

However, not all weapon types are created equal. Some weapons, as Michael Campbell notes, have differing accuracy values. Others do variable amounts of damage. Some attack faster than others. And of course, various weapons do different types of damage, and some enemies are more or less vulnerable to, say, Crushing damage than Slashing damage.

You can compare weapons with this handy chart: 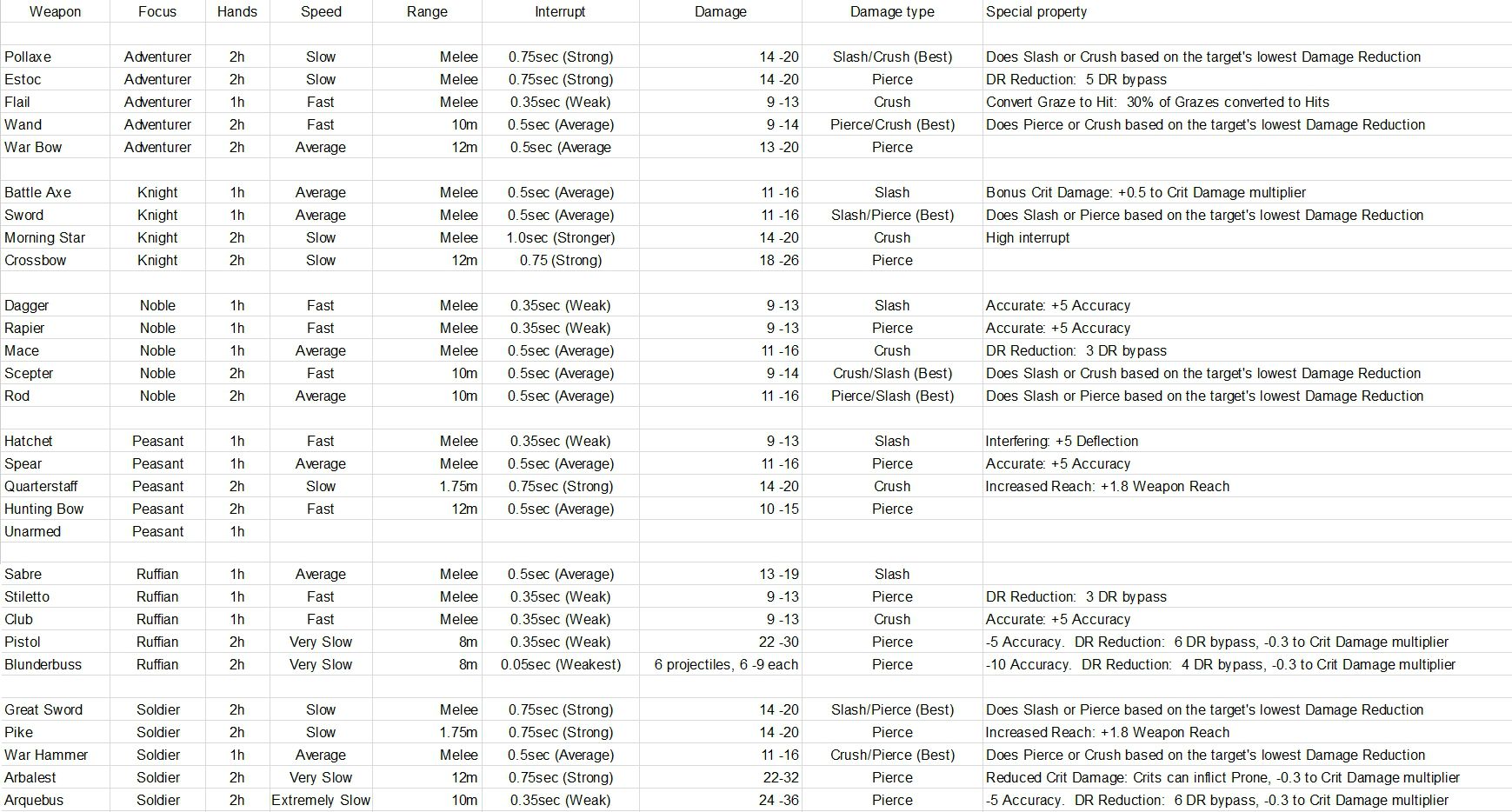 Furthermore, as Michael Campbell notes, there are additional benefits to specific 'styles' - using a One Handed weapon alone with no weapon or shield in the offhand provides a substantial accuracy boost. Using two one handed weapons (dual wielding) provides a boost to attack speed. There are also Style Talents that further increase these benefits, or the benefits of using a Two-Handed weapon, a Ranged weapon, or a One Hander and Shield.

Additionally, some weapon types have more synergy with certain character classes and builds than others. For example, Wizards have access to talents increasing their damage (and adding a small AoE) to attacks from a Scepter, Rod, or Wand. Aloth starts with this talent, and he's pretty fragile, so you probably don't want to give him a Battle Axe. Ciphers have a talent called Draining Whip that adds +2 focus gained per hit - this talent works well with fast weapons, but it works even better with a Blunderbuss, where each of the 6 pellets will trigger this effect. Monks have a variety of skills that only work with a melee weapon, and still other abilities are not usable unless they take some damage, so while they can use a War Bow just fine, it's probably not a good idea when they could be using a Hatchet (or running unarmed with their bonus to that damage).

No class or character is ever penalized for using a certain weapon - but there are a variety of reasons - even without taking a Weapon Focus talent - that one might be better than another for a specific character. (Though you still have substantially more freedom than you might be used to in games like this - and plenty of unorthodox setups are very strong, even optimal - Rogue with an Estoc, barbarian with 2x Stilletto's, Monk with Hatchets, or Paladin with an Arquebus, for some examples.)

Not the answer you're looking for? Browse other questions tagged pillars-of-eternity or ask your own question.

3
Does the Larder Door work with the Two Weapon Style talent?
11
Who are the recruitable Companion NPC's, and where can I find all of them?