How can I open this armored vehicle in GTA-V? [duplicate]

Michael was driving around flat-broke when he passed his first armored truck, so he shot out the tires and the driver, then jacked the truck and took off with rims ablaze. After a near never-ending two star chase the truck is his, but he only has small arms and can't afford any grenades (stronger munitions are still level-locked).

So how could one break open an armored truck without adequate explosives? 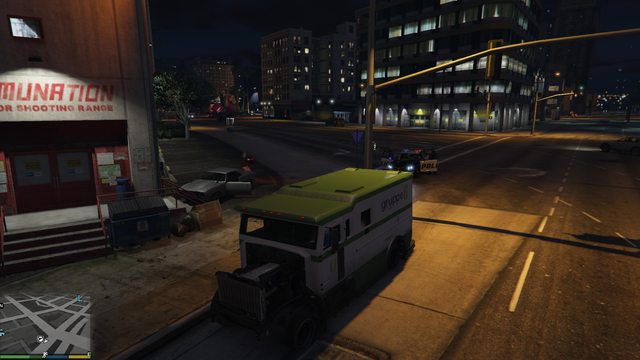 There's the truck. Michael is actually in the driver's seat, the shootout in the back is completely unrelated.

Ways to open the doors:

Stealing a police car usually adds a shotgun to your weapons inventory.

After you can see the engine without protection by crashing the truck, shoot the engine till explosion.

And maybe you can check on this: How do I open a security van in GTA V?

Go to the beach and find a small bonfire. Park the truck over the fire, walk away as it burns and explodes then you are golden.

Blow up the engine, or like other people have said, use the shot gun to open the back doors, note, using the shot gun takes a while, but if you just blow up the car, the money goes every where & the cops are called. Just note they both work but they both have flaws

light the truck on fire with a jerry can(found at certain gas station). When it explodes, the briefcase will just poped out of the truck. 2 stars will appear. :)

24
How do I open a security van in GTA V?
7
How can I add more cars to the Special Vehicle list?
3
How often do armored trucks spawn in GTAV Online
3
Can I store armored trucks in my garage to loot them repeatedly?
7
How do I hotwire a vehicle faster?
0
Can you play GTA 5, haven't played GTA 4?
1
"You have nowhere to store this vehicle"
4
Can't access special vehicle list in gta 5
2
GTA V Vehicle Storage