Lasers! How do they work?

I'm referring, of course, to the Laser towers in Defense Grid: The Awakening.

I stumbled upon Defense Grid: The Awakening's very detailed steam stats page, and noticed the following: 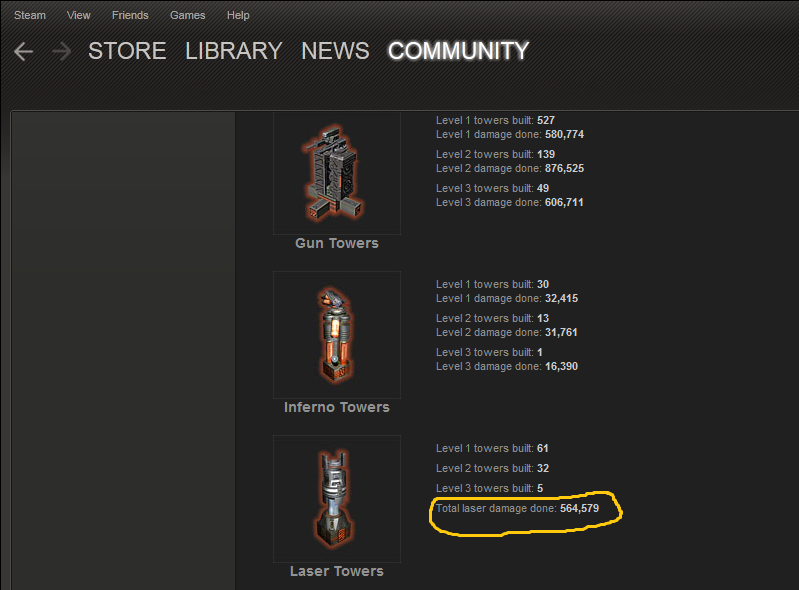 This of course, perplexed me. All the other towers have specific damage totals for their level 1, 2, and 3 verisons, but Laser towers just have a single number. This made me wonder how Laser towers actually deal their damage. Do they do initial damage at all, or is the DoT the only effect they provide (and if that's the case, why does upgrading the laser tower increase damage as per the tower stats screen?). Is building more than one laser tower in a single area inefficient?

Interestingly, I've heard the AI Narrator perform his "Death by laser tower" taunt on maps where I had no laser towers, but did have meteor and/or inferno towers (which also have a small DoT effect?)

Anyway, can anyone shed some light on this topic?

Look dude, I am the world's #1 laser expert, and I wrote the world's greatest review of Defense Grid/Lord of the Rings on the Internets.

Now that my credibility is no longer in question, I am going to tell you something that is my suspicion (which I have gained from some of the photons and from having fired a lot of lasers in my time), which is that the laser towers in The Two Towers confer some kind of "heat level" to the enemy alien jerks who need to die.

This "heat level" dissipates over time, and while the "heat level" of a stupid alien is more than zero, some proportional number is subtracted from the alien's health points. This indirect heat damage is impossible to track by turret level, because a level-3 turret's heat level eventually dissipates down to a level-1 turret's level. And a level-2 turret could have exacted horrible burning photonic justice against the extraterrestrial foes in the mean time.

So since the damage isn't instantaneous like it is with most other towers, you can't deterministically calculate which lasers are responsible for what damage. But you can tell that the damage was caused by a laser tower, so you record them all together in one big bucket of fiery alien death.

It seems to me that if laser damage happens indirectly (as implied by the "heat" in the other answer), the same way that force acts on an object, to accelerate it, then the games simply not bothering to track such indirect heat damage, and this simplifies the game code.

Lasers of class 3 may damage targets 30% more than lasers of class 2, or any amount of difference really, but all they are really doing directly is charging up the units ability to hurt itself. Since it seems lasers must really charge up a targets "harm-myself-o-meter", I wouldn't be surprised if the game's logic is written such that all targets are self-harming, and for indirect (fire damage) purposes, all tower defense game targets have this non-linear indirect iterative damage system.

Now imagine explaining this to your physics teacher. Lasers charge up your built in ability to hurt yourself, and that's why you shouldn't stare at one directly.

In conclusion, I had to this answer because the first one was so much fun, and the guy who wrote it is so cool, and so I wanted to be on the same web page. I hope you don't mind.

Not the answer you're looking for? Browse other questions tagged defense-grid-awakening or ask your own question.

7
Are my towers refusing to shoot each other?

9
How are points calculated?
7
Are my towers refusing to shoot each other?
20
How do I get the Flurry achievement?