When do mobs despawn in Minecraft?

I understand monsters only spawn in a 9 x 9 grid of chunks centered on the player, and I assume they stay around while they remain within that distance of you. But do they despawn as soon as you move away from them? Or do they remain? If so what (if anything) causes them to despawn? Are the rules any different for passive mobs?

Will running far away from an area and then coming right back clear it of monsters?

My answer is no longer correct, even though, at the time of posting, it was. Look to some of the other answers (particularly the bounty winner) for more up to date information.

Most important rule: when a chunk is unloaded, so are the mobs (and all other items) on it, although passive mobs won't be removed.

There is also a limit on the number of mobs that can be loaded at one time: 200 hostile and 15 neutral mobs (I don't know if there's a limit on passive mobs). Also, hostile mobs are removed if they leave the 9x9 chunks that they're allowed to spawn in.

Running away will usually allow you to stay out of the reach of hostile mobs, since a chunk needs to be loaded a certain amount of time before mobs will start to spawn, but the chunks immediately behind you could have the max allowable mobs, making it dangerous at best to turn around.

Take a look at the wiki for more information.

This should apply to all passive mobs. (I checked, they all extend the EntityAnimal class.)

Wolves however are interesting:

So this means that tamed wolves do not despawn, while wild wolves do despawn.

It seems that slimes and squid will also despawn. Both classes contain this method:

I didn't see any other references to despawning.

As of Minecraft 1.8, these are the two main despawning rules:

For those who like diagrams, this image will help: (From the Minecraft Wiki) 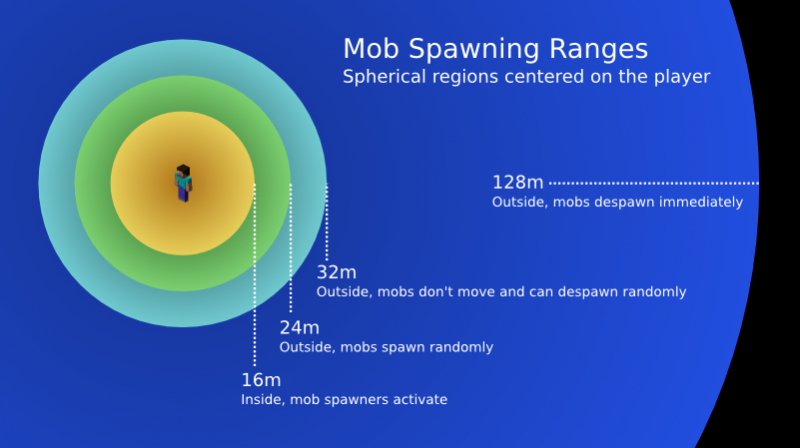 1 Not sure whether this is a sphere or a cylinder It is confirmed to be an Euclidean sphere (like the the instant despawn zone). Testing apparatus: 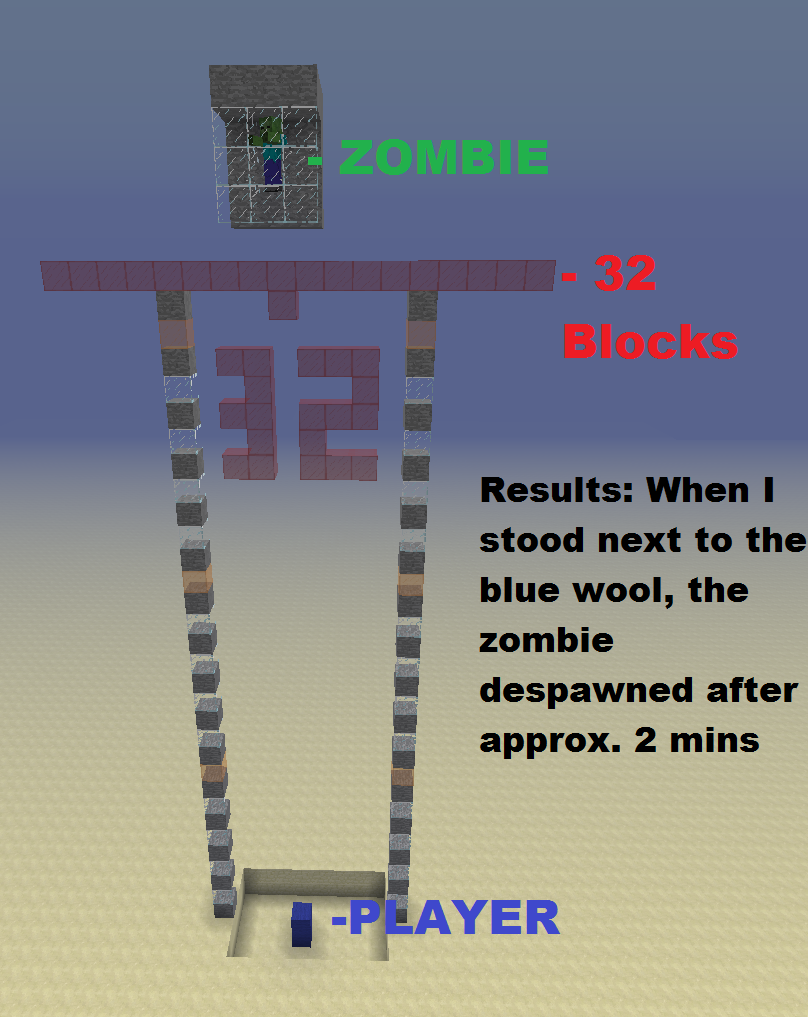 2 An Euclidean sphere with a radius of 128 blocks

EDIT: The forum post is apparently gone in one of curse's migrations of the minecraft forums. Until I can find a good suitable replacement the Wiki page is the best I can come up with which can be found here.

A quick answer to some of your questions from my own observations:

Anywho, enjoy the link, helped me out quite a bit!

As far as I know, hostile and neutral mobs start despawning automatically when you are at some tens of meters (blocks) away from them, let's say around 30, and the chances (probably) get better as you get farther.
Also, make sure not to be decieved when they get out of your sight, (at about 60 blocks away) and think that they despawned. Even if they have significant chances of doing so, sometimes they won't. So going back where an angry skeleton or a creeper was, with the hopes that it's gone, you might get surprised.

5
How long do monsters take to despawn?
7
Do Mobs Despawn in Minecraft 1.8?
0
So how far do you need to be to make the mobs despawn?
0
Do monsters despawn in minecraft
16
Chances of encountering a charged creeper?
11
Are there any blocks Endermen can't teleport through?
-1
Will zombies die if I put a light in their house?
4
Will my zombie villager de-spawn?
1
Despawning monster mobs

10
Overworld zombie pigmen spawns
6
Problems with Minecraft Spawn Trap Up In The Sky
20
What is the optimum player position respective to mob grinder?
6
Has Minecraft mob spawning been changed to reduce effectiveness of vanilla mob farms?
3
How can I stop mobs from despawning?
4
Mob grinder does not spawn more than 63 mobs
3
Mob spawner - how far do mobs need to be from the spawner for new mobs to spawn?
2
What is the maximum server View-Distance?
4
Optimal distance to AFK for creeper farm?
2
Mob farming: 240-radius of air vs. 128-radius of lit caves