How Can I Butcher Animals en Masse?

So, my friend just implemented a bunch of new mods into his SMP server, which meant a host of new commands to play with.

I thought I'd give the /mobspawn command a few goes, and see what I could achieve. So I headed off to the server's jail (I forget why this particular location compelled me), and gave it a few spins.

I seem to have made a bit of an error in judgement. 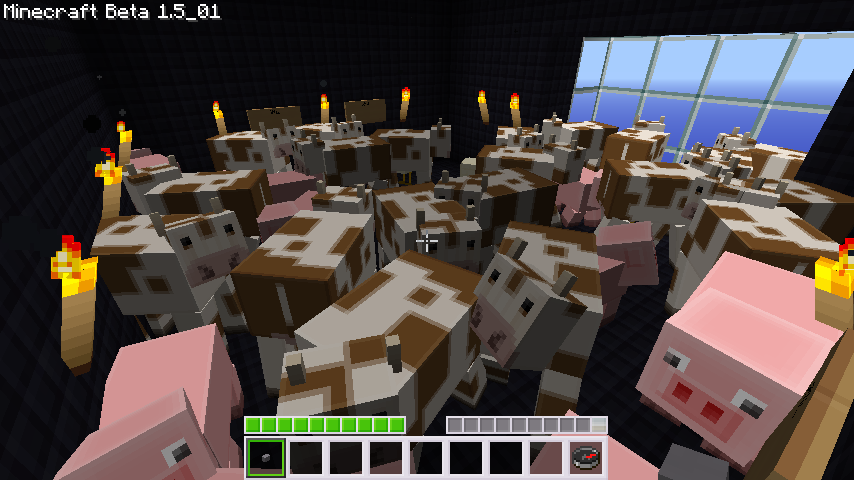 What can I do to get rid of this mess? Is there a command or some other technique I can use to clear out any mobs in my immediate vicinity?

Depending on the mods installed, /butcher [radius] should work. Of course, you'd need access to the commands to do so.

This is now possible in vanilla with a feature introduced in the 1.8 snapshots. You can now /kill animals and mobs using the @e selector. For instance to kill all the pigs in that pen, you would use

And similarly, you'd use Cow instead of Pig to kill all the cows in the pen. I use the radius specifier so that you don't kill all the pigs or cows that are currently loaded in your world, just the ones that are within your vicinity (10m). Note that there's only one space, between /kill and @e, in this command. Adding additional spaces will cause the command to not parse properly, and will not only kill you, but possibly every other entity that's loaded in the world.

Place some water, and TNT in the water (make sure you aren't replacing the water), and light it. TNT in water will do no damage to blocks (leaving your jail intact), but full damage to entities (the unwanted animals). Do not place more than two TNT at a time, as explosions might blast other activated TNT out of the water, allowing it to do damage to blocks.

Note that the TNT will also damage any minecarts, boats, or loose resources in the area, whether or not there is a clear line-of-sight to them.

Get some stone swords and button mash!

If you are in creative, turn into survival, then use a sword and just kill them, if this takes too long, well, I have no idea, I am having the same problem on my server right now too, somebody spawned thousands of chickens and i cant kill them all because of the lag.

This may not have been an option at the time the question was asked, but one as-yet unmentioned method to try is to throw a bunch of Splash Potion of Harming (II). Do note that if this same situation were to occur with undead mobs like zombies or skeletons, Splash Potion of Healing should be used instead.

This method tends to work best if you are in creative mode, as the splash potion will not be removed from your inventory when used, allowing you to easily rapid-fire carpet-bomb the infested area. It can be considerably quicker than manually swording every single mob in the area, doesn't rely on commands that may not be available to you, and works handily in protected areas where you cannot place blocks.

@MBraedley's answer is good if you don't have any mods. However, as of 1.12.2 the no-mod vanilla syntax is slightly different:

Where r is the radius. "distance" was not a valid option for me.

If you do happen to have a mod with the /butcher command, here are additional options you can pass:

For pigs, make a pit of lava around you then hold a carrot/carrot on a stick - they will come to you and burn.

20
How do you breed animals?
12
How can I make animals unkillable?
14
How can I transport animals over long distances?
5
How often can animals breed?
7
Unloading animals from minecarts
12
How to separate adult from baby animals?
3
How can I turn off animals in creative mode?
1
Skyblocks Animals
2
Why no animals?