I have a collection of old games in a CD (from year approximately 1995). One the games included is Heroes of Might and Magic 1. I would like to get this game working properly on my computer but so far I haven't had any luck. I googled and tried DOSBox with newbie instructions but I couldn't get it to work. I only got a message "This program cannot be run in Dos mode" from DOSBox. I attached a picture that highlights what my game folder includes etc: 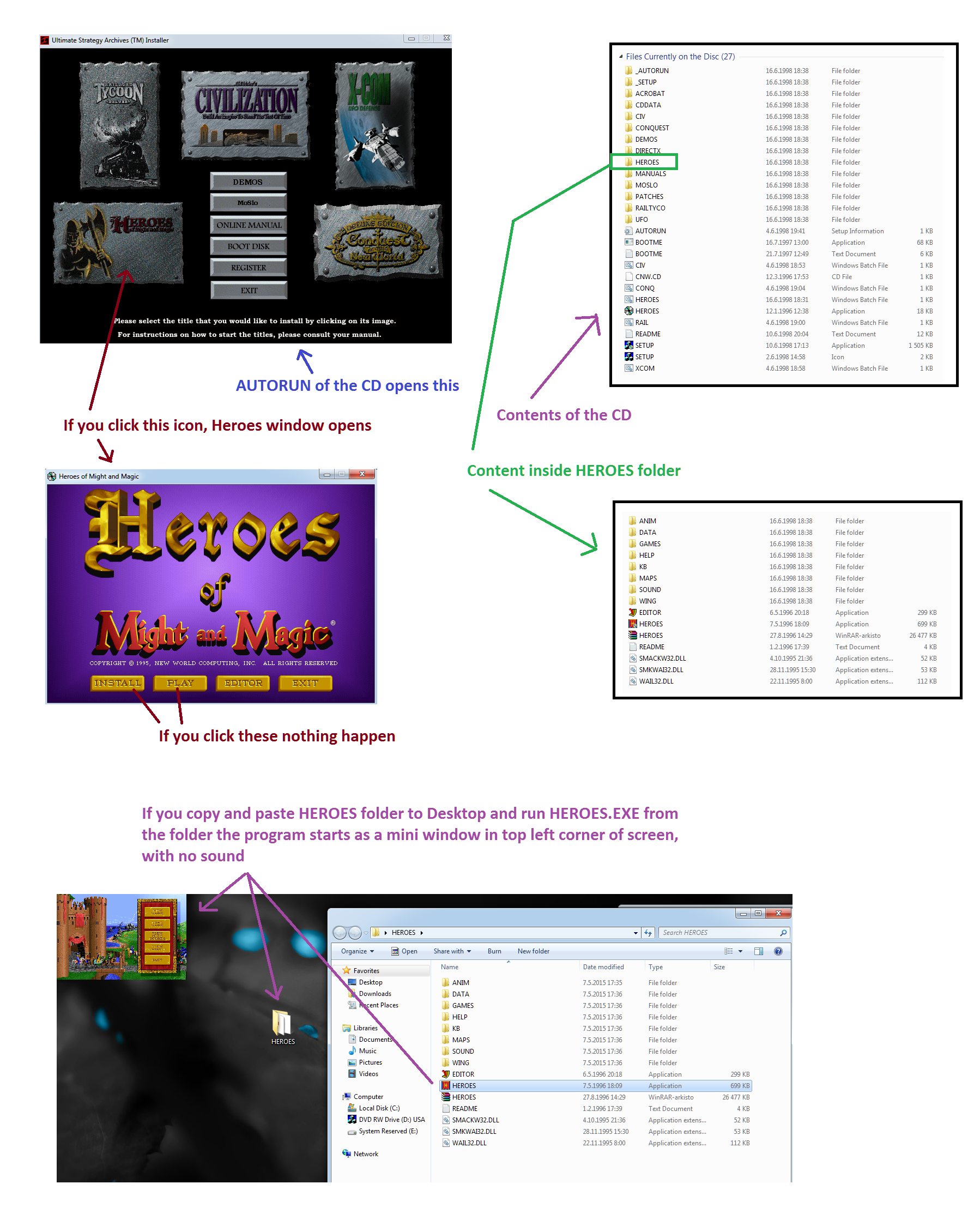 Thank you! P.S. If there's any more information you need, please ask.

My operating system is:

A simple temporary fix is to press the F4 key. That will change the game to full screen. You can then start the game and enable sound and maybe music. The original version Heroes of Might and Magic used CD-Audio tracks, which probably didn't fit on your compilation CD. It may work with the 8-bit music tracks.

Unfortunately it won't remember these settings and it will likely crash on exit. You might also not be able to save the game because when you copy files from a CD-ROM by copy and pasting them in Explorer they're marked as read-only because the CD-ROM is read-only. You should open your C:\ folder in Explorer, right click on the HEROES folder and select properties. In the property dialog uncheck the "Read-Only" check box and press the OK button. Press OK again so that everything in the folder is made writable. (This step might not actually be necessary, but older games expect to be able to write to the directory they're installed to.)

However the big problem with how you installed the game (simply copying the files from the CD) is that the game's registry settings are missing. This why it starts up in a tiny window in the upper left, why there's no sound or music and why it won't remember these settings after you change them. So you need to create these registry settings yourself. To do this start Notepad, paste the following into it, and save it as a file named heroes.reg:

Once you've saved the file, double click on it in Explorer and after asking for confirmation, it should add the necessary settings to the registry.

There's one other potential problem that you've seem to have managed to avoid. The file WING32.DLL needs to be installed in the Windows system directory. If it's not installed the game won't run and it'll will complain that the file is missing. Since you didn't receive this error you must already have this file installed on your computer. For anyone else trying to get HOMM1 working on a 64-bit version of Windows you need to copy the WING32.DLL file in the game's WING subdirectory to C:\Windows\SysWOW64.

HOMM has 2 versions: one built for Dos, and one for Windows. You tried running Windows version in DOSBox. I'm not sure can you get the Windows version to work on Windows 7, but you can run the DOS version normally in DOSBox.

If there is no other way to run it in Win 7 (compatibility mode and such) then you need old Win system:

Not the answer you're looking for? Browse other questions tagged windows-7 backwards-compatibility windows-95 heroes-of-might-and-magic .