How rare are the "rare biomes" in Minecraft?

How rare are the biomes like Mesa or Jungle in the newer releases of Minecraft?

I've mapped out at least 10 largest zoom maps (1000x1000 each) and didn't get to find a single Mesa. Is it just my bad luck or are they really this unique? Maybe some hints from terrain generator code, as to how frequently are they spawned?

There are differences in the chances. Most of the time, you do not get mesa or jungle biomes because of the fact that there are 61 different biomes. (Source here) Sometimes, it could be due to conditions needed for it the biome to spawn. For example, the mushroom biome can only spawn in an ocean biome and a river is usually seen next to a beach biome. This means that there is around a 2/61 chance for the biome you want to spawn in. If you think you get many plains biomes, look at the F3 menu again. There are 3 different types of Plains biomes(Plains, Plains M and Sunflower Plains), and other biomes also have different variants. Currently, there are 3 types of Mesa Biomes that can spawn in. As for the jungle, there are 5 different types. This also means that you only have a 8% or less chance of a jungle. Also, from the mojang website, they released an image: 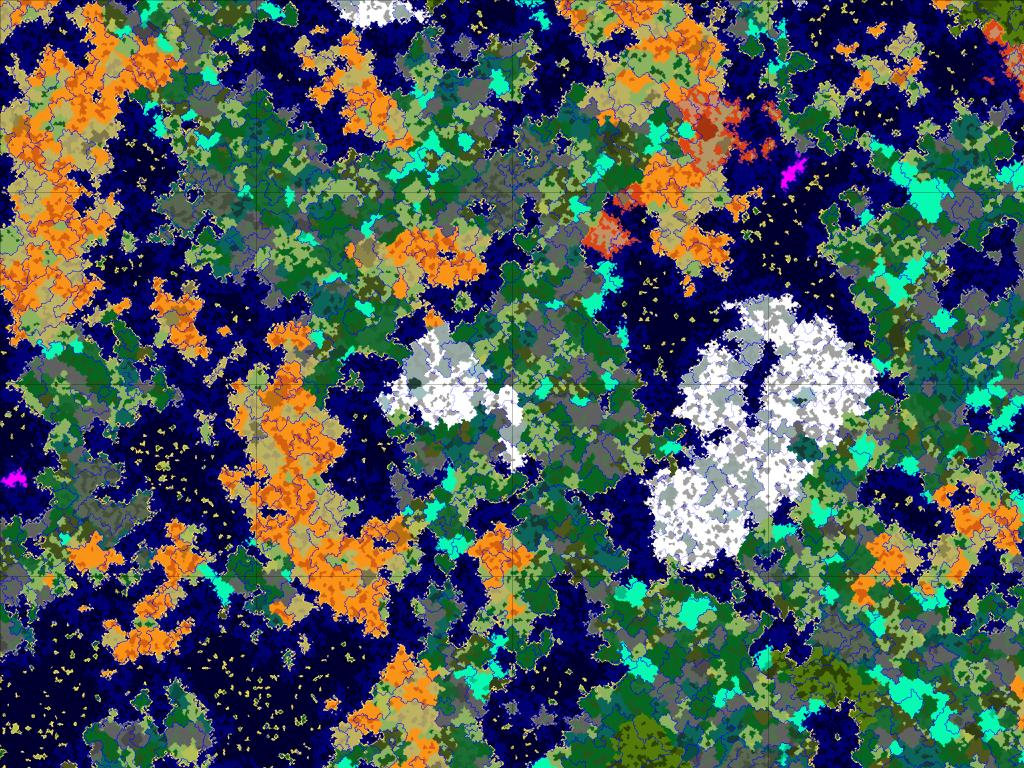 Notice that some colors are appearing more often that others. This could also mean that there are different chances of biomes spawning. For example, orange, white, green and blue take up majority of the space in the map, while red and purple take up very little space. If the conditions are followed, the blue probably means ocean, green for plains and white for snowy. Red could be mesa, purple could be mushroom islands.

Jungle biomes have been made much rarer.

This could be another reason why you are not getting as many jungle biomes as the other biomes. This is true for the mesa biome as well.

As of now, I cannot read the code for minecraft(Still in SRG names). However, when I can, I will edit the post. Quote from MC wiki:

It could also be your seed, try going online to search for mesa or jungle seeds.

The map in @UniversalElectricity's answer is from http://chunkbase.com/apps/biome-finder You can also enter seeds and find biome locations at http://mineatlas.com/ (note that for MCPE, these only work with positive seed numbers below 2 billion something.) Biome rarity depends on what it is next to. For example, Savannah spawns next to desert. Deserts can get very large, as can "temperate" biome collections. Some biomes are larger than others - ice plains can get large. Savannah, jungle, and Mushroom island are indeed very rare, but all biomes can usually be found within 8K - 10K blocks of spawn, most often closer. Some biomes are very common, even though they are small - forests, extreme hills, and plains are examples.

Mesa, mushroom, jungle, ice, and spruce are the rarest but we totally underestimate how easy it is to find one.

Example: Even in creative mode we might go forward flying looking for one but one slip of a finger can turn you right back around in survival one might run from mobs or turn to avoid a mountain and go in circles when one could be just up their another example as if you were in a jungle or mesa it would be just as hard to find dessert or grassland or savanna as I have spent hours in mesas and jungles trying to get out other rare biomes such as spruce and ice are literally tiny and it will be easy to find another biome other biomes will also take a long time to escape

Well personally the rarest biomes i have found are mushroom islands and Jungles, could never find either off them, then found them both yesterday! I spent most of my time on the boat to find cool biomes, including mesa which i recently found. Deserts are fairly common, and almost always have temples or sand villages. Hope this helped ;)

LouieLouie
1
1
Add a comment  |
Highly active question. Earn 10 reputation (not counting the association bonus) in order to answer this question. The reputation requirement helps protect this question from spam and non-answer activity.

17
How do Minecraft biomes work?
6
I've just happened to come across some biomes, and I want to know how rare it is

10
Changing Minecraft Biomes
17
How do Minecraft biomes work?
10
Where are biomes saved in minecraft?
4
What are the NPC homes in swamp biomes?
1
How rare are Emeralds in minecraft?
7
How the snow/ice patches in mountain biomes are calculated?
2
How rare are brown pandas?
6
I've just happened to come across some biomes, and I want to know how rare it is