What is the Elo hell? 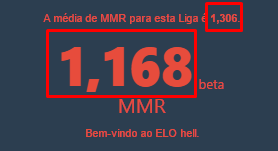 What is the ELO hell?

Some people pretend that Elo-Hell is a place you can't escape, because you always play with bad people. It's very hard and frustrating to get out of because of continuous feeders, AFKers and leavers.

I say it does not exist, because there is Elo-Boosting. If those people can climb the ladder, you can do it too! You just need to improve and the fact, that the chances are higher that the enemy team has the troll are higher debunks this argument.

This sounds mean, but Elo-Hell is just a excuse for people that play bad.

If you have a win rate >50% you will climb. If you climb, you will be matched against and with better players (normally... but there are few exceptions). If you want to climb even more, you will need to improve because you must play better against those people.

Origin of the word "Elo Hell":

In Season 1, there weren't LP (League Points) like today. You were measured by a value called elo, which was borrowed from chess. The starting value was 1200, if you won a game, you gained elo, if you lost, you lost elo. Obviously, bad players gathered around 800 Elo and below (which was compareable to Bronze today).

Since League of Legends is a teamgame, you always have to rely on teammates, it's almost impossible to carry a game 1 vs 5 (I think i did it 4 times where i actually solo'd the entire enemy team, and i got almost over 6k games now, so you can imagine the chance of doing that) and also, it's easier to blame your own mistakes on them. And suddenly, the "Elo Hell" was born, a place for kids who think they play a lot better than they actually do.

Typical for someone who says he's in Elo Hell is:

Of course, all of that is nonsense. Once you're good enough, you will climb automatically. Yes, if you sit at such a bad elo, it will take you a while until you get a decent amount of LP and doesn't lose that much anymore if you lose. But you will climb if you are above 50% - that's a rule.

A slightly different point of view on "ELO Hell" - I do think it exists, and it's personalized for everyone :) I am however a Dota player, so bear with me on the terms (most should be easily clarified in Google).

My view is that it's (apart from ragers who blame their team for every loss, period) because different rating levels have different meta.

To illustrate (meta examples from before the May patch):

The thing about all this is that if you go sharply down in MMR due to a losing streak, you little brother finding out your PC password, a major patch or just not playing in a while, you find yourself in a completely different environment.

If I tried playing in a 2k MMR game right now I'd likely lose. Not because I'm bad, or paid for my account, but rather because I don't know how to play that meta. It would be a shock to find that a fast-bottle Meepo doesn't really work when there is no courier to get that fast bottle. Likewise, a hard-farming AM won't do the team any good if no one helps stack the forest. Trying to use any of the higher rated meta will fail completely - there's no use to brilliantly stand out a solo hardlane, if your team can't zone out and suppress the safelane. Creating space for your carry is futile if your team thinks it's time to push.

There are 2 main ways out:

The first is common, and essentially leaves things to chance. No one hero can just straight-up win the game, from start to finish (Up to debate really, but for the sake of the argument I'll leave it like this). You can dominate early or mid game, but late will have to be as a team. That same team that you were ignoring for most of the game. Will you get enough of an advantage so that the lack of teamplay stops being an issue? Who knows...

The second is the right way, but is immeasurably more difficult. It's always a lot easier to flame your support for putting a ward a couple of pixels off, than to learn to play with imperfect warding and teach teammates how to do it better. It's always easier to say "I know better when to push and when to farm", than it is to communicate with the team, especially when you disagree on the timing of so many things. Taking Roshan is moronic unless you've killed one or two opponents and have vision of the area (and have dewarded) in higher MMR. In lower - it's less of a risk, because there are less wards, less communication, so it might be worth it. Likewise with other decisions like farm spots, pushing, defending or letting towers fall, etc.

TL;DR
It's not about anyone's skill. It's about change of perspective - if you fall low enough and quickly enough that the metagame changes, the challenge moves from skill and teamplay with a known strategy to re-learning the game and its tactics. Most people are really bad at learning, and hate it with all their hearts.

ELO-hell is supposed to be a ranking below which your actions have no effect on the outcome. No matter what you do you can never get out of that ranking. Wins and losses will be mostly based on luck rather than your skill.

Is this true?
Theoretically no and it can be proven with math.

(Note: there are some oversimplified concepts and examples below, but the conclusion is correct)

In each game you have 4 allies, and 5 enemies.

Suppose that every player affects the game the same way (which is usually not true, since a smurf at bronze can carry easily as an assassin, but might even lose if forced to support). In other words, your role and your skill difference from the rest of the players affects your chances of winning.

That means that ideally 10% of your games depend on you (everyone's skill lvl is about the same, every role affects the game equally, etc). There is a 90% that will be totally random. 45% of it will be losses, and 45% will be wins.

Therefor, on average your win ratio will be 55% if you are consistently better than the rest of the players in your game.

No matter how many trolls, afkers, bad players you get on your team, the enemy team will have more of those on average (assuming you aren't a troll/feeder). Eventually you will climb.

The problem comes from how long it would take.

Suppose that you need 20 more wins than losses to get from platinum III to platinum II. The closer your win ratio to 50% the more games it takes to climb.

Here are some ways to climb:

Because of the statistical nature of it, there will be some deviations (that is, it might take way to long for some players to get where they deserve, but this is rather rare). And this is what causes the illusion of ELO hell.

Many players believe that they unfairly belong to their league while their in-game performance show matches a higher league, usually one above. (bronze=>silver, silver=>gold etc).

There are many reasons for that:

This information came from here, where there are other things I didn't cover in my answer.

Not the answer you're looking for? Browse other questions tagged league-of-legends terminology or ask your own question.

2
What should i do when i have low MMR

14
Escaping from League of Legends Elo Hell
6
Which tank to counter enemy picks?
1
What exactly is Elo and how does my play style affect it?
2
What is a “Pally”?
4
What are ways to train ones lasthitting skills