How do I breed Pokemon for their Hidden Abilities?

I want to legitimately breed a competitive team, but I don't know how to breed for hidden abilities unless I just breed two Pokemon who have their normal ability(s) together until I breed one with a hidden ability. Does someone know a useful trick or item I could use?

This does, unfortunately, mean you'll need to catch or trade for a pokemon of the right species with the hidden ability to begin with.

As Phil D. commented, here's some info about catching Hidden ability Pokemon with DexNav (from Bulbapedia):

At a minimum, the Hidden Pokémon screen will always show the Search Level of the target hidden Pokémon. If the player has owned the Pokémon, its type will also be displayed. When the player is close enough to the Pokémon, its silhouette and level will also be shown. Other information, such as the Pokémon's first move, Ability, held item, and potential may also be displayed, depending on the species' Search Level. If the Pokémon has a special move, Hidden Ability, high level, or high potential, an exclamation mark will appear next to that datum on the screen.

As you can see in this table, with a Search level of at least 10, and at least 2 stars potential, you can encounter a Pokemon with its Hidden Ability. 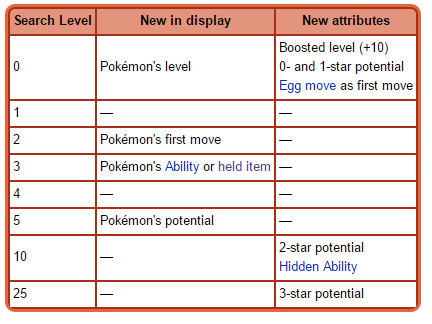 At Search Levels 5, 10, 25, 50, and 100, the chances of a hidden Pokémon having high IVs, knowing an Egg move, or having its Hidden Ability increase. Below is an approximation of these chances based on observed hidden Pokémon encounters. As these values are based on observations, the true chances may be somewhat higher or lower. 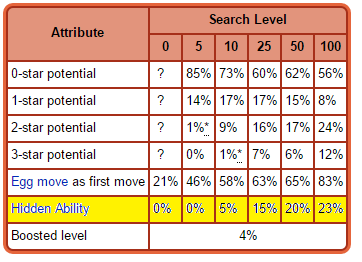 1
Breeding a Pachirisu with the volt absorb ability
0
What if I use a boy with its hidden ability and a genderless Pokemon
2
Does the ability or the ability slot get passed down when breeding?

0
Pokemon Type Encounter Abilities
9
What options do I have to record/share VS Recorder Battles in Pokemon X/Y?
4
Exact chance of a Hidden Ability Pokemon from a horde?
3
How exactly does Hatching Power reduce hatch time?
0
Are the legendary pokemon in this game better than their older versions?
5
How do I breed a Ralts with 6 IVs?
3
DexNav Shiny Chaining Questions
3
Pokemon X/Y Hidden Ability Breeding w/o ditto
2
Does the ability or the ability slot get passed down when breeding?