My highway is backing up. What can I do?

Initial note: Having read How do I design an efficient exit from a large one-way road?, the answers there do not help in this specific situation, as they rely on having lots space to spare - I have very little.

When I started my city, I designed a simple exit from the default highway that I thought was sustainable: I left enough space around it to upgrade the road as I needed to, which has worked up until now. However, I am now stuck with a six-lane one-way exit from the highway that isn't getting used: since cars seem to pick the most efficient lane to get where they want to go, regardless of traffic, the rightmost lane fills up, then spills over onto the highway. This blocks the highway, my bus routes, and more importantly my planned emergency routes.

The red arrows show road direction, and the orange line is the traffic backed up. Note that in this image, I have replaced the six-lane one-way exit with a highway exit, as this is just about as efficient...

This situation is getting to be pretty bad, and is bringing half my city to a standstill. Its effects compound themselves further down the highway: 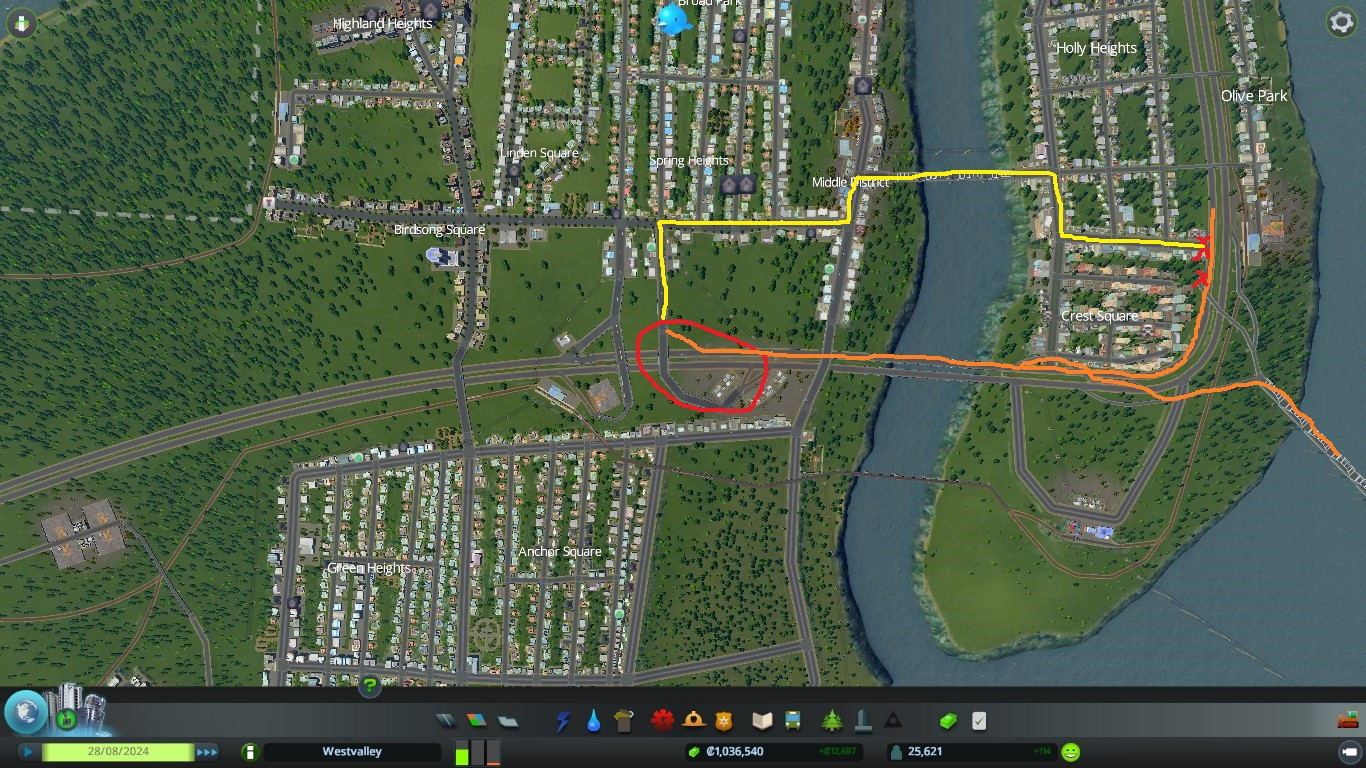 In this image, the orange line is the traffic directly caused by this exit not working. This traffic jam then blocks two exits/entrances further down, on the red crosses; the yellow line shows the traffic jam caused by these being blocked. In other words, my inefficient exit design is now blocking itself from moving.

So this is a two part problem.

To me, the root of the problem is that most of the traffic leaving this junction is trying to follow the same initial path. The first thing to do is spread the traffic out a bit.

I think the easiest way to do this is probably to add more exits from your highway - since most of the cars leave the highway at this junction then turn right, it seems to be that you could add junctions "earlier" on the highway, which that traffic can then use instead of leaving here and doubling back.

The bridges either side of this junction seem like ideal locations, as do the bridges between Holly Heights and Olive Park. Basically, put exits from your highway everywhere where there's something for them to connect to.

About improving the junction. The easiest suggestion is to change the off ramp into the main traffic flow and make straight-on route use an off ramp - this seems to be how the traffic is using the junction after all - there's a quick example screenshot I've made below. If you try this make sure the highway has "straight on" arrows for all three lanes (not turn arrows) as show by the highlighted element. 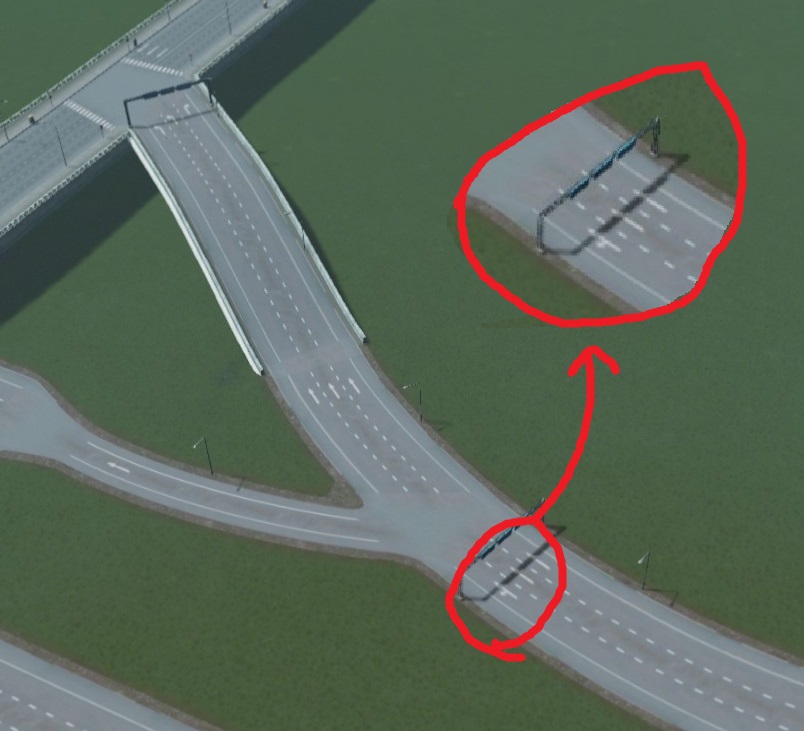 The intention of this is to hopefully encourage traffic to use multiple lanes for longer, increasing effective density. However, notice how the highway joins to the 6-lane? With most of the lanes wasted turning left (because there's more lanes available that way), making this effort fruitless so far. You could fix this by upgrading the last bit of highway into a one-way 6-lane and reducing the existing one-way 6-lane to a long on-ramp (I doubt you have enough traffic going that way to need more). Ideally you should find a way to separate out your entrance and exits roads earlier.

This might not help as much as you would hope if all the cars still want to turn right at the first junction (which hopefully adding more exits should reduce). At this point you're stuck trying to optimise that single crossroads, which is not easy, but you could try some of the tricks with one way roads I discuss in my answer to the question you already linked to. However, to be honest, at that stage you're pretty much stuck.

Finally, the cars stuck in a loop. The game will despawn vehicles that it considers stuck after a while, meaning that it will dissipate over time by itself (assuming you've remove the source). You could remove a bit of the highway and let the traffic drive into the dead end to force them to despawn earlier.

2
What is the best way(s) to deal with traffic in a highway's entrance/exit?
61
How do I connect the initial highway to my six-lane road?
8
How do I design an efficient exit from a large one-way road?

61
How do I connect the initial highway to my six-lane road?
8
How do I design an efficient exit from a large one-way road?
15
Why isn't my connections to the highway valid in Cities: Skylines?
27
How can I fix pollution?
8
What impact is there to bulldozing housing?
14
Why should I use a highway ramp?
8
How to fix highway traffic slowdown on line change in Cities Skyline?
10
What is the use of canals?