How can I properly airblast projectiles when around teammates?

As a Pyro, I'm fine reflecting even fast-moving projectiles back at the shooter-- when I'm on my own. However, when one of my teammates is nearby, whenever I reflect an enemy projectile, regardless of where I reflect it, it flies up at a weird angle (I've only noticed this with rockets and grenades as I don't get much opportunity reflect other projectiles).

Is there a way I can prevent this, as it really weakens my strategy when, for example, a medic is pocketing me, and I'm trying to reflect kill a soldier and my reflected rocket flies in a random direction?

As of the 7 July 2016 update, this behaviour is supposed to be fixed; there should no longer be any difficulty with aiming reflections while near teammates. The original answer follows.

Okay, I think I know what is happening here. This is basically a total guess, but it seems like the kind of thing that would happen in a Valve Source game.

Figure 1: A typical reflect. (I hid the rocket to see things better.) 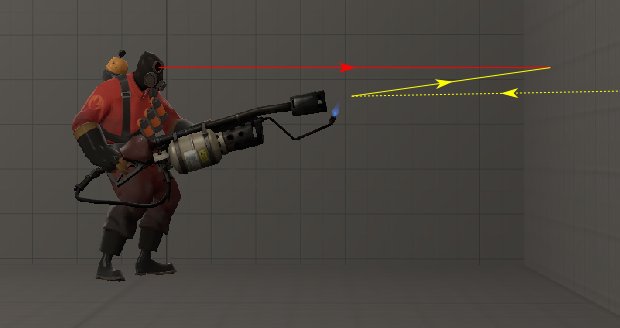 Basically, the game checks where you're looking and directs the rocket that way.

Figure 2: A reflect with a taunting Scout in your face. 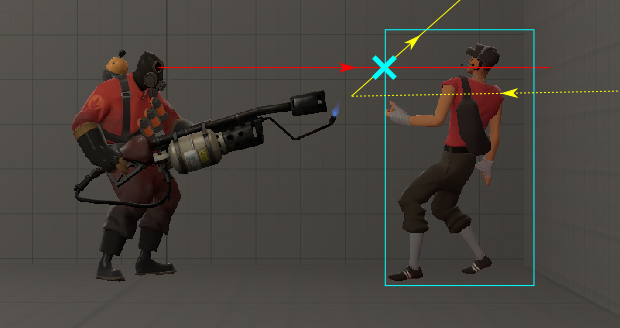 The teammate's axis-aligned world collision box is blocking your "vision", making the rocket's target point much closer to you, and so making it go a weird direction. It's just what happens when your targetting vector (your vision) isn't coming out of the same place the attack is: it happens at every range, you just don't really notice unless it's point-blank. The Wrangler is a more extreme example of this kind of behaviour.

So what can you do about this? Not much really, other than walk away from your teammates so their larger-than-reasonable invisible wall won't interfere.

Since making this educated guess of an answer, I have found this video that proves it correct.

Not the answer you're looking for? Browse other questions tagged team-fortress-2 tf2-pyro or ask your own question.

11
How can pyros actually rocket jump?
46
How can I tell teammates from spies?
17
How do you properly sticky jump?
9
How can I ensure a successful Degreaser + Axtinguisher combo?
15
As a Pyro, how can I go up against rocket-jumping Soldiers?
5
How does the huntsman's projectiles work?
2
How can I disable the Rainblower's Pyrovision effects?
3
Can rocket projectiles can go through teammates?
6
How can I Axtinguish enemy Pyros?