Did the Hyperscore actually work?

This might have been a UK-only device, but the Hyperscore (by Hasbro) was a cartridge that you plugged your game in to and then inserted into the Super Nintendo or Mega Drive (Genesis).

You played a game (e.g. Super Mario World) and got a high score. You then took the speaker from the cartridge and, having dialed a phone number, held the speaker to it and it told the computer on the other end of the phone your score via different tones.

All the game scores were then put into a national league and the highest score won a prize. You could check the scores on Teletext.

However for me, it never worked. I have a vivid memory of trying to transmit my SMW score through the phone line and it never getting understood.

So my question is did it ever work? There were score on Teletext but they may have been placeholders.

There is not much information on the internet, surprisingly.

(P.S. Which tags do we use for 'peripherals' on here?)

EDIT: @Mazura's cited source is interesting because it talks as if the device wasn't released, however I can tell you that I did purchase one from an independent store and the phoneline was active. I had the telephone at full stretch up the stairs and the SNES at full stretch from my bedroom to ensure the large plastic round speaker could reach the mouthpiece of the phone. You could adjust the speaker so that the tone noises it made were held for a longer duration... it still didn't work.

I can remember Digitiser had some scores on one of their pages, but I think these were placeholders as they never changed.

EDIT: This guy on the PA forums says pretty much the same thing as the accepted answer and got a boardgame as compensation for the recall. http://forums.penny-arcade.com/discussion/57233/hyperscore-an-ancient-snes-thing-queries 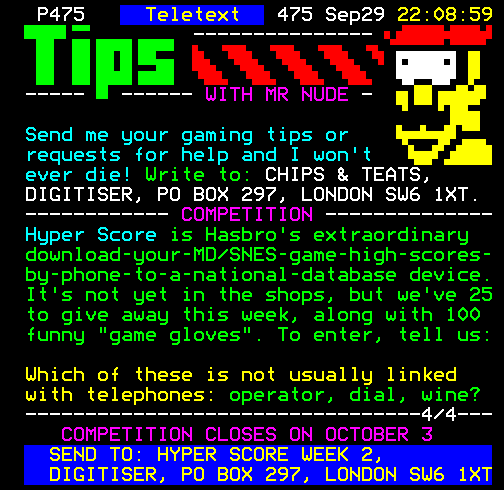 The peripheral was intended for release in October 1995 for £29.99, but was cancelled. –segaretro.org/Hyperscore

This explains how you had one and why they don't work. I'd bet the independent seller wasn't supposed to be 'selling' you one. It would seem that marketing was way ahead of the rest of the team on this.

News: The Hyper Score helps SNES and Mega Drive owners save their high scores, and Earthworm Jim gets his very own Saturday morning cartoon show

Not the answer you're looking for? Browse other questions tagged snes sega-genesis gaming-accessories or ask your own question.

10
Does the 4-gem piece in Columns 3 actually exist?
1
How do I split a weapon in Final Fantasy 2 (aka Final Fantasy IV) for SNES?
2
Is it possible to prolong the life of a cartridge battery?
0
Will an SNES (US) work in Europe (Romania) or do I a need PAL version?
2
Will a Sega Genesis cartridge work on the 32X
6
Will US Genesis or Sega Saturn controllers work with my EU Mega Drive?
4
How to activate the multiplayer feature with the multitap in EA's NHL series on SNES?
2
Did Donkey Kong Country for the SNES use any kind of special hardware in the cartridge?