A friend of mine is level 1 and he already had this diagram. Some thing tells me my game is bugged or I never received the Swallow potion in the beginning.

I'm also missing the Full Moon, I have the enhanced version but not the normal one. I succeeded in having an enhanced cat potion.

The Wikia states that the Swallow potion recipe is given to you in the Prologue.

Geralt receives this potion from Vesemir in the Prologue during the Defending Kaer Morhen quest.

So you should already have the Swallow recipe available, but you'll need to craft it using the correct ingredients.

Here's what you need:

Drowner brain (1): This ingredient can be found by killing Drowners, which are blue humanoid sea monsters that are usually be found near water. Common locations in White Orchard include the southern shoreline near the ransacked village, the swamp lands to the south of the Nilfgaardian garrison, and along the shoreline to the left of the Ford signpost.

Dwarven Spirit (1): This alcohol can usually be found in Smuggler caches and treasure chests or bought from any White Orchard merchant for 47 coins.

Celandine (5): This herb is super common and can be easily found in the environment. An easy place to find them is outside the herbalist's cottage. They can also be bought from the herbalist for 5 coins each. 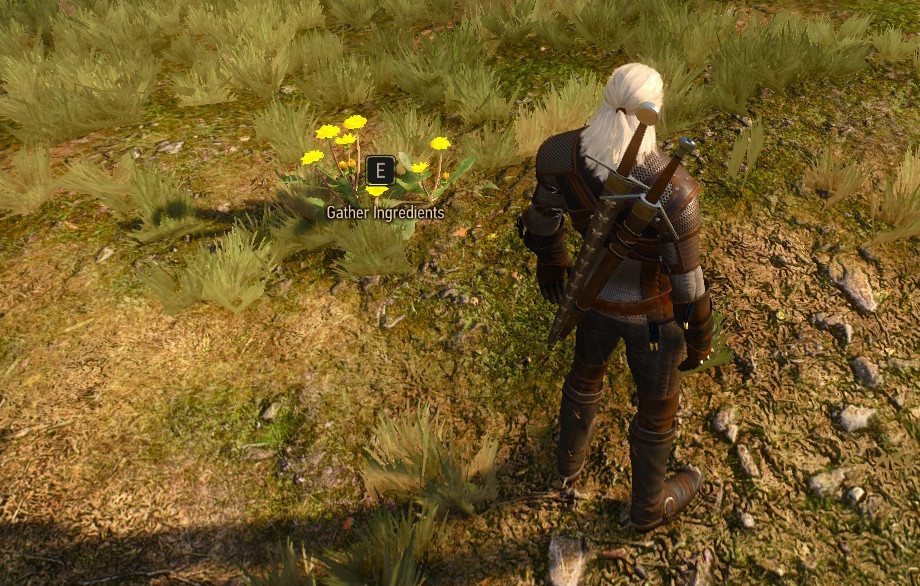 It might also be worth updating your game, as v1.04 patch has been released.

The wiki entry about receiving the potion from Vesemir refers to the original The Witcher game; it serves as the tutorial for potion brewing. In The Witcher 3, the Thunderbolt potion fulfills this role instead.

If you do not have to Swallow potion at the beginning of the game (I can't recall), it will definitely be added to your alchemy list when you begin the quest On Deaths's Bed, which you come across in the course of the overarching Prologue quest, The Beast of White Orchard. It is triggered by talking to the Herbalist about her patient, and selecting the "Maybe I can help" dialogue option.

I've found this page where it says "A list of all the potions you are able to craft in the beginning of the game" (just Ctrl+F for "swallow").

A number of other pages just say that you can craft the potion, they never mention anything about getting the formula. My guess is that you start the game with it, just like in The Witcher 2 (you received it from Vesemir in the first game, and the second and the third games are sequels to that first game, so it makes sense that you already have the formula when you start them). Are you sure you didn't sell it by mistake?

Not the answer you're looking for? Browse other questions tagged the-witcher-3 .

16
How do I get the Swallow potion in Witcher 3?

4
Where can I find Vitriol?
1
Missing oils and potions
16
How do I get the Swallow potion in Witcher 3?
4
What can I do? - Beating Wandering In The Dark
2
"NO REBIS AVAILABLE TO USE" even with Rebis in inventory