Can it do harm to turn off Wii-U with orange light?

I have my Wii U connected with a power strip with a switch. That switch is always off, except when I want to play a game, obviously. When I stop playing, the Wii U is updating most of the time (orange light). Can I harm my console by hitting the switch and thus removing power? Or is it recommended to wait for the light to turn red?

For clarification, I mean this little light (not my picture): 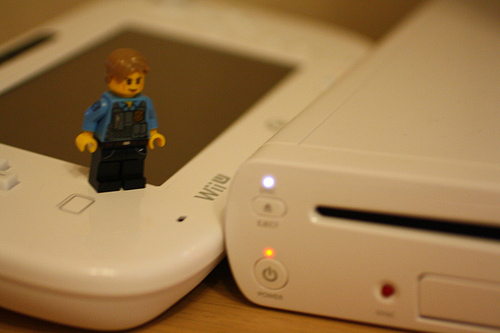 It would appear that some users have in the past reported issues when the power has been lost to the console for some large firmware updates, Shutting Off Wii U During Massive Update Bricks Console

The reason your Wii U sometimes has an orange light is because it's downloaded an update/patch/demo/game for you to use/play next time you get back on it, for example Nintendo has made it so it automatically downloaded Wii Sports Club into every Wii U.

It (by default) checks for internet connectivity once every 6 hours, and if there are updates, will download them.

It also states on that page that you can turn off standby updates in your settings therefore if you are worried about possible damage why not turn off the standby updates as then when you power off your console using the button on the console any downloads will stop and you can safely turn off the power strip.

Obviously if you have allowed an update which warns you not to turn off the console until the update has finished then you will need to leave the console powered up.

5
Xbox 360 power supply has red light at start of day
5
Does Wii U tablet work with wii games?
2
Can you buy Wii U downloadable titles without a Wii U?
4
Do Wii U PAL consoles from Asia work with Wii U PAL games from Europe
2
Can a Wii U work with a hardware RAID for external HDDs?
2
Can screen rumbling/shaking be turned off in Smash Bros Wii U?
4
Can Bluetooth headphones work with Wii U?
13
How can I connect a Wii U to my router with an Ethernet cable?
0
How do I turn off a Wiimote on the Wii U?