Will monsters spawn on top of trees?

I'm covering everywhere near my house with my torches and building walls (using fences or blocks) around them, to make sure no creepers blow me up as I come out, or trample my sugar cane and wood. (I have now completed about 80% — without using any mods, tools, or other cheats.) 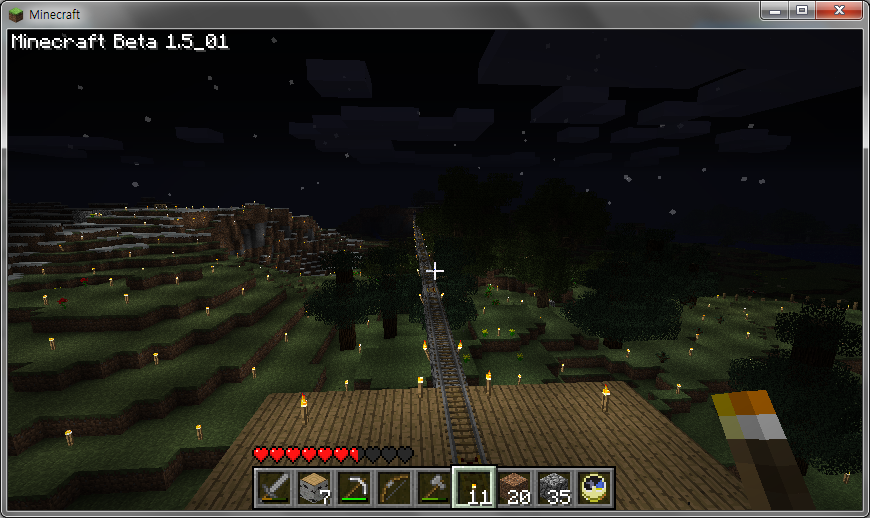 However, as you can see, the tops of some trees are too dark. So I'm worried about monsters spawning on the top of trees. There's some mention about leaves and mobs in Minecraft Wiki:

...and they never spawn on Glass, Ice, Stone Slabs, or other see-through or non-cube blocks.

(I'm playing Minecraft in fancy mode.) Even if monsters can't spawn on the leaves, maybe some monster can spawn on the wood that's not covered by leaves.

Can monsters exist near my house?

The distance between my torches is 5 metres.

Update: According to Notch's blog post about changes coming in 1.6, the torches-on-fast-leaves bug is getting fixed:

This means that monsters can no longer spawn on leaves, either, as they are always considered transparent, even when using Fast graphics.

Monsters can spawn on any solid, non-transparent block which is at light level 7 or lower.

Signs, torches, rails, and the like are ignored when spawning monsters; they'll spawn on the block underneath just fine. This is why one-block-wide railways need to be lit.

Transparency means whether or not light passes through a block rather than whether you can see through it. Half-blocks, doors, stairs, and glass all count as transparent and prevent monster spawning. Leaves, oddly, count as transparent only when Fancy graphics are enabled. An easy way to test a block for transparency is to try placing a torch or sign on it — neither can be placed on transparent blocks. (Meaning that torches can be placed on leaves with Fast graphics, but not with Fancy.)

Torches put out light level 14, so monsters can't spawn within 5 blocks of a torch orthogonally or 3 blocks diagonally. If you put your torches in a diamond pattern, they can be up to 9 blocks apart, but it's best to move them closer than that on uneven terrain. (I use 5 myself.)

If you like, you can actually torch your treetops by changing your graphics to Fast, placing the torches, and switching back. Your torches will stay rooted, even though you wouldn't normally be able to place them that way. Personally, I think it makes them look rather cheerful. :-) 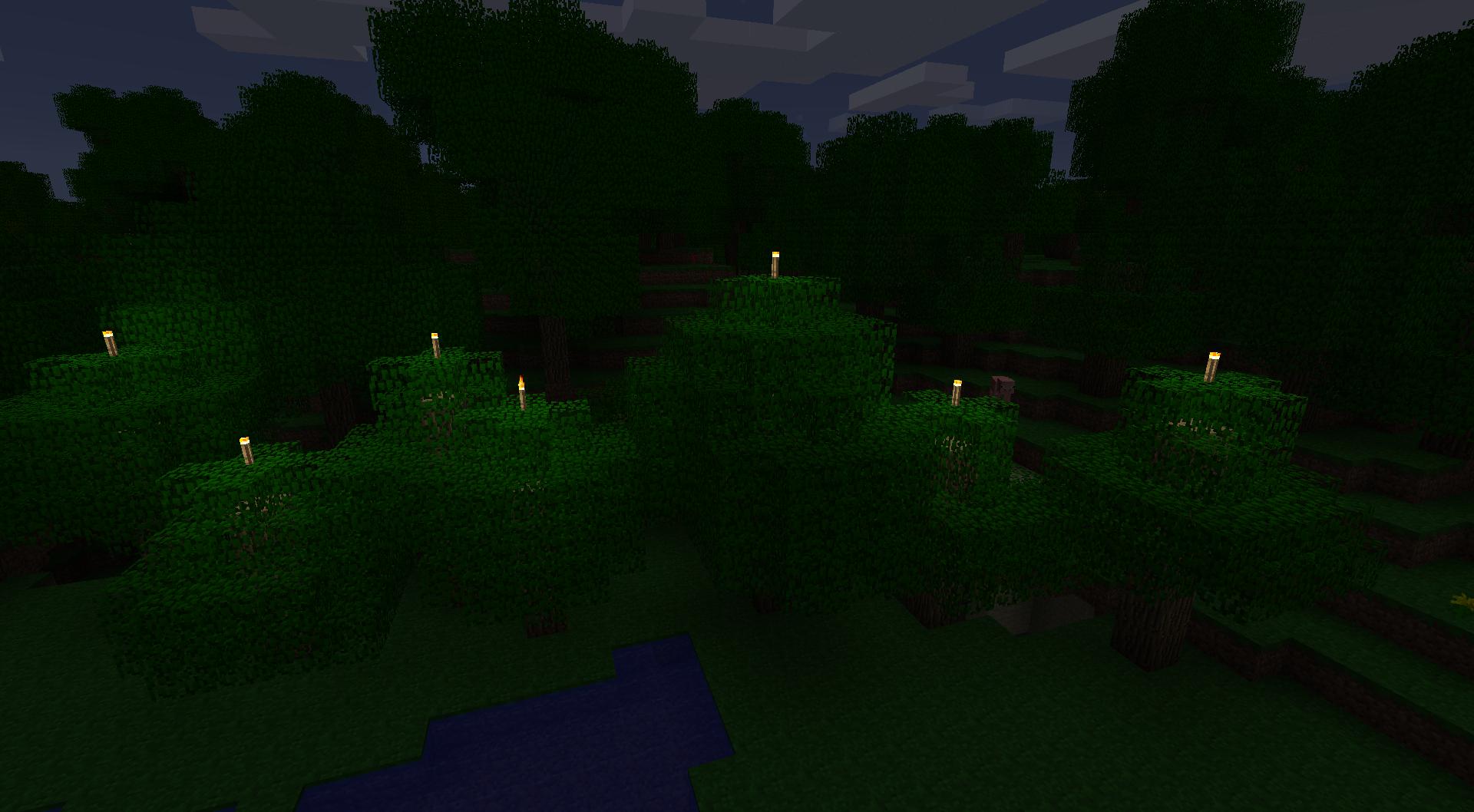 I created a test world in MCEdit consisting of 40x40 chunks (640x640 blocks) and filled it with a layer of leaves.

I then loaded the world into Minecraft 1.8.1, set the difficulty to Normal and the graphics to Fancy, and waited until nightfall: 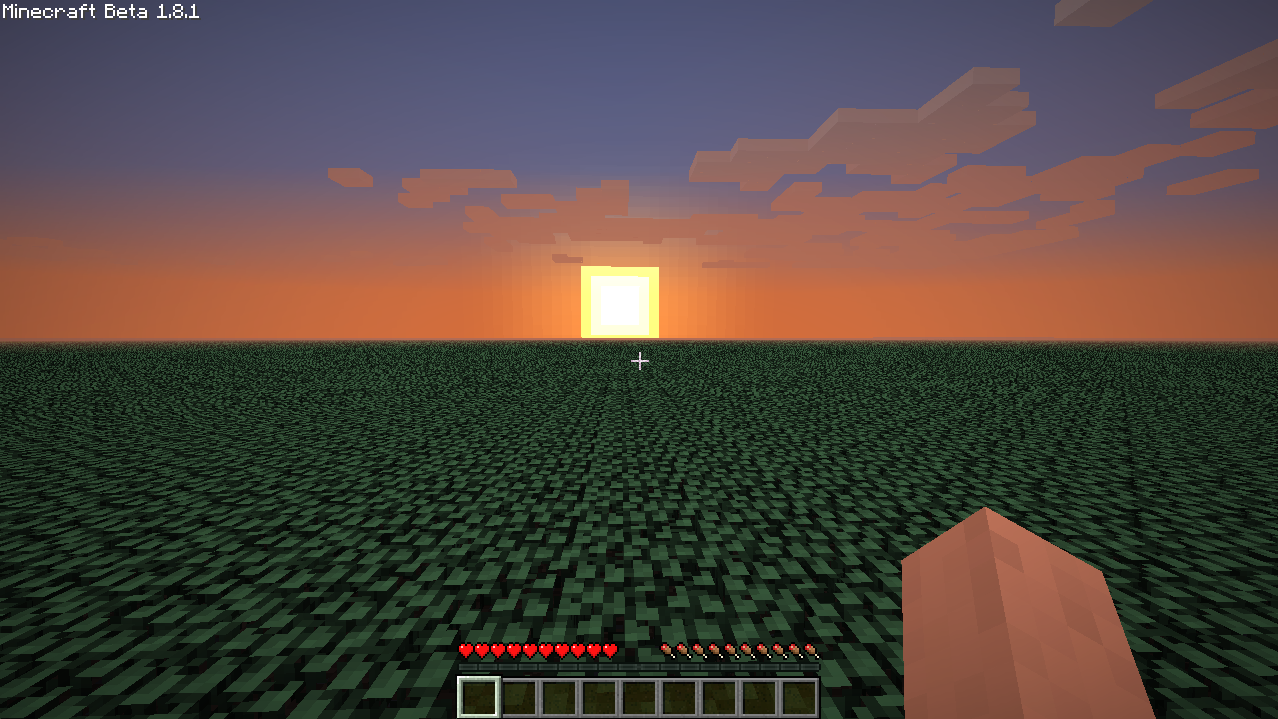 Once nightfall hit, I found no mobs anywhere: 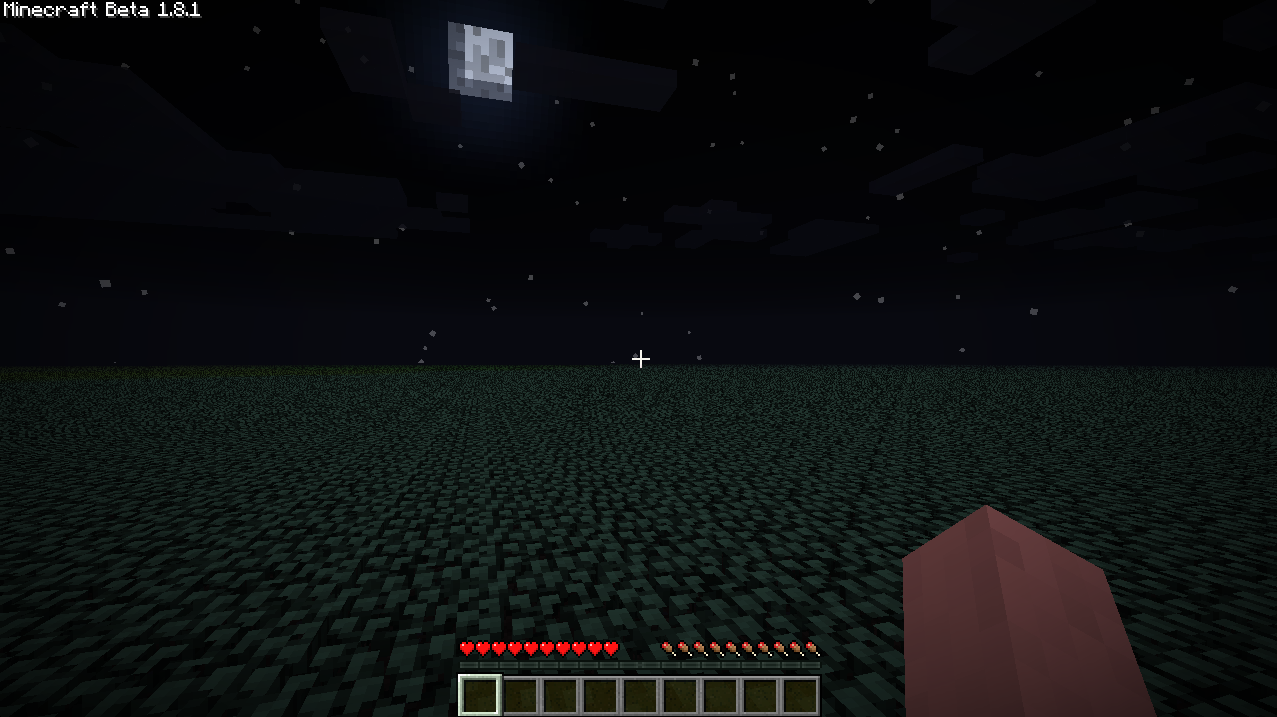 This corresponds to what the old behavior was. However, when I switched over to Fast graphics, I found nothing as well: 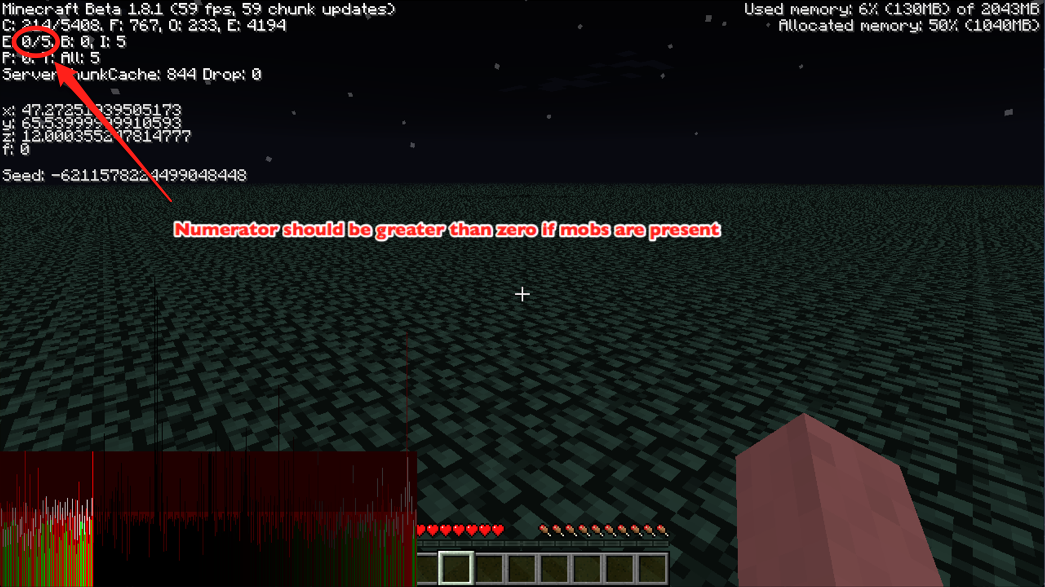 So I decided to dig a hole to act as a control: 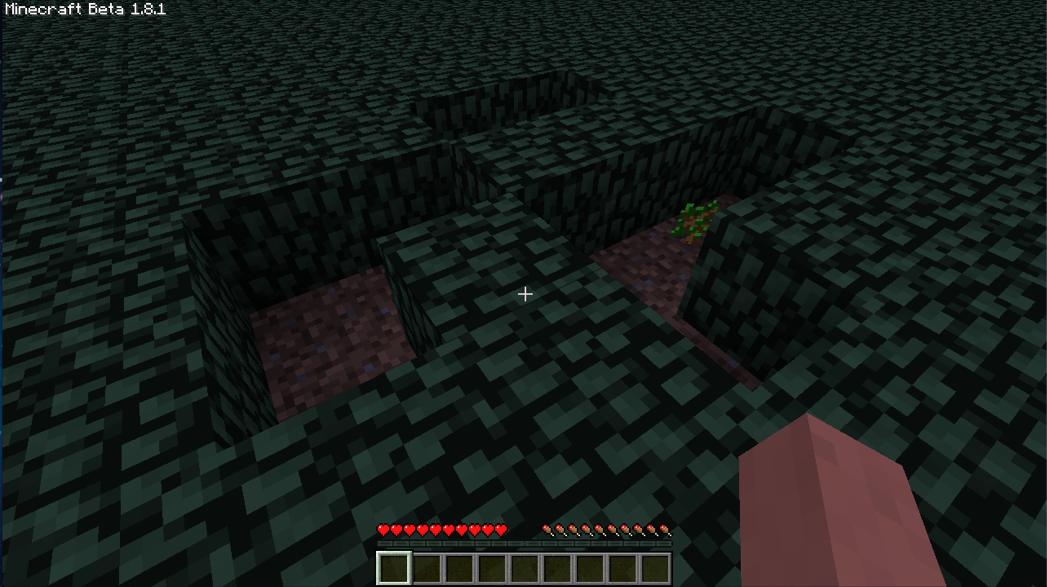 And sure enough, the mobs started spawning once I moved 24 blocks away: 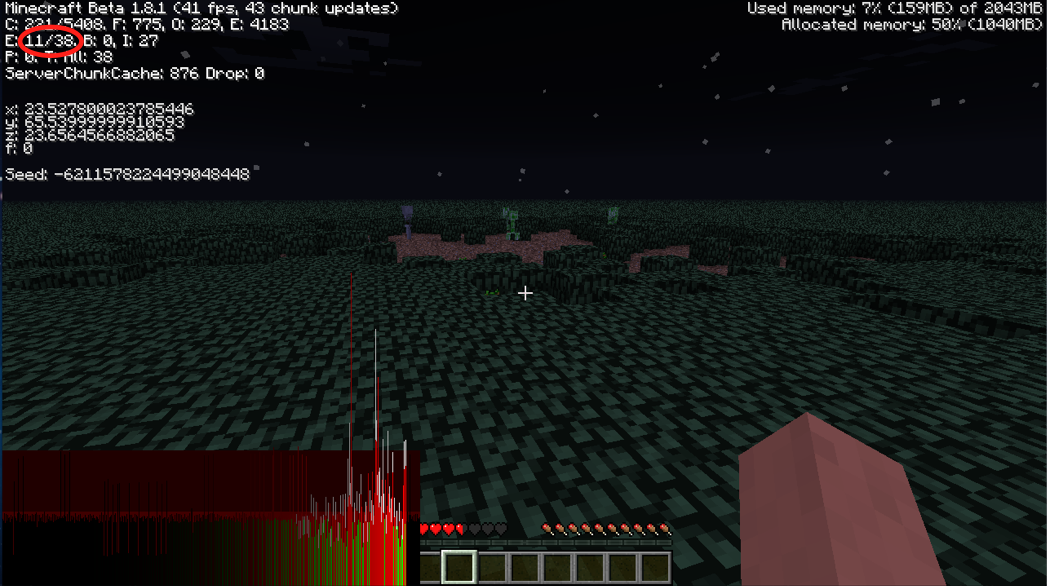 My, that's a very nice test world you have there. It'd be a shame if someone were to...blow it up. Again, this is still on Fast graphics. For good measure, I looked away from the mob hole, and again, found zero mobs spawning: 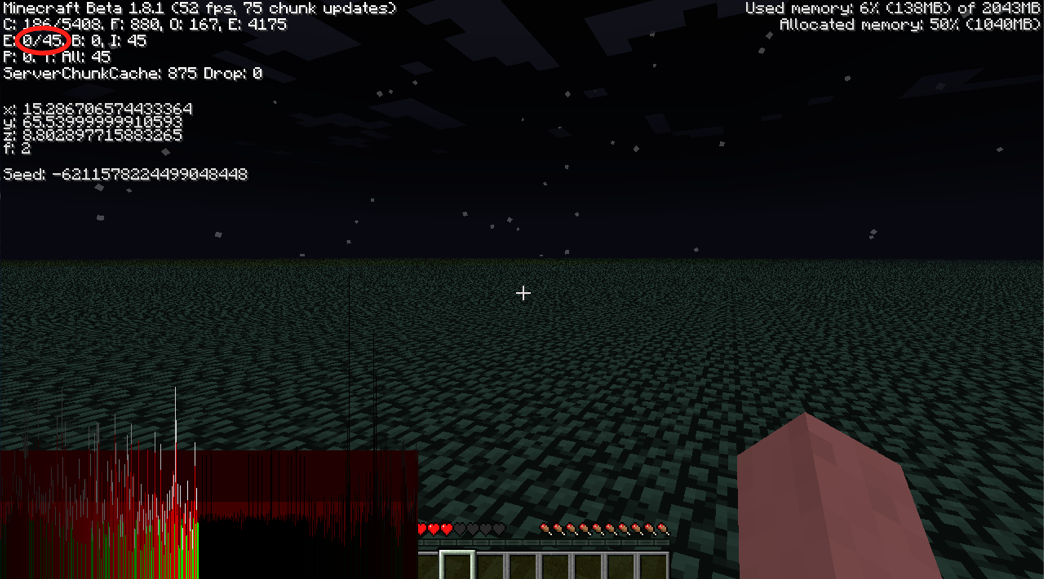 So in conclusion, no, hostile mobs cannot spawn on leaves—regardless of your graphics settings—in Minecraft Beta 1.8.1.

Monsters cannot spawn on top of leaves. It says in the official handbook that they can only spawn on solid blocks, not transparent blocks or slabs. You do not have to worry about mobs spawning on top of trees. Since leaves are cheaper than glass, you can easily mob proof large areas with leaves for not much price. But torches would still be cheaper. Slimes can spawn in lit areas, so if you want to slime proof an area use leaves. You are asking if mobs will exist near your house, they cannot spawn there, but they can spawn somewhere else and walk there.

8
Can hostile mobs spawn on leaves in Minecraft Beta 1.8 or higher?
41
What's the difference between the Fancy and Fast settings in Minecraft?

32
How can I improve framerate of Minecraft client?
5
How can I get rid of rubber trees in Redpower?
3
Why do turtles and snakes love my marble brick house?
3
Why don't spawn chunks work properly with OptiFine?
0
Will this spawn slimes?
3
Minecraft - Guardian farm low spawn rates
6
How can I make a player spawn into a building in The End?