Which biomes do Snow Golems leave trails in?

Snow golems are entities in Minecraft that can be created with 2 snow blocks and a pumpkin.

They leave a snow trail behind them, but only in certain biomes, according to the wiki. However, the definition of which biomes this happens in is a bit vague since two entirely different sets of biomes are mentioned.

So my question is, in which biomes do snow golems leave snow trails?

SCIENCE! and/or code is appreciated, but not necessary.

Biomes in Minecraft are split up into the categories of snow-covered, cold, medium or warm. This is used for separating biomes into clusters, to minimize the chance of seeing Ice Mountains right next to a Desert. As Oceans are used as the gap between these clusters, they are the only biomes not categorized.

My initial hypothesis was that the trail can form in cold and snow-covered biomes, but not in medium biomes, and that snowmen would die in warm biomes.

I used MCEdit to set columns to all of biomes and their major variations. For example, I did Birch, Roofed and Flower Forests along with the normal Forest, but not the more insignificant biome variations like Jungle Edge M.

I also recorded whether or not the snowman died, as it was easy to do after the setup. The results I obtained are shown in the table below: 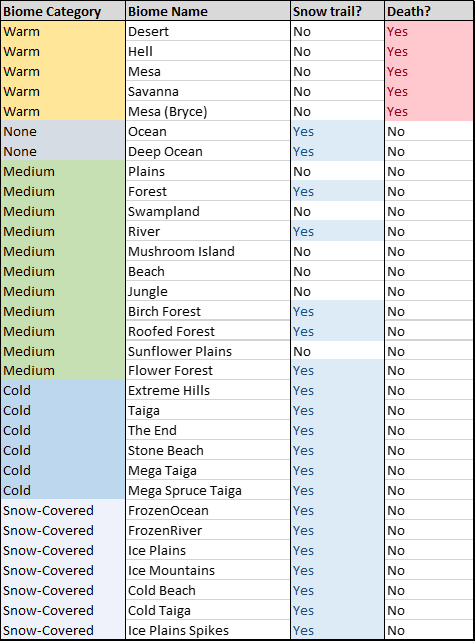 The warm biomes were the only ones to kill the snowman, and all of them did so. All of the cold, unclassified, and snow-covered biomes allowed a snow trail.

The medium biomes are were it's not so clear cut, though. In general, it seems to be that forests and rivers allow snow trails, but not plains, jungles or beaches.

19
Can water freeze and snow fall in biomes in Minecraft?
15
When do Snow Golems despawn in Minecraft?
8
Is there any way of making a snow golem survive in hot biomes?
6
How to prevent snow steps from Snow Golems?
4
Do Snow Golems die in the rain?
8
Can the Enderdragon be killed by Snow Golems
7
How the snow/ice patches in mountain biomes are calculated?