What's the capital A on the right of the input box?

This thing. I have no clue what it is.

It shows the configuration of your keyboard, allowing to change between alphabets, for example from latin to cyrillic or korean.

It is used for players discussing in different languages and needing different keyboard configurations.

EDIT: So I tested a bit around.

I installed the russian and english keyboard layouts on my Windows system and checked that I could switch from my french layout "FR" to russian "RU" or english "EN" by pressing ALT+SHIFT.

I then launched Starcraft 2. I can confirm that the "A" means latin characters and RU means cyrillic characters. English and French layouts both show an 'A' because both use the latin alphabet. 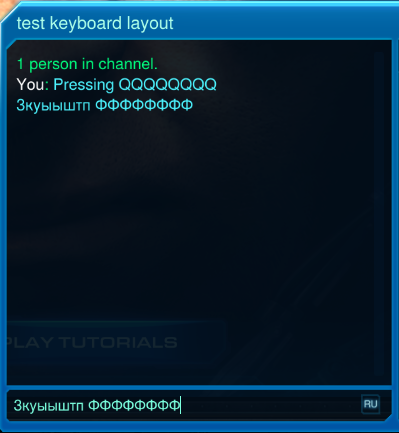 This sign indicates selected language. For me there are 'En' and 'Ru' states of this icon.

6
What's the point of the character code?
7
How do you 'read' your opponents building choices?
33
What is the "magic box" in Starcraft 2?
4
What are all the different *titles* for finishing the campaign?
5
How to get rid of "Input limit reached. [...]" warning
2
What's a "Stank" and how do I find one?
7
What is the purpose of Dehaka's right arm?
21
What's this number on my friend's Battle.net Portrait?
1
Scouting 2 Rax & early gas in TvT on a 2p map - what are the possibilities?
3
Where can I find Stacraft 2 installation story ingame?