I have a problem with my server. I own a server with Spigot 1.8.3, Multiverse (idk the version) and PlotMe. (Essentials RELOADED vTeamCity) I'm using McMyAdmin. I get chunks error. Sometimes, chunks aren't generating and I need to disconnect/reconnect or restart the server to fix the problem. I got a "freezed" chunk in the spawn. Pressure plates aren't working (/clone and /fill are working). When I spawn mobs, they are frozen.

Here is a screenshot of the issue: 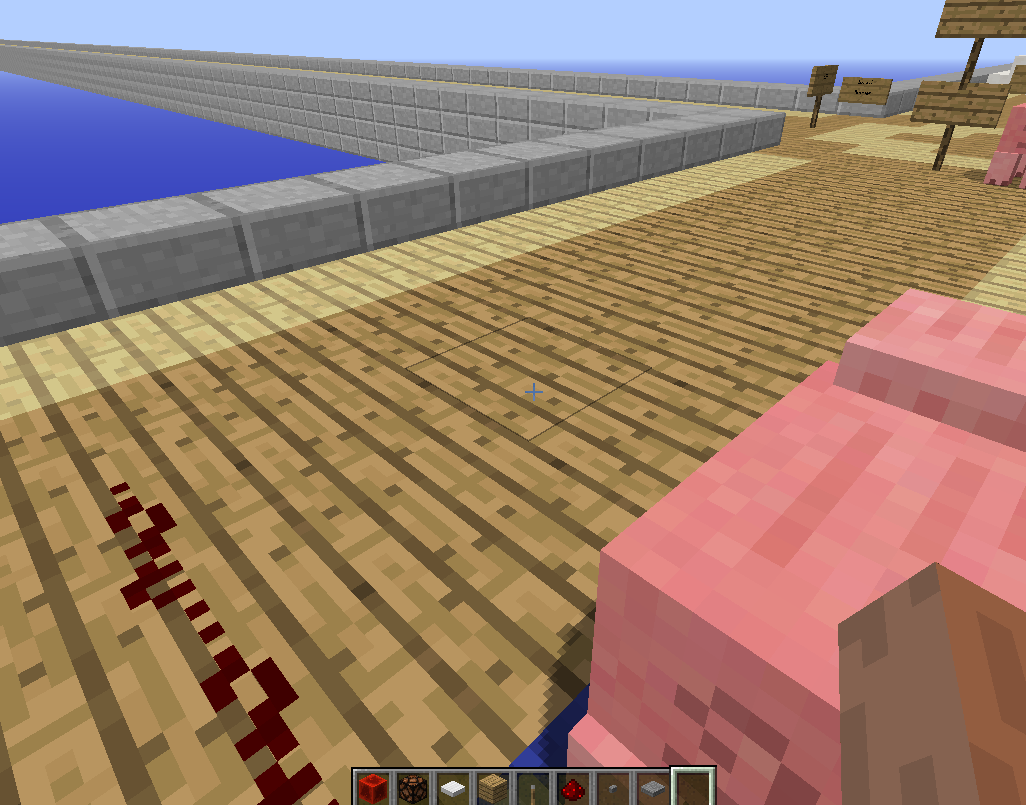 I am trying to repair chunks ("it says no chunk error") In MCEDIT, the chunk is showing. I can place or break blocks. Levers and buttons are working.

sorry for bad english, im french EDIT : I'm playing on Minecraft 1.8.1. With 1.8 and optifine it's working great. This is a client issue

There are certain ways you can attempt to fix a chunk error:

It could be that your TPS is set low. TPS is much like FPS but for the server. It cannot go above 20, and it should stay at 20. TPS stands for Ticks Per Second. This applies to singleplayer, as it runs a sort of local server when you load one, this is to allow opening to LAN.

Common symptoms of low TPS include the sky jumping back a little bit every second making it look laggy and extending length of day/night cycle, mobs/entities (not including players) moving unusually slowly, all entities that can take damage take it much more slowly with delay, all entities effected by gravity falling slowly in choppy little bits, players seemingly teleporting around in multiplayer (purely visual), blocks difficult to place/destroy (multiplayer and in extreme cases in singleplayer), etc.

Check your game's Ticks Per Second by typing /gamerule randomTickSpeed If the speed is set to larger then 3 then we may have found your problem. Set it back to 3 if it is set higher.

With a little research I think WorldBoarder may solve your problem it allows you to fully generate (fill) your world all the way to the border, filling in any missing chunks, including a configurable buffer zone just outside your border.

With a little help you can also make another possibility possible. If you were to create another account and keep that account in the needed chunks then it is possible that the chunks won't unload keeping them fully functional. I Found a great video that could go hand in hand with this idea: Super Chunk loader

You could also use the commonly talked about hopper chunk loader which may keep the chunk loaded all the time. Hopper Chunk loader As an edit to your comment on how loadding your whole map would be an inconvenience, I found another Chunk loader that can be set to load only one chunk: Here is the link: Minecraft 1.8.8 Remote Chunk Loader Explained

It is possible and could be likely that you have a corrupted chunk even if it says you don't. There are different types of corrupted chunks, but there are ways to patch, fix, and delete depending on the problem. This would require MCedit to fix. I would suggest copying this part of your world with commands or Woldedit before you try this, if you still can. If you close your server for a bit and load it up in single player, you can attempt to patch it using this method: Corrupted chunk fix for single player You may need a similar fix like this, but not this one, so this will only get you to the starting line and help in your search.

As a final thing I found a mod that may do what you want. It is called CodeChickenCore. In this mod it has something called ChickenChunks, This is what it should include: This introduces a new block called the “Chunk Loader”, which allows chunks to be loaded in memory at all times. It is very convenient to use as it comes with a special GUI for configuring chunk loading. Chunks are also free to load.

For the ones they got the problem. If you are using Multiverse, just unload/reload the world, it can fix your problem (IT CAN, MAYBE WORKING MAYBE NOT)

With MCEdit, try the chunk repair too or play the map in single player for check if it's your map of the server.

You use 1.8.1 and probably Spigot to run those plugins you mentioned.

Spigot is known as kind of unstable project with a lot of bugged versions. You might have one of those, because I seen similar problems with people using it (especially not working AI of mobs etc)

However as Spigot is unstable, it also has constant development, so a lot of bugs were fixed already.

You should update your server to latest 1.8 version, like 1.8.8 or 1.8.9, with possibly latest server version as well. You will be able to connect with same 1.8.1 version client, however I would use at least higher version than 1.8.3 (bugs with special characters etc). AFAIK the version 1.8.9 is stable with Forge and OptiFine so you can use this version for client as well.

(I doubt it that it is pure client problem, however if it is, then you should do the same - update the client to latest 1.8 version.)

For doing so all you need to alter is the main server.jar file (do it when server is stopped!), nothing else is needed to alter and should be fine.