I just got 0 stars in a clan war attack because the clan castle was too deep inside the enemy base. I tried sending a giant to lure them out but it got stuck at the wall. I deployed a bunch more giants and they broke through the wall and the cc troops came and I tried to drop a lightening spell on them but they moved too fast.

How do you destroy the cc troops if the cc radius is still within the boundary of the buildings? If you drop 3 lightening spells on the castle while the troops are still inside would it destroy them?

Analyse the base first:

@pnizzle's advice is spot on.

Sometimes the only troop you need is a barbarian, goblin or even a wall breaker. Giant is recommended because it usually lives long enough to lure everything in the castle out, and is a ground troop. Anything in a clan castle will attack a ground unit, but if the CC contains e.g. balloons, a minion crossing into the castle radius will NOT draw out the CC contents. Only troops that are able to attack air troops respond to an air troop. 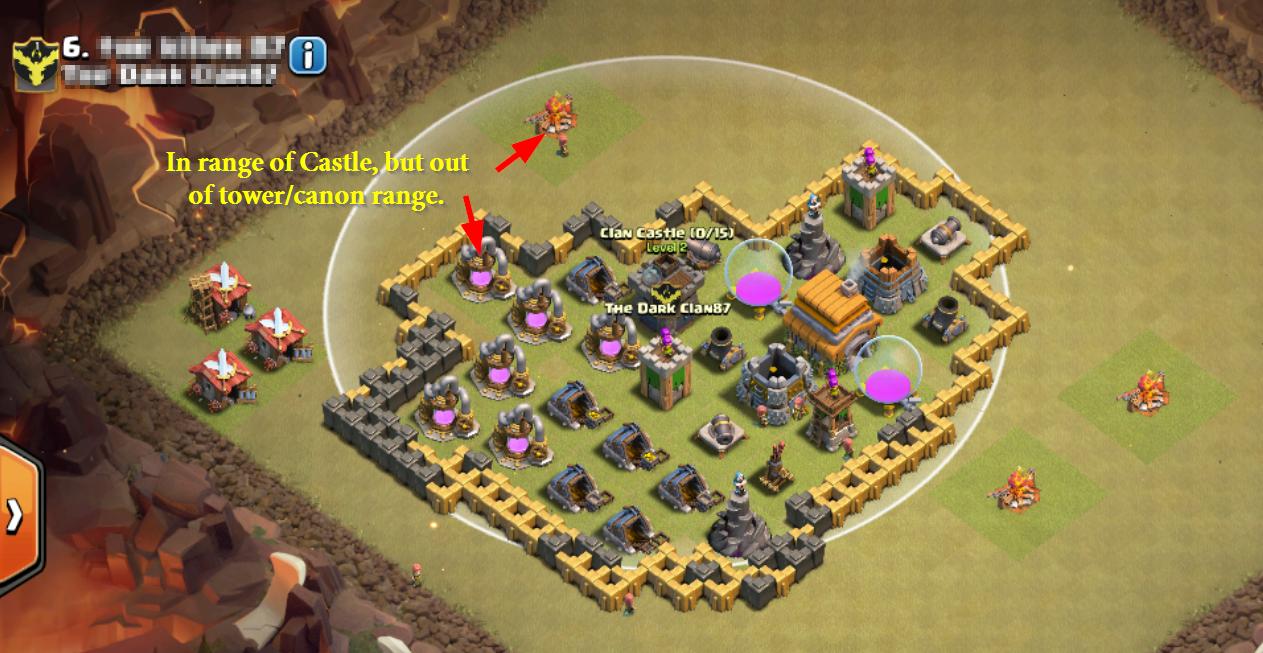 You seem to be at least TH7 or this shouldn't be a problem for you.

Attack the side the clan castle is closest too. If the person is farming, surround the entire base with your troops. To get at least one star, snipe the town hall if possible. If possible, reserve some troops and clan castle troops to deal with the enemy troops. Rage spells should be kept until the troops are drawn out, and when your own troops realize there are enemy troops, use a rage spell to help your troops finish them off easily. Be wary of powerful troops like balloons and dragons though.

Hogs might be good, they do cost some dark elixir though. Hogs can jump over walls and reach where the other troops cannot. Really, the best way is to charge in with most of your troops and rage them up while fighting enemy troops. Most people in Legend or Champion leagues do this method. Otherwise, place one troop and draw them out then massacre them with poison spells and your other troops.

Use 1 Hog rider(send him close to cc as possible) to lure CC it works great! and u can use balloon if u don't have Hog Rider unlocked.

4
In clash of clans how do you tell if enemy troops can be deployed in certain area?
4
What are the most effective attack compositions to focus on general?
1
Running out of time in attacks
3
Luring CC troops out with dragon attack i.e. only have 200 housing space for troops
1
Troops not attacking Clan Castle troops
7
Where did my clan go?
6
Protecting cc troops from poison spell
2
Ice wizard attacking defending clan castle troops
6
When is it not a good idea to lure out clan castle troops?