I'm having trouble killing Letho near the end of the first chapter. How do I do it?

The following is somewhat of a spoiler, to avoid it being shown in the question excerpt, I'm filling the space with useless boilerplate.

I'm near the end of the first chapter and I'm now facing Letho, the kingslayer and witcher. And I'm getting my ass kicked thoroughly and completely. I haven't even been able to hurt Letho in the short time I'm staying alive.

He shields himself with Quen and just blocks every single attack I make. Then he blasts me with Aard, throws a poison grenade at me, or incinerates me with Igni. I really haven't been able to make any dent into his health bar, he just blocks every attack. And I can't keep up Quen as fast as he damages me.

Any tips on how to kill that bastard? I'm not kidding when I say that I see no way of surviving that fight at the moment. 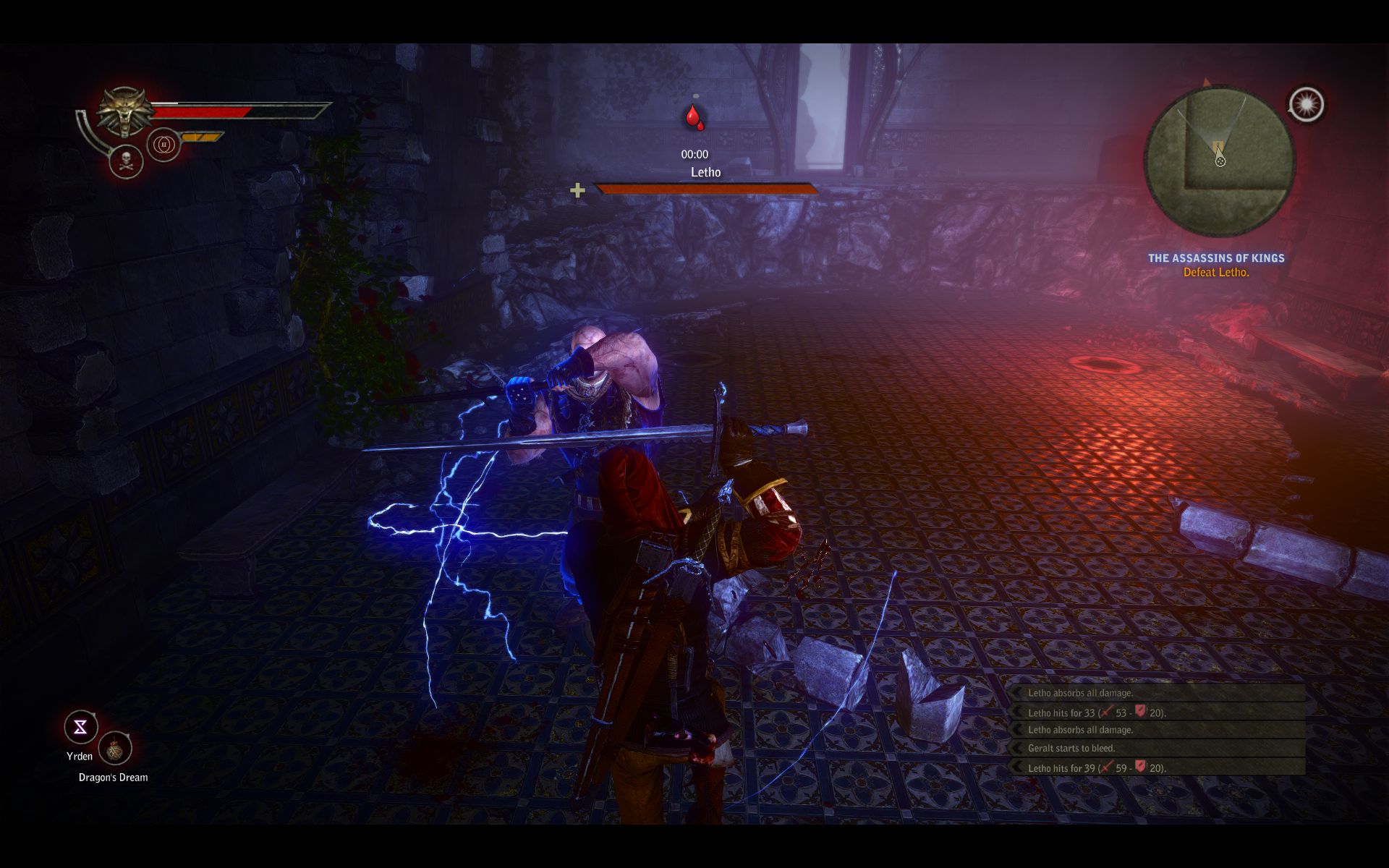 Push Letho away with Aard, immediately follow that with strong or fast attacks for approximately 2-3 hits, repeat the process until you run out of Vigor; when that happens, run away. If Letho puts Quen up, set a Yrden in front of you to tear it away and buy you some breathing room. Don't attack Letho up close unless you're absolutely sure you want to, and make sure you parry and attack only when he isn't. If you can stun him by parrying, excellent, but only parry when you're just about to be hit by one of his blows. Also, make sure you're using the Steel sword, as it's more effective against humans. You can also set up a few traps quickly if you wish, and ALWAYS dodge to the right just before the battle begins, so Geralt can shift away from Letho's Aard if that's his first move.

The fight with Letho in Chapter 1 is challenging any way you slice it, but there are a few tips I can give to at least beat him on Normal difficulty. First off, keep your distance from Letho and dodge his beefed up Igni and Aard signs as well as the various bombs he tosses at you. He will frequently use his Quen sign to shield himself, and it is no use attacking him while it is up. Thankfully the Yrden sign works extremely well; while keeping your distance, drop a Yrden in the center of the fighting area. It will usually take 2 Yrden to break through Letho's Quen and after the second Yrden, Letho will be open to attack. Quickly move in and go all out with heavy strikes (you should at least get in about 4-5 hits before your Yrden wears off).

Once Letho is free, you will probably want to back off. Letho will A) cast Quen, in which case you'll want to simply repeat the previous strategy, B) cast Aard, which does a moderate amount of damage or C) attempt to attack with his sword, which can be blocked with a follow up quick strike or two for a small bit of extra damage. Sometimes Letho will shrug off Yrden if he is unshielded by his Quen. Throwing daggers (especially with 2 points in Dagger Throwing) come in handy for most fights in general, this one is no exception. Grapeshot bombs and traps can also be effective to get some extra damage in after your Yrden wears off.

I know its been said but use Aard to push him, try to stop him from using his Quen shield. Don't bother shielding yourself, he will simply smash through it. If he does get a Quen off distance yourself and pull it off with a few Aard attacks, make sure to dodge his spells and bombs. His primary sources of damage are fire, bleeding, and poison so try drinking a Golden Oriole potion before you begin (or load a previous save). A vitality regen potion added on to all this made the fight a breeze.

It was easy for me, I killed him with 5 samium bombs, 5 well balanced daggers and 7 robust well balanced daggers. Just keep throwing, he won't have time to strike back and run and dodge his attacks when hes got his Quen shield up. I killed him withouth any potions or oils. Also, I had a jagged blade, which I needed to strike him with about 5 times.

And if everything really goes to hell and you can't be bothered to keep trying.. Reducing the difficulty to easy means he won't be able to parry when you combo, meaning you can essentially kill him in 30 seconds just by spamming fast attack. I wouldn't advice it to people who want a challenge, but it helped me dump some of my frustrations ;)

Not a very exciting solution that I used, but a solution none the less:

He wont have time to cast Quen as he is stunned in between each bomb hitting him. It might not look like you are doing much damage but remember you should have about 20 to use,

I found that the most important part was to never attack Letho from the front. He seems to be able to block any attack, even when using Yrden or Aard to disable him for a short time. Yrden is very effective against him, as Bora suggested. Just trap him and then roll behind him and hit him hard.

His most dangerous attack is Igni, as it can ignite you. I tried the Golden Oriole potion to help with that, but that was not enough to protect reliably from being ignited. Quen helps against that, but you can't keep it up all the time because you need to let your vigor regenerate in order to be able to cast Yrden to trap Letho.

I applied some potions and sword oils and also made as many bombs as possible and also equipped the well balanced dagger. Best advice is to run and dodge his bombs and signs and, at the same time, use yarden to reduce his quen, this can take up to 3 times on hard.

First off, I played through on medium difficulty.

Letho is tough but like most boss fights he has patterns of attack that you can exploit. These patterns are roughly based on how close you are to him.

If you're in close, his sword attacks are pretty brutal and are difficult to block (but read on for usage of Aard).

If you're in mid range he'll use Igni (fireball) and Aard (to push you back off your feet).

If at long range, he'll use Grapeshots (grenades) and their poisionous variant in combination with his mid range attacks.

He'll always try to close the distance between you.

Regardless of distance though, he uses Quen (the magical shield) a lot. When he has Quen up, keep your distance from him, while dodging his ranged attacks. Don't be tempted to attack him - it takes 2-3 hits to remove it and by then he's probably already hit you. It's easy to avoid the Grapeshots as you familiarise yourself with his body motions as he thows them and they move relatively slowly through the air, Igni and Aard are more difficult to dodge but as long as you keep moving you should be alright.

I beat him using a fairly simple combination of keeping my distance, keep moving, then close in and use Aard on him when his Quen drops to push him off guard then move in for two heavy attacks then run away. As you advance towards him - as you're about to cast Aard (only when his Quen is down) - do so in a diagonal manner - strafe forward and across from his path, don't go head on at him becuase he'll often hit you with Igni or Aard.

You can get two heavy attacks in when you've knocked him off guard, the third, on all my attempts is blocked so I'd say stick to two, rinse and repeat. I didn't bother with the quick attack, I'd say you could probably get three of those in though.

He sometimes goes into weird frenzies attacking thin air, advancing in a stright line, I'm not sure if this is related to how well you're beating him - desparation maybe? Anyway, when he does this, flank him (close in to the left or right of his attack path) get close and use Aard to interrupt his attack and throw him of balance then get two hits in and run away.

I experimented with Yrden to tear his Quen away but in actual fact just avoiding him altogether worked better for me and gave my vigor a chance to replenish.

Once you've had a chance to master the Aard, hit, hit attack pattern, you can finish him off pretty quickly.

I killed him easily with 10 or 20 Grapeshots. Just throw them at him, he won't stand a chance.

Not the answer you're looking for? Browse other questions tagged the-witcher-2 .

15
How much of The Witcher 2 will I have trouble with, not having played the first game?
11
How do I not get incinerated or cut down on the very first battle?
28
How do I defeat the Kayran in the first chapter of the Witcher 2?
3
How can I register The Witcher 2 and get the Troll Trouble DLC?
4
How do I get to the Catacomb in Chapter 2?
1
The Witcher 2 freezes at the end of chapter 2's cutscene
4
Is Geralt stripped of his weapon after fighting Letho in the Elven ruins near Flotsam?