Why is link not possible over short distance with no apparent link in the way?

Firstly, here's the area I'm working in. Here's a diagram created from the map: 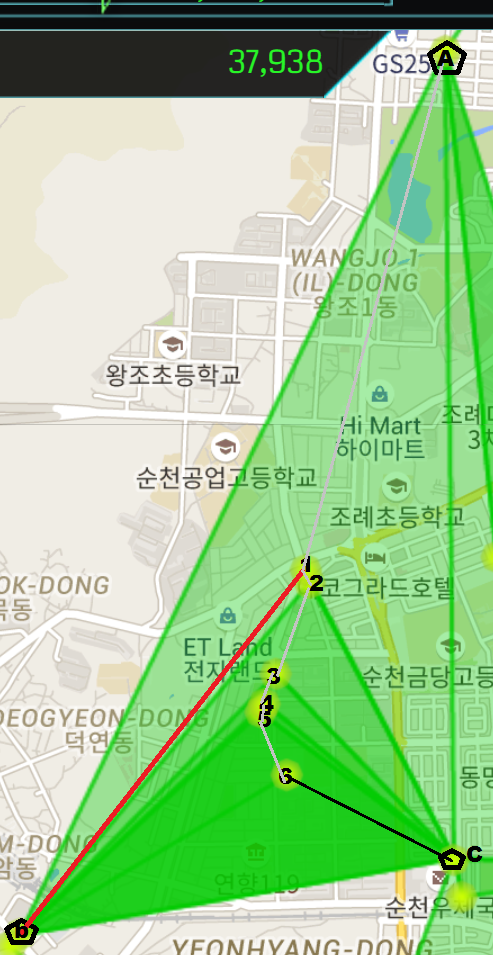 For reference, these are the locations in the diagram: (apologies that it's not in English, that can't be helped)

The outer triangle was an existing one that I didn't create. I took some time planning how to best build links within and eventually settled on the plan in the diagram. I was about 50% successful. I was unable to make some links, but I don't really know why.

My plan was to travel down the numeric spine of the portals to collect keys, go to C first, connect each, then go to B and finish the connections, then travel back up the spine from 6 to 1 connecting each numeric portal. This is based on a similar process as described in this question.

When I arrived at B, I was able to connect each portal until I got to 6, which refused to connect (This is the black line in the image). There is no apparent link in the way. I tried upgrading the resonators and adding a Link Amplifier, but neither worked.

Eventually I walked back up the numbered portals, tried to connect 6 to C from 6, but it still failed (though once the "Link Possible" voice clip played, no actual potential link appeared when I tried). I traveled all the way up to 1, with no links possible between numbered portals (grey line), and was still unable to connect 1 to B.

In each case described, I had portal keys available. I don't see any links blocking the path, and distance shouldn't be an issue. I did notice that it was the last portal that I tried to connect (from B and C) that failed to connect.

What caused these links to not be possible?

There are some rules you have to consider when linking:

I can't see clearly all the links, but I suspect that each of the points had 8 originating links on it (i.e. links going elsewhere) and this is the reason.

There's a hard limit on the number of outgoing links as 8, and maximum total of 12.

Not the answer you're looking for? Browse other questions tagged ingress .

40
What's the fastest way to take over a portal in ingress?
5
In what order should I hack / power up an unclaimed portal?
7
Why can't I link certain portals after creating a field?
4
I've dropped items for friends. Why are they not appearing on the map?
9
Where did my portal key go?