How do I make a setblock or a fill clock?

What are those and how do I make them?

First off, if you are playing in Minecraft 1.9 or later, you don't need to use these clocks. Repeating and chain command blocks have the same functionality (see below) and more, and are much easier to use. Use them instead.

A setblock or fill clock is a command block contraption based on using the /setblock or /fill commands to alternately set redstone blocks and regular blocks in the same spot, therefore activating adjacent command blocks 20 times a second. They are therefore also referred to as "20Hz" clocks.

They are extremely useful for making command block contraptions for multiple reasons:

How do I make them?

Both clocks require two command blocks as a base. One to set the redstone blocks, the other to set the regular block.

A setblock clock is slightly simpler than it's larger cousin. It creates and destroys a single redstone block between the two command blocks.

Place two command blocks in a line, with a single free space in between. Remember what I said about the well-ordered execution earlier? This is based on the (relative) coordinates the command blocks are placed in, so let's find out!

Press F3 to enter the debug screen. If you are playing on 1.8+ and the gamerule reducedDebugInfo is false (the default), your cursor turns into a red green and blue thingy. This tells you the direction of the three major coordinate axes. Red points towards positive X, Green towards positive Y and Blue towards positive Z, that is RGB corresponds to XYZ.

No matter how you oriented your command blocks, locate the one at the lower coordinate and set it to

In the other one, put

This example is for the X-axis, for another axis, move the ~1 and ~-1 to the corresponding position in the setblock command, e.g. ~ ~ ~1/~-1 for the Z-axis. I used smoothstone as my alternate block, but you can use any other solid, non-transparent block (transparent blocks, including air blocks, would cause lighting updates!).

Place a redstone block in the center to jump-start the clock. If everything is done correctly, this block is immediately recreated when you break it. 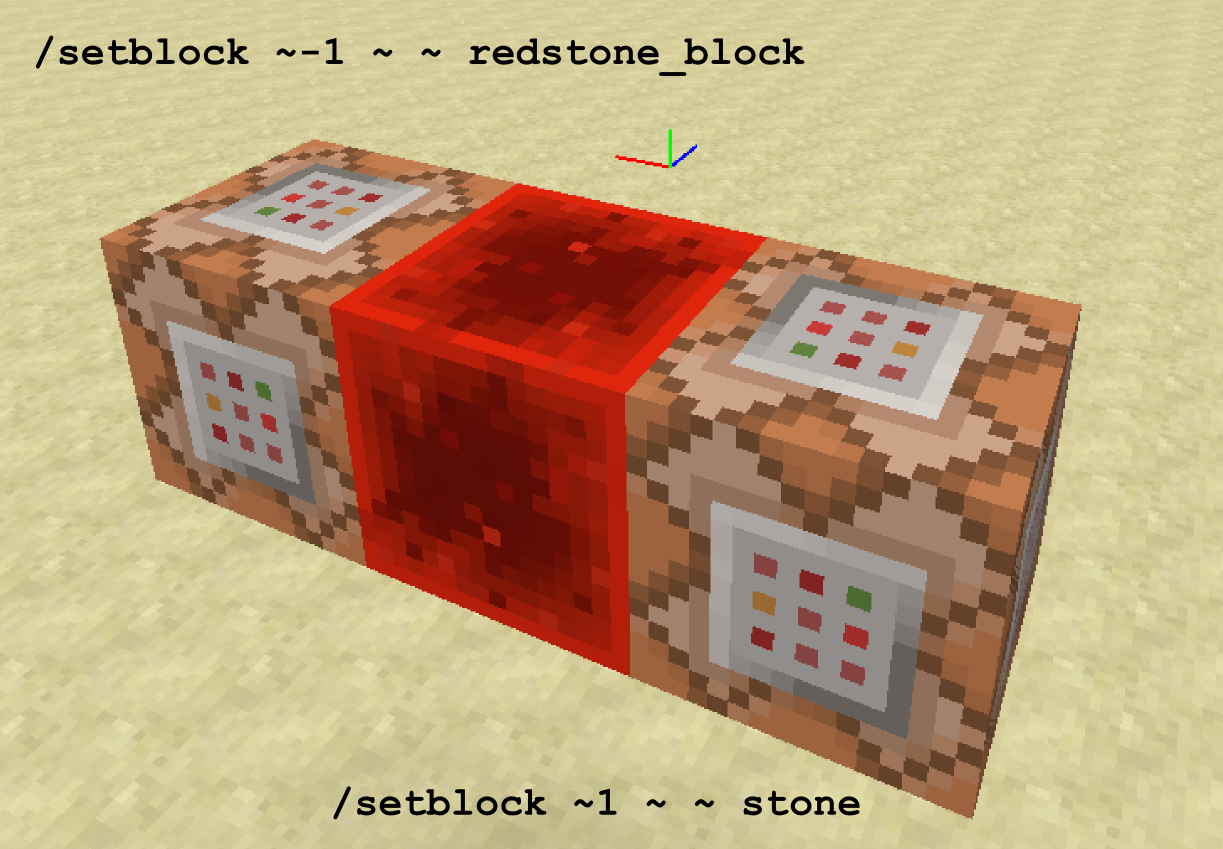 You can now place up to 4 other command blocks next to the redstone block. Command blocks on the same axis activate from lower to higher coordinate. The execution order can be more difficult when working on different axes at the same time though. If more than two of your commands require to be run in a specific order, I suggest using a fill clock instead.

A fill clock uses the same basic principles as the setblock clock, but allows for more commands to be run by creating a line of redstone blocks rather than a single block.

Instead of the commands above, use (again, command blocks along the X-axis)

This creates a 1 block wide, 5 block long line of redstone blocks along the z-axis. The length is determined by the second set of coordinates. 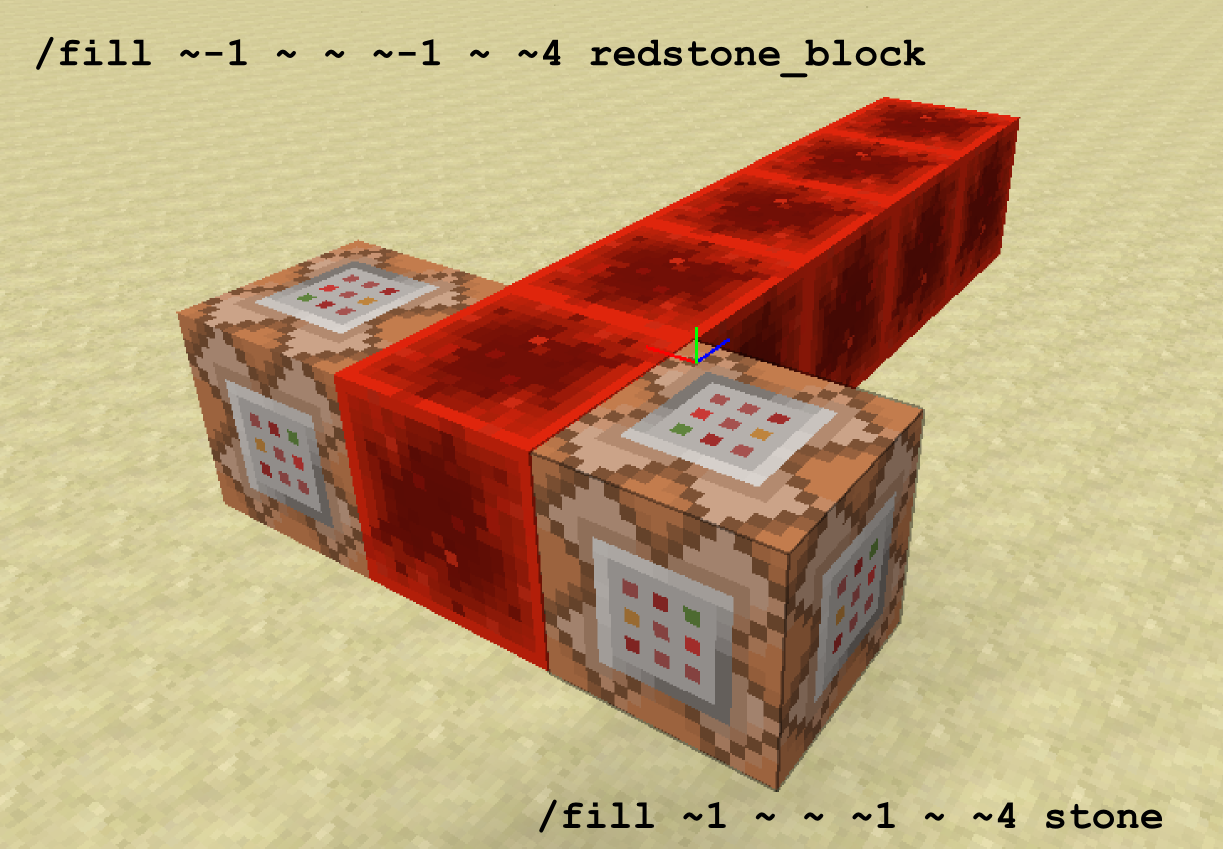 Wait, what? How does that work?

The way this works is that at the beginning of every game tick, the game sees a newly created redstone block next to the command blocks, and starts to execute the commands. It always starts at the lower coordinate, so it replaces the redstone block with stone. Directly afterwards, the second command is executed. While the command block is technically not powered at the moment, it was triggered and runs, immediately re-replacing the stone with a redstone block. Rinse and repeat 20 times a second.

6
Order of command block execution if triggered at the same time?
14
Why remove redstone dust from my command block contraptions?
6
How to make a worldborder that expands every in-game day at dawn?
7
How can I summon a mob with an always-visible name tag?
4
Random spawn for multiplayer Minecraft server
5
How would I go about making a custom minecraft item that triggers events when it's used?
2
How To Make Bow / Snowball that shoots Custom Named Arrows / Snowballs
0
How to testfor time with command block?
1
Get all players that aren't on two teams?
1
I need help with a specific minecraft testfor command
See more linked questions

1
Execute fill command relative to player
6
How can I receive a success output signal from command block on a fill clock?
1
Does using redstone cause a slowdown when using a fill clock?
1
How would I make a commandblock do setblock at a certain player
1
Setblock clock with scoreboard doesn't work in Minecraft
1
How to setup a clock in 1.9?
2
how to make setblock a command block with a command that is executed at a certain player
3
1.11 /fill Sticky Piston w/ Direction
3
How do you test for a named barrel/chest? (1.14.4)