Somewhere along the road to Jacobstown in FONV, if you turn right and keep walking, you will find a crashed UFO. There are aliens and if you kill the alien captain and loot him you will find an extremely powerful energy weapon. There is a special type of ammo used only for this plasma weapon. If you know what I'm talking about, is there any more of this special ammo anywhere else in the game? 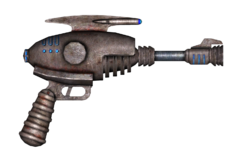 The gun you have found is the Alien Blaster.

The alien blaster has been a unique energy weapon found in several of the Fallout games, and is arguably the best weapon in the game, as you can one-shot almost anything with it.

The trade off is that the ammo you pick up for it is the only ammo available in the game.

That said, you can find ammo across all the aliens you encounter. I ended up with about 200 cells.

As a final note, the Alien Blaster will only appear in Fallout: New Vegas if you have the perk "Wild Wasteland". If you do not have this perk, you will instead encounter a different scenario, and find a unique variation of the Gauss Rifle.

The cells obtained from the captain are the only alien power cells in the game. Once they are used up, it is no longer possible to use the alien blaster, one of the most powerful energy weapons in the game, EVER again.