Will I have problems because of a harassment warning?

Yesterday I played a game where sometimes my enemy in mid lane went to the bottom lane. Every time he did that I used the ping enemy missing. My adc didn't hear it or didn't care and he died this way twice.

He started flaming a bit and I only said I've pinged. I said one more thing in this game for being late to join a fight.

When the game ended I received this message: 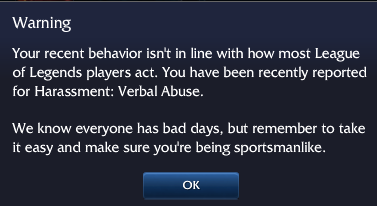 It was the first time that I saw that warning.

Can I get problems because of that?

This warning shows up if you have been reported multiple times and yes you can get problems if you are getting reported in the future.

This is basically the first stage out of three that occur after multiple reports. The three stages are:

Now to prevent innocent people from getting banned or restricted the warning message exists (There are always people who report everyone if they lose and sometimes you're unlucky and have 3 of those in a row). However if you recieve a Chat/Ranked restriction or even a ban you probably are a toxic player (or you have a really bad day) since it requires multiple reports in a row.

Getting banned is extremely rare but it can happen to the most toxic players in the community, and I'm talking about the constantly flaming and insulting ones.

If you are no tilter or flamer you shouldn't be too worried, however if you do show your frustration in chat you might want to try not writing anything at all while communicating via pings. Everyone has bad days and gets frustrated sometimes but instead of criticizing someone you should either try to be positive or neutral.

Compliments and a good attitude will also boost the team morale and further increase your chances of winning.

Why you received that alert :

Alerts will be sent to players after they receive a valid report through the post-game reporting system. Keep in mind you may not receive the alert right away, so even if in your previous match you were the picture of positivity, an alert can still pop-up a few games later.

Is there any serious risk of being banned ?

No. The Behavior Alert system is specifically in place to help prevent players from being punished by the Tribunal, so hopefully we'll be able to help you direct your behavior down a more appropriate and friendly path!

So you are probably fine, just make sure you are not being toxic.

It just means that at least one player was angry enough to fill a valid report.

20
What is the meaning of 'Tilting' or 'Being on Tilt'?
4
How is poor sportsmanship handled in League of Legends?

5
How do you finish a stalemating game?
9
How does Irelia counter Jayce?
14
How to pick the best support for your ADC?
5
Choosing the right team composition, making decisions
10
What is proxy farming?
9
Understanding last hitting and freezing a lane
5
Why do ADCs always go for damage over armor?
1
As a jungle how do i pick/play against a tank comp?