How can I make Terraria easier to play with controllers?

Since I can't really into WASD due to some issues with my left hand, and I have some issues gaming with a keyboard and mouse even without that, I was hoping to find something that suited it more for a controller like with the way they did the Xbox port.

It wouldn't be for competitive/online play, so I'm not worried about that very much, I just can't actually survive very well in most cases right now. I have to be twice as powerful as recommended usually just to function in an area without dying every few minutes.

Even if I can just set up the "directional cursor" type thing that they have on the Xbox port say for a toggle for when I'm exploring (and go back to regular for building) and a way to cycle through the hotbar items without hitting the number key I'd be set since I can set up the rest via XPadder.

Edit: To clarify for any user that has not played Terraria on console,

As of version 1.3.1, the PC version of Terraria has official controller support. It has presets for PS4 and Xbox One controllers, as well as custom support. 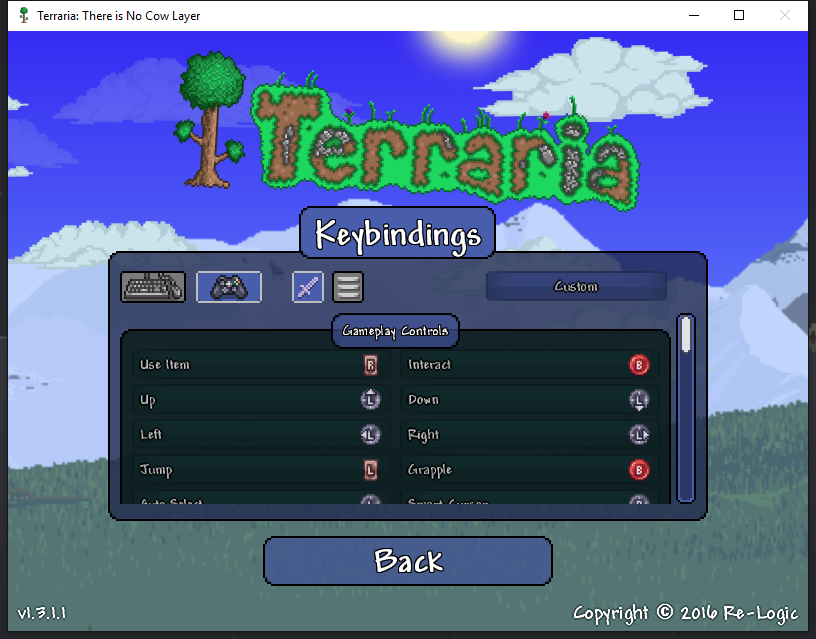 I had this same question a few weeks ago when update 1.3 came out, and I picked Terraria up again.

I highly recommend checking out the XInput Game Support Mod. It can be a little quirky to hook up, and as of now (few weeks after 1.3 Terraria released) it has a few bugs that they're trying to patch quickly. However, it helped my hand cramps a lot, as using an xbox360 controller is a lot less physically straining for me.

The forums can explain the setup better than I can.

Link is here on the Terraria forums: http://forums.terraria.org/index.php?threads/xinput-gamepad-support-mod.1260/

2
Is it possible to play Terraria mulitplayer online?
11
Can I play Terraria on a Mac?
1
How to play Terraria without Steam?
8
Easier mining in terraria? My wrist is killing me!
4
How can I make a molten pickaxe in Terraria if I can't mine hellstone?
2
Can Terraria on mobile devices play multiplayer games?
11
Is there a way to make the mouse cursor easier to see?
5
Can you make rainbow dye in Terraria?
1
Can PC terraria play with Switch terraria, if they are on the same version