How do I beat the 'Pogo Party' minigame?

I'm having a bit of trouble beating the Pogo Party Minigame in Plants Vs. Zombies. I've tried using:

Is there a recommended strategy to this level?

The strategy that ended up working for me was one where you place Tall-Nuts and Split Peas in the first and second row, as shown below.

Once you have this critical infrastructure set up, the rest of the map is pretty much cakewalk. Just be wary of the walking zombies at the start of a wave - that's what the Pumpkins are for. 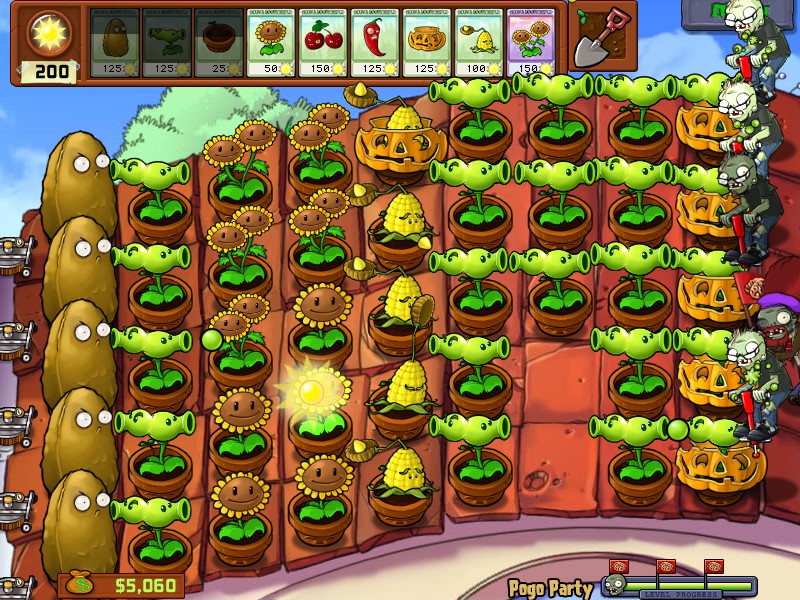 P.S. I put down some Corn Cobs but I don't think they are worth it. The Split Peas' slow planting recharge might mean you need an extra plant to take out the walking zombies, so bring the Cobs or something else along just in case. Or, use explosives and just focus on Split-Peas.

P.P.S. I used Double Sunflowers but again, I don't think they're needed. The Tall-Nut and Split Pea have fairly slow recharge timers anyway so you will be waiting on them instead of starving for sun.

P.P.P.S. The Explosives are nice to have in case the Tall-Nut isn't recharged in time (it's only 25 more sun than a Tall-Nut), but I didn't need them at all.

I use both tall-nuts and magnet shrooms to complete the mini game. Add a couple cabbage pults and some melon pults and your good to go. P.S. Make sure you remember to bring sunflowers and if needed, twin sunflowers. P.P.S. Bring imitater tall nut to help set up. P.P.P.S. If all else fails, use flower pots to delay the zombies.

Not the answer you're looking for? Browse other questions tagged plants-vs-zombies .

25
What is a good strategy for quickly earning money in Plants vs. Zombies?
9
How to predict when Jack-in-the-Box zombies are about to explode in endless survival?
14
How to obtain a specific plant for the Zen Garden?
15
How can I beat the Bobsled Bonanza Mini Game?
9
How can I restart the adventure level from level 1?
6
How do I play the full version of Plants vs Zombies under Chrome OS on a Chromebox?
3
How do you defeat the yeti zombie?
0
How do you get the monster masher achievement in the ipad version?
2
How do you complete columns like you see em?
0
How do I modify game1_10.dat to change the seed packages that appear in the top bar?