How do you earn more RP in League of Legends?

Is there a way to earn more Riot Points?

Purchase it digitally from the in-game store, or via gift card from a variety of retail locations, such as Best Buy using actual currency.

Riot Points: What, and How?

Riot Points are the "premium currency" in League of Legends, and the main method of obtaining it is by purchasing it with real world money, in the in-game store. Many game retailers will also sell Riot Points as gift cards. I would provide an image and values, but the cards and values differ, per country. You can find an official list of RP card retailers here. 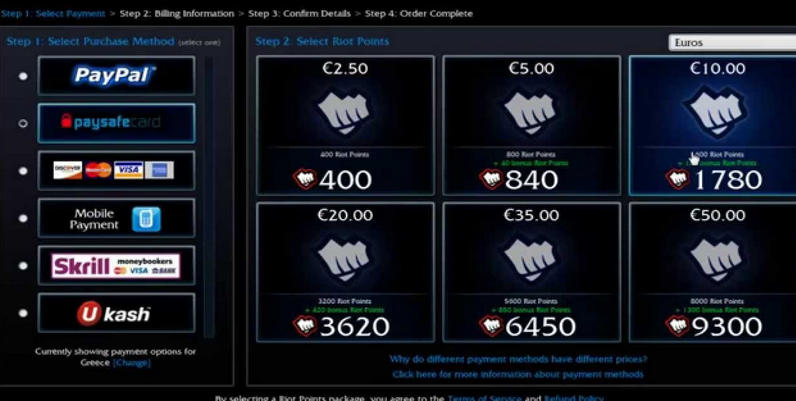 Other times a player may receive RP

The League of Legends Wiki has a few extra notes, concerning times where Riot has issued players Riot Points:

The idea behind RP

To give insight, this is a system often used as an alternative for making a particular game "pay to play". Players pay to unlock champions early, or to unlock cosmetic items. This way, the developers still make money out of their game, without directly asking each player to pay for it. Only cosmetic items require Riot Points to purchase. Champions can still be bought with Influence Points, and there is a rotation of "freely available" champions, to give players an opportunity to try different roles.

A word of warning:

There are many fake websites offering "Free Riot Points". These websites are almost always against the terms of service for playing League of Legends, and often give false promises of free points in order to steal player and account information.

RP (Riot Points) is how Riot generates income to run the infrastructure (servers, game developers, webmasters, moderators, electricity, etc.) that you all complain about all the time. hehehe... Without players purchasing RP, Riot would most certainly close it's doors.

You used to be able to refer friends for certain amounts RP, but they have since changed how that all works and now the bonuses are IP (Influence Points) instead.

14
Escaping from League of Legends Elo Hell
5
Is it possible to unlock more champions for bots in LoL custom games?
12
How do you unlock more Summoner Icons?
7
Do Legendary skins ever go on sale?
1
What are skins and how do I get them?
6
Skins that affect game mechanics
4
How much RP can I get at no cost
1
How does difficulty affect XP rewards in Co-op Vs. AI matches?