What video game are these ninjas in Pixels from?

In the movie Pixels, Josh Gad's character battles several chibi-style ninjas that are assaulting a school bus. I do not recognize what video game these ninjas are from. 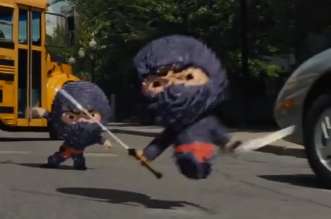 In the film, all the games that appear are from the 80's.

What game are they from, or are they from a fictional game like the "Lady Lisa" character, or were they sourced from 1980's pop culture, like the Smurf must have been?

The ninjas are from a fake 80's videogame created for the movie, called Dojo Quest:

Here's an article about the licensed games in the movie:

The filmmakers licensed characters from real-world video games for the movie, but they opted to craft a fictional title starring a ninja-fighting heroine named Lady Lisa (played by Ashley Benson), who serves as an unconventional love interest for Gad's character. To promote "Pixels," Sony released a side-scrolling mobile game resembling "Dojo Quest."

"Lady Lisa was in the first draft of the script, and I thought it would be fun to create just one game that didn't exist back in the '80s," said Columbus. "It never occurred to me not to do it. I felt like we could get away with it. A character like Lara Croft could've worked, but I loved the fact that Josh Gad's character has been pining for this woman all his life."