Where did the Nightmare and Hell difficulties go in Diablo 3 after the expansion?

I recently felt like playing Diablo 3 again, which I bought at release and played for a month and then lost interest. I realized they changed a lot of stuff, but I cannot make sense of those difficulty levels. I can choose to switch a game to "hard" or more, and there is some advice about having good gear and stuff. But I cannot understand where Nightmare and so on went.

I created a hard game with my level 59 sorcerer, went into act 2 and faced mobs with 1M hitpoints, which pretty much killed me instantly. Then I tried normal, and again it was a very hard fight. The items those mobs dropped were something like 100%+ upgrades to my gear.

With this character I used to play in Nightmare before.

I don't want to read two years worth of changelogs, so my question is simple: Where did the Nightmare, Hell , etc, selection go, or how was the difficulty scaling changed between release and version 2.2?

The old system of "Normal/Nightmare/Hell/Inferno" is gone completely, in favor what resembles the old Monster Power selector. New difficulties are called:

Difficulty of any given game is determined by its level (taken from the level of hosting player) and difficulty itself, in its new sense. So, level 35 monster on Normal will be weaker than level 30 monster on Torment I.

Below is a table of different difficulty aspects I've compiled during Patch 2.0 (some things may have changed). 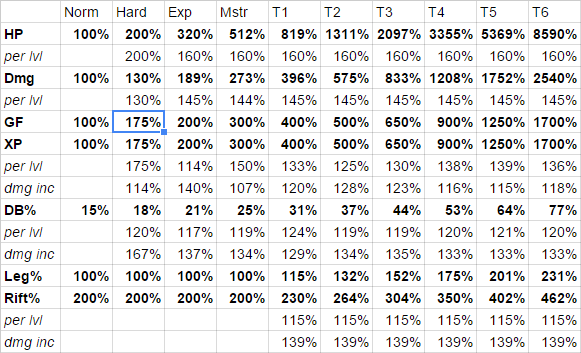 To sum up the changes: The old difficulty system "master one level and advance to the next" is gone completely. You can now choose your difficulty settings from the beginning. The higher the level the more rewards you can earn, but the nastier are the enemies.

1
Does gold find increase the amount you get from Boon of the Hoarder?

3
Does Magic Find in Diablo III work the same way as it did in the previous installment?
21
Where is the jeweler in Diablo 3?
17
Where is Development Hell and the unburied Jay Wilson?
22
Nepha-what now? What the hell is a Nephalem and why does everyone keep calling me that?
1
How much time does the chilled debuff last on mobs after being applied in diablo 3?
3
Did the loot table of Whimsyshire on Hell changed post-Patch 1.0.3?
10
Who did we kill at the end of Diablo 3?
1
Where did clans go from Diablo 3 RoS?