I am having no luck with two-way roads. They seem to clog really easy, even with moderate traffic.

This shows a ring of 6-lane two-ways around an industrial zone, the traffic is already queueing up: 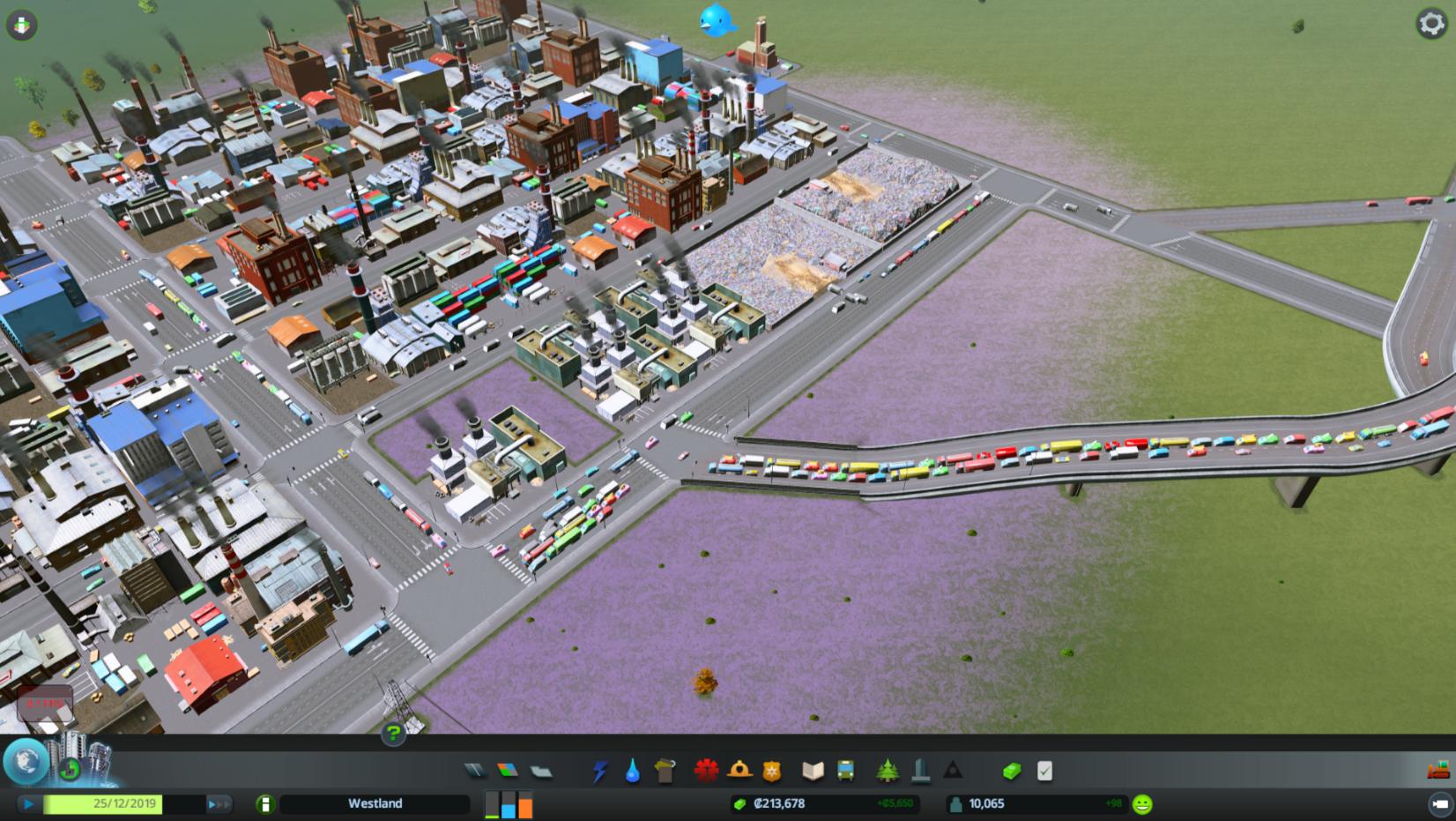 When I convert all the 6-lane roads into one-way roads, traffic seems to flow much better. However, I'm reluctant to do this for three reasons:

How/in what situations would I use big two-way roads?

The general plan with the use of larger vs. smaller roads, mimicking real life road planning, is to create a "hierarchy" of roads. See this guide for general ideas on planning road networks. With this in mind, the larger four and six lane roads serve as the "trunks" to two lane road "branches". These larger roads handle a higher volume of traffic at higher speeds, allowing users to reach the point of their "branch" which will take them to their ultimate destination (though these "trunk" roads can also have things built on them, like commercial buildings, which like the customer flow of the larger roads).

As far as two way vs. one way is the concerned, there are two things to consider:

1) Bottlenecks. Trying to force the traffic to take certain, pre-planned one way routes can backfire big time if you're not providing enough different ways for the AI to get to its destination. This is a big cause of the infamous "every car is pilled into one lane" problem people complain about. They're doing that because they're all trying to turn the same way at the next light.

2) Services. A complex maze of one ways is difficult to navigate, and can cause major delays in service response time. Remember that service vehicles in this game have no "right of way", they have to follow all the same traffic rules as everyone else. Because of this, a building might burn down even though there's a fire station directly next door, but next door the wrong way on a one way, causing the fire engine to have to drive all the way around the block.

For your screenshot, two suggestions:

1) As far as I can see, there's only that one entrance and exit from your industrial area. This is a bottleneck, and can be alleviated by giving the traffic more options, either through adding more road connections, or other transport options, like freight trains.

62
How do I connect the initial highway to my six-lane road?
9
Show the direction of one-way roads
8
How do I design an efficient exit from a large one-way road?
29
How to fix the "Not enough goods to sell" problem
10
My highway is backing up. What can I do?
2
In cities Skylines, can two-lane one-way roads be upgraded to three-lane one-way highways?