Would removing blocks under my terraria house make my house valid for npcs?

Crimson is getting very close to my house. If I dug a large hole around the bottom of my house, would that stop crimson from invading and making my village people leave? I have seen people dig a quarantine around their houses, but I don't have the materials or time to dig it now because it's very close.

If you're houses are made of anything except sand, grass:dirt, ice, normal stone, or mud* then the crimson cannot spread or convert them. Those listed blocks (and some of their alternate types) are the only blocks that actually convert. Blocks which are crafted are typically safe.

You houses only need 1 block of suitable material surrounding themselves, and the viable blocks for making houses are ones which are unaffected by crimson spread. However NPCs will abandon them if crimson gets too close. The effective area for detection by NPCs is 45 block radius. It checks this area and determines if more than 500 blocks are crimson or corrupt. Consider that certain natural blocks don't corrupt (air, mud etc) and you are likely surrounded by other crafted blocks you may not have to worry. 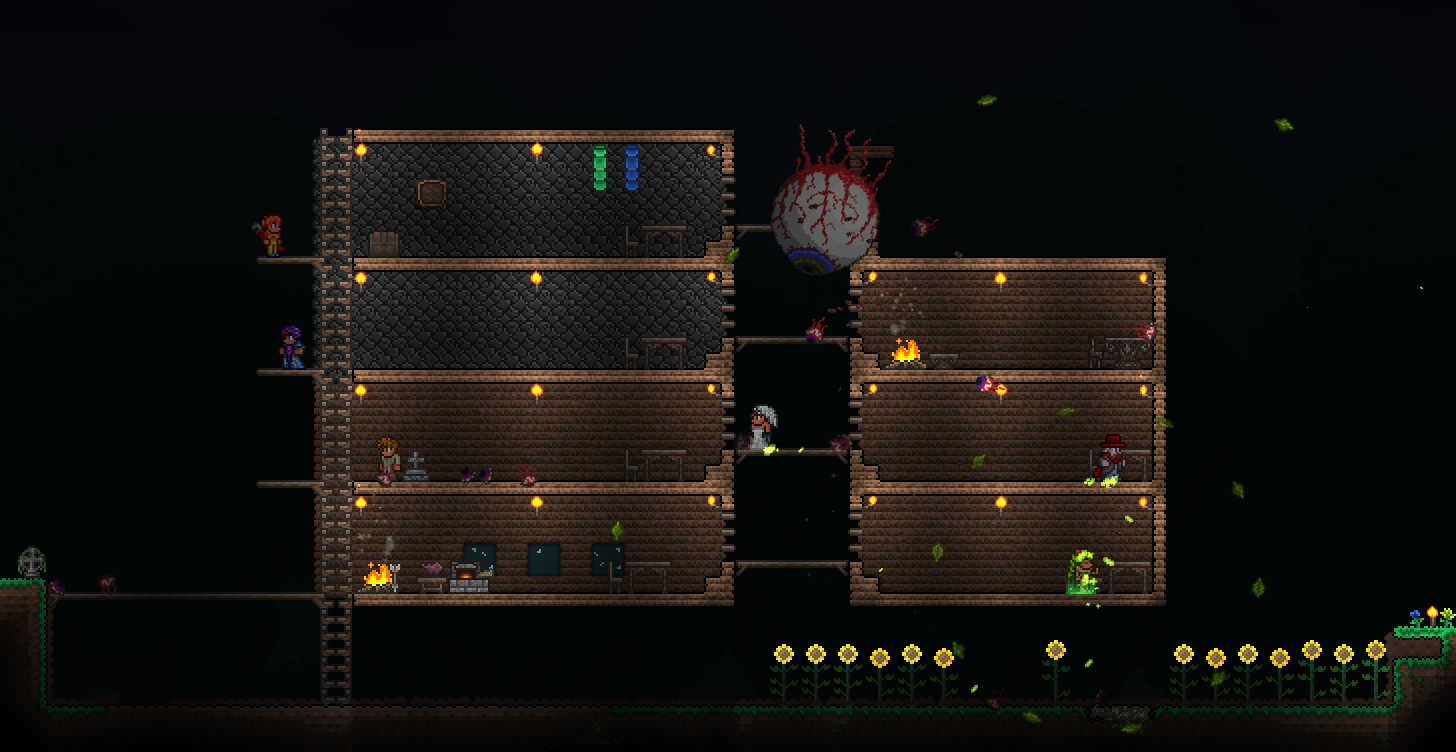 Also note that planting sunflowers will negate some of the detected blocks (5 blocks per sunflower). So if your entire base is above ground and crafted blocks, then only the area below is of concern. So, taking (pi*45^2)/2 is area of 3180 blocks or basically you need to keep the crimson 56 blocks away from below you and around you on the surface. If you build beneath the surface then you will need to keep a perimeter of 79 blocks free from crimson/corruptions (less if you are not at least that many blocks beneath the surface.)

The best way to protect your entire area is in fact to either dig a gap or place non-spreadable blocks between you and the crimson.

However, even if you build your walls out of blocks the crimson can't convert, the crimson does not need a direct connect path to a block to convert it. The range is 3-5 (depending on the block) So making a gap space of 3 air blocks (so you don't waste materials) is typically a good approach. The blocks that are reached at 5 spaces don't convert to crimson, but to other non-corrupt/crimson blocks instead. The time it takes to do this is very minimal, if you start pre-hardmode you can just surround the crimson which is typically small. If you missed your window of opportunity then making the gap around your own area would be easier depending on how big your area is.

Alternatively if you have the money you can by purification powder from the dryad npc which when used will convert a biome to forest biome (removing corruption, crimson, hallow, and any other biome) This option is available early on, even before the crimson begins to spread. This option could be pricey, but the dryad can be available long before crimson begins to spread.

I will update this part with more accurate information later....please ignore it for now.

I've been using purification powder since I got access to it, here is a shot from my most recent world I just started playing. I am prehard mode. You will see that I am converting but do have a lot more to do.

A 3 block wide hole around the whole bottom of your house will work as crimson can't grow that far away. Be sure to make the hole connect under your house or underground to ensure no crimson slips in that way.

70
How do I build a house for my NPCs?
7
Do active stone blocks count as a floor for a house?
4
Can my Terraria building be above ground for NPCs to come?