Exploring the City of the Undead - How can I recover my possessions here?

So... I was fed up with dieing against the gargoyles and decided to check out the preceding areas. In the city of undead (before the taurus boss) I found a cliff, directly beside the stairs leading up to the tower.

To my dissatisfaction I wasn't able to get into the hole in the wall below the cliffs and died. Now my posessions (which is a not inconsiderable amount of souls) are lieing there, easily accessible on the cliff.

But as I see it there's no way to get back up from that cliff without dieing from the fall...

Is there any way I can recover my posessions from there? 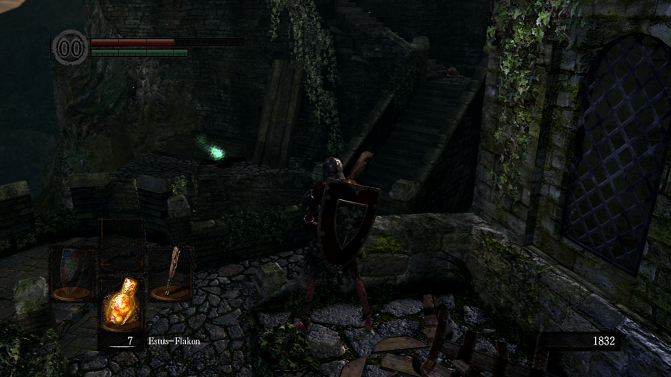 There is a way back. I've marked up a portion of this map to show you how. 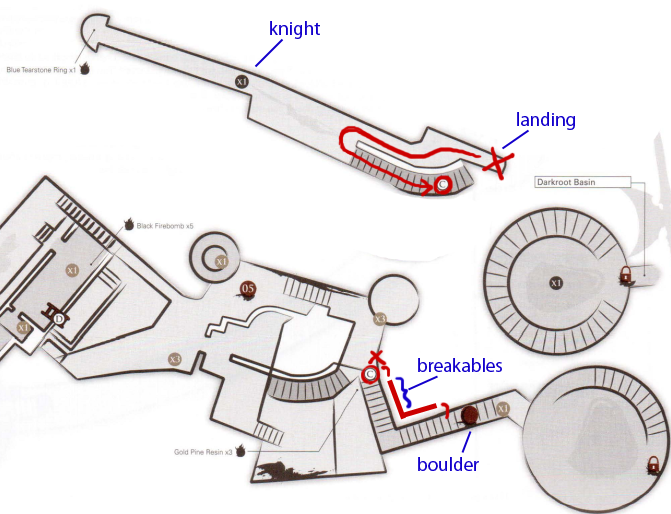 Homeward bones work just as well, of course, but the drop to get back up is quite safe. The real danger is in jumping off in the first place.

I think this was meant to be a place to escape the boulder trap at the last second but anyone attempting this should definitely edge off and to one side (so probably walking off the stairs while heading up them would work) but jump or otherwise step off too energetically and you'll miss it.

Once you're down there, just break the stuff to find the path to jump off and get to the stairs by the knight to get back up to where you were before. This means you don't have to use a homeward bone (which aren't exactly abundant so early in the game in NG) and you won't have to deal with respawned enemies.

Once you pick your souls up, use a Homeward Bone. The item will teleport you back to the most recent bonfire. They can be bought for 500 souls from the undead merchant in the sewers of Undead burg

19
How can I gain humanity in Dark Souls?
10
Can you kill the Drake in the Undead Burg?
2
Are there any missable item in the Undead Asylum?
5
Is it worth killing the dragon on the bridge in Undead Burg?
9
How does the game determine if I can wield a weapon with two-hands?
4
Starting in the “Undead Parish” there is an armored boar. Is there a better way to defeat him than head on?
2
How much Sin per NPC?
4
Is there a shortcut from the parish to Undead Burg in Dark Souls?
2
Is the Chosen Undead the same person in both Dark Souls and Dark Souls 2?
14
What are these white rings in the Undead parish?