Before I ask this question, note that I am referring to a strange error in the console when starting my server, not a strange kill tracking weapon in Team Fortress 2!

When I start my server, I get 2 strange sounding errors in the console. They both relate to, what I think is, missing textures. This does not affect the game play so far, but have not seen these errors on other servers. I say this is strange because I have followed the official Team Fortress 2 Dedicated Server set up guide. I have taken screenshots of the two errors:

This is error one. A lot of missing skybox textures are detected which may effect some maps.

This is error two. This is the most interesting one because it seems to be missing the variable $CO_X which seems to be referring to a development texture.

Any help regarding fixes to these errors, or what these errors even are would be appreciated.
Note: I have sv_pure set to 2 and SourceMod and MetaMod installed. No plugins are installed however. You can find my server.cfg on pastebin.

EDIT: Later on I was on my server and I opened the terminal to this. I don't know what it is but seems like more missing textures? 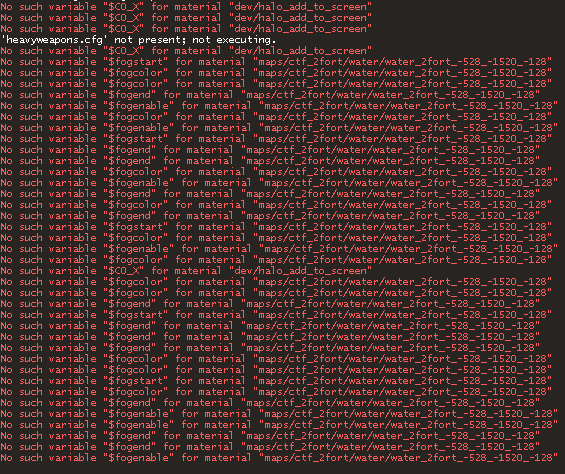 As for the client console, as much as I hate to say it, a lot of errors like these can just be ignored. This wouldn't be the first time Valve has materials that are missing values in their VMT files.

Not the answer you're looking for? Browse other questions tagged steam technical-issues team-fortress-2 hosting or ask your own question.