How can I use an Xbox 360 headset through a PS4 controller?

I have an Xbox 360 headset that I'd like to use through a PS4 controller.

It is a 2.5mm connection. Are there connection cables to convert from a 2.5mm to 3.5mm jack?

TL;DR: If you adapt the connections, it should work off the bat. There are a few things to check to make this go smoothly, but it should be as simple as plug and play.

2.5mm to 3.5mm adapters are quite common, however, the channels you require make a big impact. On the Xbox 360 headset, check the plug. Count the rings, and ensure that the adapter has at least the same amount. Each ring is a channel. You should expect three; Two for your left and right sound, one for the microphone (or two outputs, one input).

Finding the part at a store

If you wish to go to a physical store, ensure you are heading for an electric wholesaler. They will charge you considerably less, and are more likely to have the part. All you are having to ask for is a "x channel 2.5mm to 3.5mm adapter".

A lot of people come into my store for that part. As an electric retail store, we only really stock the connection for using them on a plane, and as such, only support 1 channel sound. We also charge 10x the price, because it is in a packet. The same would go for places such as Radio Shack (assuming localisation without further knowledge) 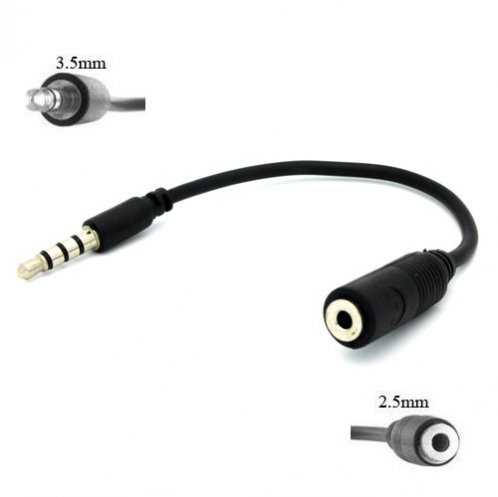 Most of the time these connections follow universal suit, and it should work without problem. According to this question, regular earphones will work for audio, suggesting a better chance. If you have a pair of earphones with a mic (a cheap pair is almost always packaged with mobile phones as a cheap "hands free" solution), plug them in, and see if they work.

As a slightly related point, if your thinking "I don't know where the hell that is! I have a Bluetooth plug for the phone", you will likely find that same Bluetooth works as a headset for the PlayStation 4. (I can only confirm the PS3 supported them, as people used them as cheaper alternatives to the original).

Not the answer you're looking for? Browse other questions tagged xbox-360 ps4 audio-hardware .

13
Can I use the Xbox 360 Headset for game sounds instead of voice chat?
2
Using a standard dynamic microphone (3.5mm male mini jack) + a 3.5=>2.5 adapter with an Xbox 360
1
Can I connect a headset to a PlayStation/DualShock 4 controller?
9
How can you use headsets with separate Audio and Mic cables for Dualshock4?
2
Xbox 360 game sound through headset
43
Can I use an Xbox 360 controller to play Xbox One?
1
Headset Cross Compatibility for PS4 and X1
2
How do I use a headset with 3.5mm jack on my PS4 while using a mouse & keyboard?
0
How can I use a 3.5mm Headphone jack as mic only and have a usb headset as output only