I'm currently evaluating to buy a 4K computer screen to use in 2160p natively while coding or working with Windows but I plan to play my games in 1080p because 4K rendering is of course a very heavy job to do for any CPU&GPU. Currently I'm very happy with 1080p gaming and it would be great for me to have one single screen in those two modes.

Now, I stumbled upon nvidia's Dynamic Super Resolution technology and I wondered (but I could not really find out) whether it (or any other tech) can be used to tell the GPU to render a 2160p image exactly by bloating up a 1080p image to the doubled size per side . So that there's no need to interpolate any pixels and the 2160p-image would just look as crisp as the 1080p on a 1080p-screen (of course with the same non-4K-amount of detail).

Please have a look at the attached image I have stolen from http://linustechtips.com/ and extended with my comments: 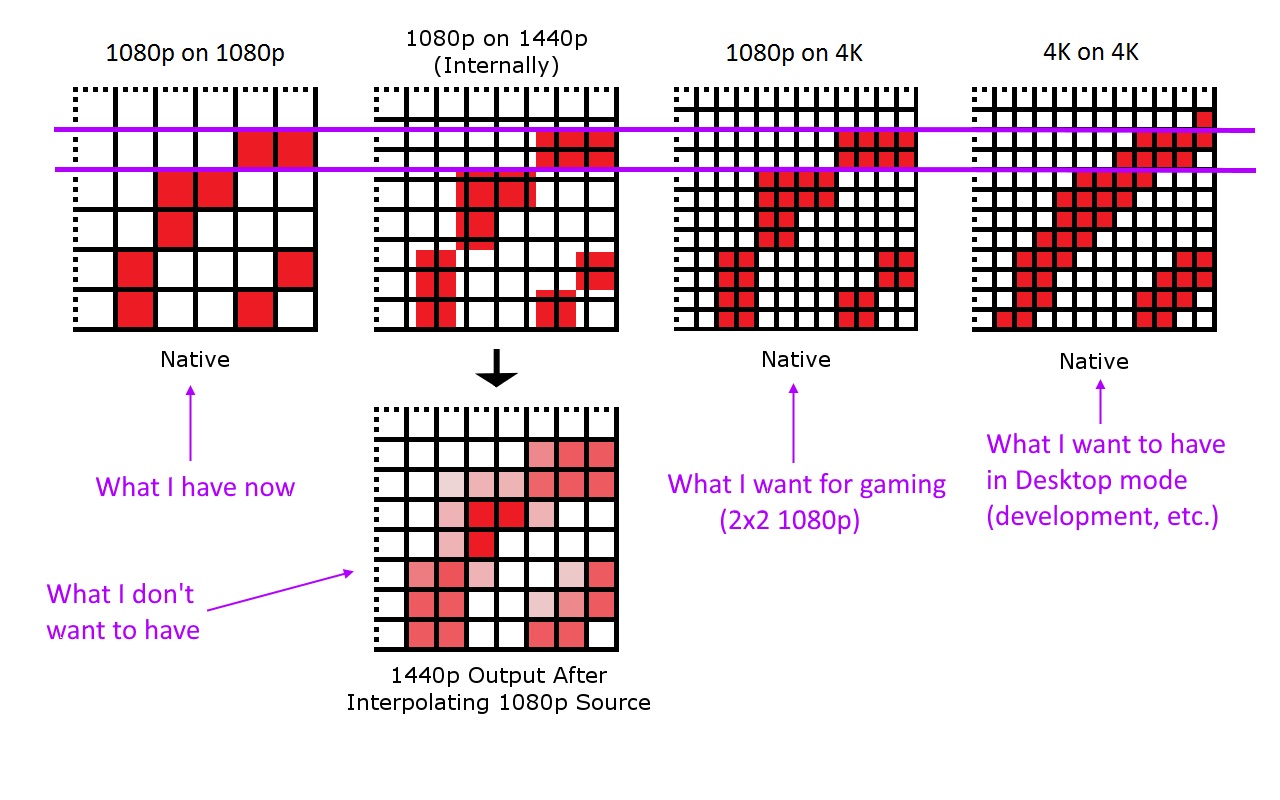 EDIT: I know that DSR is supposed to perform downsampling high-res images to a lower-res screen. So it is the opposite of what I wanted to have. But maybe the nvidia driver can do the other way round as well (maybe it's not called DSR then but I don't know).

The DSR article is about a 1080 display benefitting from 4K rendering, which is the opposite of your use case.

For gaming, you're just going to want to use the monitor's native resolution so that the monitor doesn't tamper with the image.

Certain displays are able to do the pixel doubling.

The scaling is now simple pixel doubling at 1920x1080 so it so it renders well without the scaler messing with the image. This is better scaling (IMHO) for computer/game use which is what people running at 1080p@120hz would do.

That's the feature you're looking for: "pixel doubling". Stay away from bilinear or bicubic scaling.

Okay, this topic seemed to be harder to illuminate than I ever had thought. So I just bought the UHD screen I talked about and I can give you my sight on this topic:

Gaming on 1080p is not a big deal and I find the results quite good on my screen (Dell P2715Q). It seems not to be blurry - at least not that it would bother me. Gaming on 2160p just looks gorgeous but that was no question to me. By the way I had a looong discussion with nVidia about the pixel doubling I wanted to have but they have no option to achieve this. At least they want to investigate it but I don't know if this was just a default phrase.

The real downside is not the gaming at all. The scaling of the desktop applications is the real problem for me. Most of the non-Modern-UI applications fail at rendering with DPI-scale. Running the desktop mode with 1080p could help here but this is not why I bought a UHD screen.

I love the screen and I think I can get used to the scaling in windows but I'd say that anyone who's thinking about a 4k screen should think more if he'd can go with DPI-scaling than about if a game looks good on 1080p.

Not the answer you're looking for? Browse other questions tagged graphics-card monitor or ask your own question.

2
120 Hz display for gaming
2
Unused area of laptop display while gaming
3
AV to HDMI 1080p Scaler Video Converter Outputting Sound But Not Video
2
What are the differences in scaling on the GPU vs on the Display?
2
Can you connect an External Display with a higher Refresh rate to a Razer Blade Laptop that has a 60hz Display?
1
Dota 2 user interface / display problem
0
Playing the game on the main display