Jämtland: I was too poor to create a Duchy

I've tried playing as Jämtland, which starts as a lone Catholic count surrounded by many independent Pagans.

Its de-jure Duchy has only 2 counties, but the other one belongs to Norway, so let's ignore that.

Just to its north and east there is an unformed de-jure duchy made up of 5 counties, all pagan, all independent… borrowed money from Jews, hired the cheapest mercenaries I could find, and Holy Warred 3 of them into submission, enough to create the Duchy.

I solved this, trying again… rushing.

Time is of the essence: since you pay every month, the less it takes to conquer the target counties, the higher the chances you still have enough money to create the duchy. 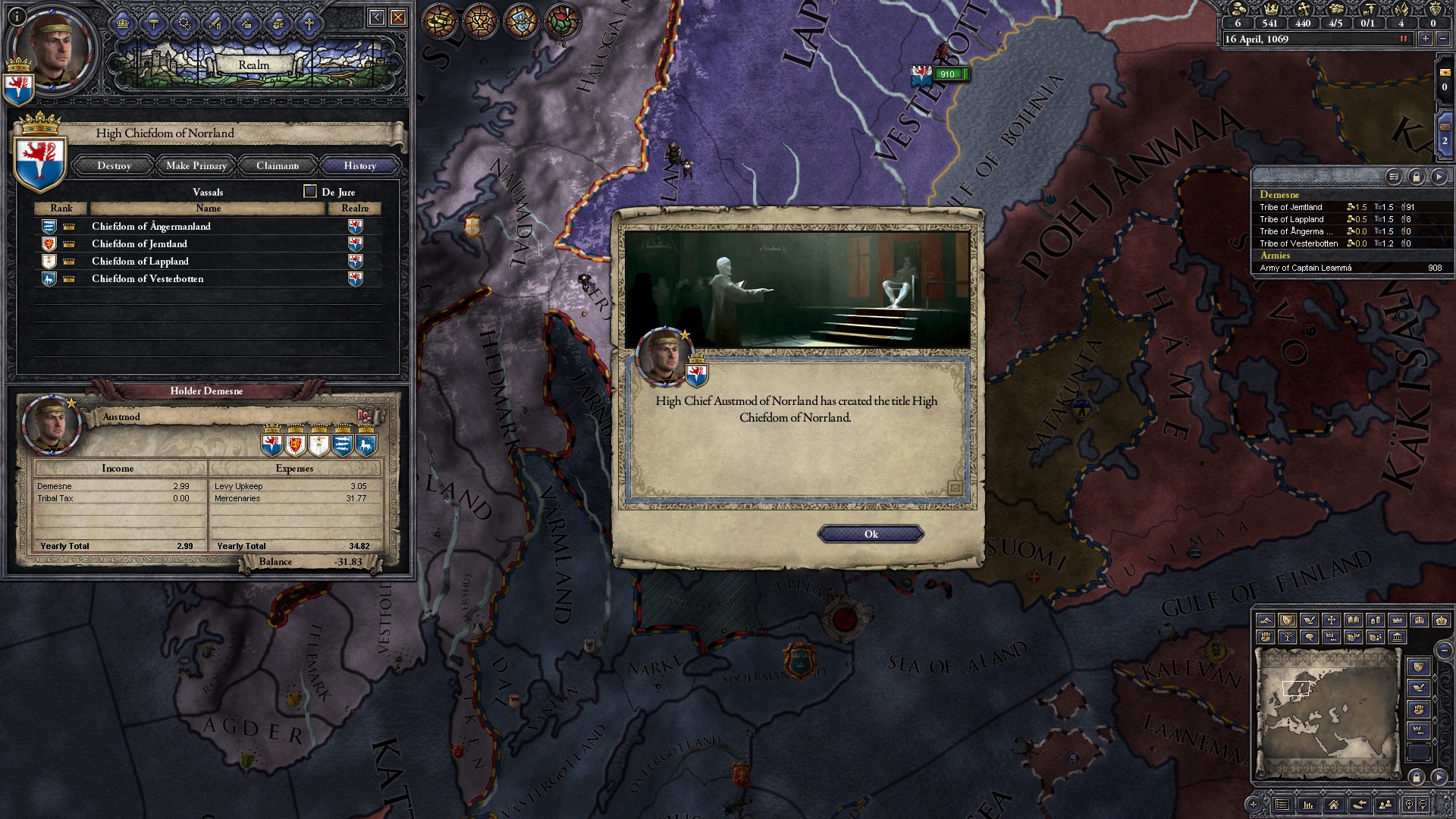 These are the relevant steps I did:

I managed to do this on the fourth try (including the three failed ones before I asked this question).

This one is not immediate, but if you have way of life DLC you can choose business focus and hope an investment pays off

As you recently asked, you can Expel the Jews. This gives you a one-time lump sum of 5x your yearly income. It also removes the -10 church penalty for having borrowed money at the cost of 2 diplomacy: this will probably turn out to be a wash, but it's worth checking again to see if the Pope will gift you money with a change in opinion. You can welcome the Jews back in 20 years or immediately after any succession, which it may be worth trying to engineer your own demise if you have a qualified heir ready to inherit. This would get you another 300 gold loan right away followed by another potential expulsion. This is kind of gamey, but it's definitely the least costly way to repay your loan...

Also, you say that the Pope didn't feel like giving you the cash, but you don't say why. As long as he has the cash (which I've never not seen a Pope with 10k+ gold on hand) and you're not already at +100 opinion, it can be worth trying one of the following to sway his opinion:

You mention in a comment that you have no vassals – do you not have any other holdings built in your county? If you do have a city-vassal/mayor, raising city taxes is usually a good move.

Aside from that, I would try to figure out why you steward can't collect taxes. Are you a tribal Catholic?

12
What methods of suicide cause the least amounts of collateral damage?
7
What happens if you expel the Jews?

11
How can I claim a duchy from an unrelated courtier, and keep the duchy in my kingdom?
4
Exceeding the Duchy limit, Kingdom Titles and when to create or not create titles?
1
How to claim counties of my duchy?
8
Can I undo the creation of this merchant republic?
2
How can I easily consolidate dynasty holdings under one ruler?
2
How can one deal with tribal, pagan vassals
3
Crusader Kings 2 From Count to a Duchy
2
Why my duchy took my county?
1
How to revoke duchy from a pope
1
How can I steal a duchy under my liege?