Is there any danger in using the Fatman?

So the Fatman weapon dropped from an awarded lunchbox and I was wondering if using it inside the vault could cause any friendly fire or anything like that.

Fatmen are a bit slow to aim and fire; you won't get more than a couple of shots off at deathclaws, but it will take raiders, molerats, and radroaches down very efficiently.

Fatmen look like they are slow to aim and fire, but enemies will still take damage the entire time the running aorund the room/aiming/firing animations are playing. Source: Two Deathclaws dropping dead while six fatmen toting dwellers ran around the room trying to get their shot lined up. No one actually got around to firing the fatman before the surviving deathclaw fled the room. 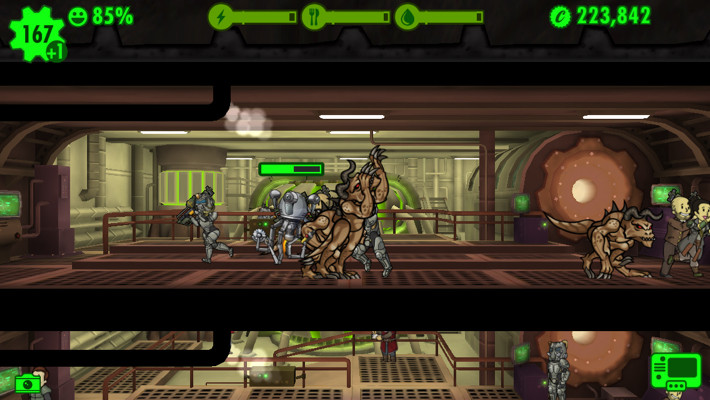 When a dweller finally does get a shot off, it looks pretty cool.

The explosion from the Fatman won't hurt any of your Dwellers. So it is completely safe for it to be in the vault.

Not the answer you're looking for? Browse other questions tagged fallout-shelter .

6
How does the fatman deal damage?
3
Is the damage calculated as Damage per Second or Damage per Hit?

10
Can you ever stop the raiders?
9
Consistently worthless items
1
Which unique dwellers can be found?
5
Can you share Lunch boxes between vaults?
8
How am I supposed to use the Radio Room?
13
What is the maximum number of guards that can be assigned to the vault door room fully upgraded?
8
How do you deploy Mister Handy?
13
Maximum time of exploring the wasteland and possible rewards
6
Which outfit should I use for vault entrance guards?
1
How are Feral Ghoul attacks possible?