Who is the bandaged man?

In the prologue to MGS V, you're attacked while recovering in a Cypriot hospital, and narrowly led to escape by a fellow bandaged patient. This escape culminates in an car crash that leaves you briefly unconscious after a helicopter strafes your vehicle with bullets, seemingly killing your benefactor. Upon recovery, the driver's seat of the vehicle is completely empty, with no blood or other trace of injury apparent, suggesting there was nobody present at all.

So who exactly is this bandaged person? Are they just a figment of Snake's imagination to keep him going in dire straits? If that is the case, what's the explanation for other segments in the prologue where said person interacts with other characters? For example, when he throws bottles at the would-be assassin right at the level's start, or drives the ambulance into the Burning Man.

Is there any explanation for this? Or are we simply left to decide on our own whether there was someone there besides Snake? 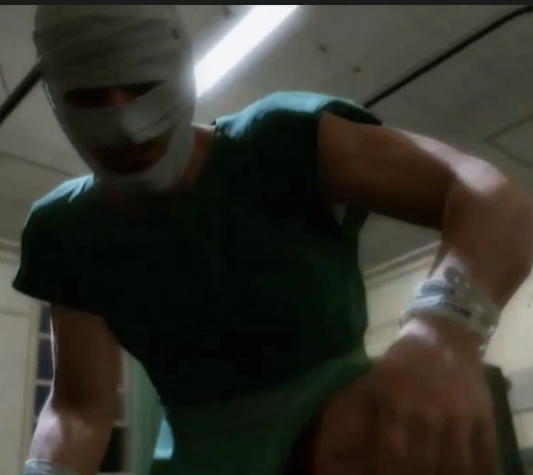 Ishmael is not an illusion, neither is the burning man that appears later on. One of the first cassette tapes given to you by Ocelot after the prologue is evidence that Ocelot also saw the burning man himself.

As for Ishmael, his identity is a major spoiler. He is heavily involved with Big Boss, so you should ask yourself twice if you want to read on.

He is Big Boss.

This inevitably leads to the next question:

Who is Venom Snake, if not Big Boss?

And the answer to that is (contains additional spoilers for GZ):

He is the unnamed medic who had to remove a bomb from Paz' stomach at the end of GZ. In TPP, he is unknowingly acting as a decoy for Big Boss.

All of this is revealed in mission 46: "Truth: The man who sold the world", which is almost an exact copy of the prologue mission 0, except for the beginning and the part where Ishmael leaves the ambulance, revealing his identity in the process. That mission is also the last story mission in the game, the missions following after that one being repeats of earlier missions.

The Masked guy is NOT Big Boss. He peed his pants during the escape and Big Boss would never peed his pants. The identity of the masked guy is one of the regular goons that is part of the SWAT team members. They didn't kill you because they know who he was and let you live. The original masked guy that saved your life already died in the hallway with the other patients. The one that saved you from there is a double. Again, he can not be Big Boss because Big Boss never pees on himself.

Pretty sure it is the character you create. At mission 46 ( Spoilers ) You hear that they have to do something to Snake's head and the guy you're playing as there's head in the hospital. This is after the helicopter crash that featured Miller, Paz and the other kid. Where the chopper that evaded the Mother Base attack and explosion was blown up by another chopper. In Prologue you find that you have to create your character whilst looking into a mirror. This suggests that you're actually playing Snake as someone else, you're experiencing him. His past memories etc. And mission 46 features that you're ( the guy you're playing as ) is in the hospital next to Snake, and the guy that was masked in prologue was next to you as well. So there's something fishy going around here. The masked man is probably your character that you created in Prologue. This is no research and facts but a theory of mine that I've come to whilst playing MGSV-TPP and probably one that relates the most and makes the most sense to be true. But I do not get one thing, the bodies are swapped in Prologue.

At the start of the prologue big boss asked the bandaged guy who he is, the answer big boss got from the bandaged guy was "I am you". It is not a spoil because he mentions it at the very start. But i'm guessing many of you guys did not here him say that.

Im sure it could have been Eli's dad. In the game (spoiler alert) he said Eli was not related to snake in any way but what if he was related to the guy at the hospital maybe Eli's dad wasn't around because he was in that hospital.

1
I don't understand the ending to Metal Gear Solid V: The Phantom Pain?
10
What is the most effective incapacitation?
4
Can I make the missions easier?
13
What use is the water pistol?
3
In Metal Gear Solid V: The Phantom Pain, where is the photo camera?
6
What or who is a cut out?
3
How to reach the power plant?
3
What's the meaning of a highlighted side ops with a dot on the left side?
2
What language are the soldiers speaking in Mission 19 “On the Trail”?
2
Why was Snake in a coma at the start of the game?