I am new to Smite and I have only been playing for 2.1 hours and I'm really enjoying it. My question is, when I get into a more competitive Smite game, is there any callouts that I need to know?

In smite, people don't use chat to make callouts. They use the VGS system. When you press the 'V' key it will open a menu to the left of the screen, giving you choices of things you can say. It takes a while but you should learn as much of this system as you can.

Another thing you can do is hold the Alt key and left click the map. This will ping the map, alerting anyone on your team to go to that location. You can combine this with VGS to tell people to attack or defend certain areas.

The main callout you need to know is Gank: This is basically a surprise attack launched from the jungle. When someone calls that they will gank, you are expected to deal some damage to your laning opposition to make it easy for the jungler to gank. They will usually tell you which lane they will gank.

Just be sure you learn a little bit of the VGS system and the parts of the map. 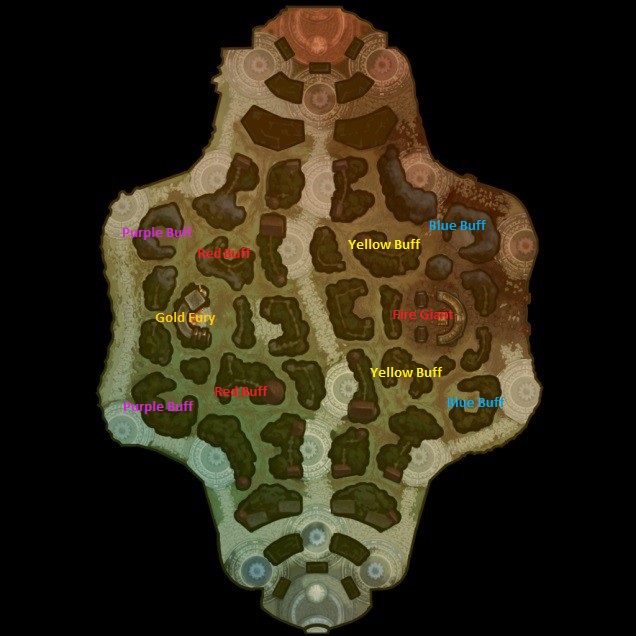 This map shows the buff locations (its the best I could find :P). Purple Buff is Attack Speed
Red Buff is Damage
Yellow Buff is Movement Speed
Blue Buff is Mana
Gold Fury and Fire Giant are important objectives that will be explained by the tutorial if you walk near them for the first time.

From all this information callouts that people make should be pretty obvious. Good Luck! Enjoy Smite.

Not the answer you're looking for? Browse other questions tagged pc smite or ask your own question.

0
What do the blue/purple item prices mean?
2
How do Gold rewards in Smite work?
1
Is there a way to read my god's abilities before the game starts?
1
Do certain player skins have tactical advantages in Smite?
2
How large is a Smite Arena map in units?
7
In Smite, how do I address the problem of jungling/ganking in Joust 3v3s?
8
How to develop a buying strategy?
1
Does ADC strictly mean Hunter?
1
Checking Time Played - Sea of Thieves