I've been using alexmoon's KSP Launch Window Planner to plot transfers from the Mun to Minmus, but the trajectories that I get are quite far off, and I feel like I must be doing something wrong.

This gives me a trajectory that goes out well past Minmus in terms of distance from Kerbin, but it doesn't deviate much from the Mun's orbital plane, and it passes well above or below Minmus's inclined orbit — far enough that I don't get an encounter. The ejection inclination shown in Precise Node is much less (around an order of magnitude) than the one shown in the planner.

I can usually "fix" the trajectory by adding another maneuver node somewhere along the path, with a burn in the normal or anti-normal direction to point it toward Minmus's orbit — basically, a mid-course plane change even though I asked for a ballistic trajectory in the planner — but that shouldn't be necessary. I understand that minor adjustments will be needed since my starting orbit isn't the perfect one that the planner assumes, but having to add a major maneuver seems like a bit much.

I've tried setting the planner to produce a transfer with a mid-course plane change, but haven't had much luck with that either. And the in-game Transfer Window Planner mod (which only seems to support ballistic trajectories) produces the same results as the web-based planner.

I feel like I'm missing some crucial step in translating the results from the planner into a maneuver node. In particular, I'm puzzled that the maneuver node's ejection inclination is always so much less than the value shown in the planner — even though (I think) that's determined mainly by the normal Δv, which I copied exactly from the planner, and my starting orbit is very close (0.06°) to equatorial.

Can someone enlighten me? 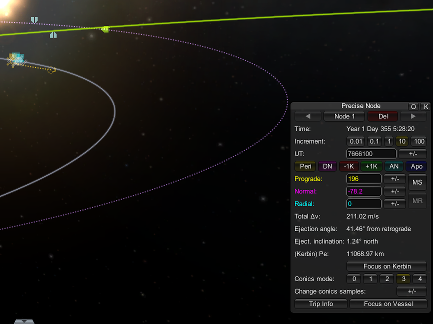 I asked the planner for a ballistic transfer from Mun to Minmus starting on year 1, day 356, with an initial orbit of 104km. The key details of what it gives me are:

But the ejection inclination that Precise Node shows for this maneuver is 1.24° north — very different from the -6.76° shown in the planner — and you can see that the trajectory puts me way above Minmus's orbit at the closest approach. It goes out "far enough" to get there, but the plane change is completely wrong.

My spacecraft here is starting in an equatorial orbit (0.05106° inclination) around Mun, with apoapsis at 107km and periapsis at 101km (not perfectly circular, but that shouldn't affect the inclination change much).

The time given in launch window planner is completely orientational - definitely not to be used as the precise departure moment. You need to fine-tune the time for the exact departure angle and inclination.

The window planner has no clue about your initial/current argument of periapsis, therefore it can't suggest the precise moment to start the burn - that moment completely depends on your current position in your current sol's orbit.

Imagine you launch two probes into the same orbit, exactly half an orbit apart. When one flies over the dusk terminator, the other crosses the dawn line. Since the orbits and the destination are identical, the window planner will give both exactly the same departure date and delta-V components. But at the moment of the optimal burn they will be on two opposite sides of the planet, flying in opposite directions - how would you expect both, performing exactly the same burn relative to their current speeds, to end in the same place if they depart in two opposite directions?

What you do instead, you set the burn values, set the time to have roughly the right departure moment, and then adjust the precise burn moment to have the desired ejection angle and ejection inclination values. The departure time will be off relative to the "optimal" but that's a relatively small error which you should fix by a mid-course correction.

(if you desire to avoid mid-course correction, can perform a very precise, high-thrust burn, and want to arrive precisely at the target, you may do the above, note down the time when the burn should occur, convert the seconds back to date, find the new point on the graph, note down the new departure angles, fine tune the time and speed for the new values... repeat as necessary iteratively increasing precision.)

4
When should I perform the inclination matching maneuver?

4
When should I start a trans-munar or trans-minmus injection burn?
7
Does fuel feeding make sense?
20
Focus current craft on orbit map
4
Why has my Command Module's orbit not decayed?
11
Do Kerbals die of natural causes?
7
Find location when flying a lander in KSP
1
Can't control small probe launch
4
When should I perform the inclination matching maneuver?
3
What is that colorful display under MechJeb's Maneuver Planner, advanced transfer to another planet option?
3
Can you only get the same science once?