Does the 'Engi Virus' have side effects?

I've encountered a spaceship that stated that I have a virus.

I've sent an Engi to talk with them, he disappeared, we had a fight. After the fight he returned 'improved': 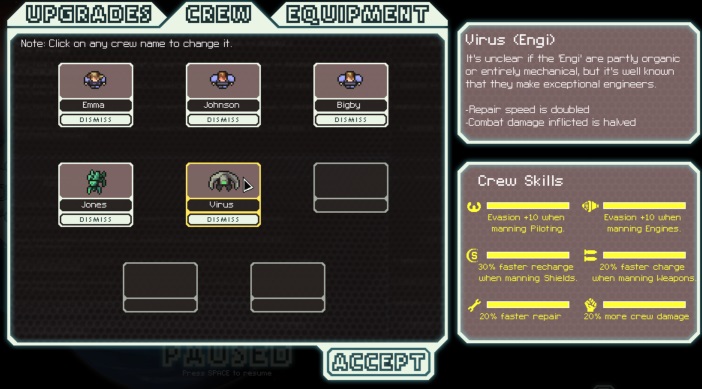 It looks to good to be true, so - is there a catch later on? or is it part of a quest?

Nope - no catch, at this point he's just a regular crew member (albeit a very skilled one.) He will behave as any other Engi crew would, and will stay with you until your victory / demise.

10
What are the effects of playing on Easy?
11
Is the engi surrender event a penalty for honesty?
11
Does the stealth cruiser have innate stealth weapons capability?
10
Is it possible to get the Zoltan Shield/Engi Med bot dispersal etc through random encounters?
3
How do I defeat the Flagship with an Engi ship, focusing on Ion Weapons?
18
What are all the effects of hacking a system?
7
What are all the Beacon Special Effects?
14
Does Engi Medi-bot dispersal heal the boarding party?
18
How many ions a day keep the rebels away?
1
Can one please elaborate the 'Engi Colony Hiding' encounter?