How can I complete the hacking mini-game in Lego Dimensions?

One of the character abilities required to unlock certain areas in Lego Dimensions is Hacking. Using the hacking ability on a hackable item takes you to a small mini-game, the objective of which seems to be to stand on a number of pillars (and take a few second stop unlock them) whilst avoiding the monsters.

I can get to and unlock all of the pillars on the normal, blue path around this level, but I can't work out how to possibly get to the last one that's floating on the transparent blue/red squares. 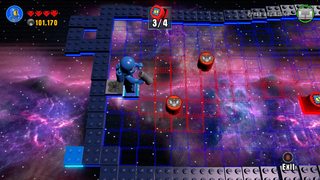 The pillar that I'm trying to get to is the one highlighted in the middle of the far-right edge of the screenshot above. The game won't seem to let me step on the transparent squares, or interact with the red monsters in any way (like jumping on them), none of the gameplay buttons seem to do anything (other than the "Jump" which makes monsters turn around, but that doesn't seem to help here).

Just to show that writing down your problem makes you think about things a bit more, and even more importantly, moving from game to laptop makes you look at the portal pad as you look between screens.

The answer was literally staring me in the face. The portal on the table in front of had changed from its normal setting of all white pads, and now had three colours on it, moving the Benny minifig from the green pad to a blue or red pad made new walkable squares appear near him ingame in the formerly transparent blue or red outlined areas. 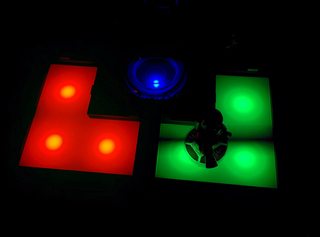 Not the answer you're looking for? Browse other questions tagged lego-dimensions or ask your own question.