Can I appear to be playing a Steam game without actually playing it?

This may sound stupid, but I really want to know if I can appear to be playing a game without necessarily having it installed, a bit similarly to something like Idle Master.

If you add a non-steam game, and go to its properties, you can set the name to be whatever you wish. Using this, you can find some lightweight program you aren't using, like notepad for example, add it to Steam, and then change the name to the game you're playing. I've used this to let my friends know I'm playing a console game before.

One way you can do such a thing would be to use an existing game that has been installed. To appear as if you're playing a different game, you can modify the steam_appid.txt file for that installed game and change the game ID there to the ID of the game you wish to appear to be playing. If a game does not have one of these files by default, creating one yourself will still work. 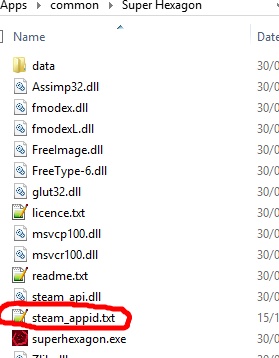 Simply replace the text in the file with the app ID of whatever game you wish to 'play'. To find out what app ID the game of your choice has, look at the URL for the game's store page and copy the number at the end of the URL (store.steampowered.com/app/[appid]/).

However, this will only work if you then run the game through the .exe file instead of opening it through Steam. If you open it through Steam, the app ID file will be reset back to its default.

59
Why is Steam saying my friends are playing Hello Kitty: Island Adventure when I know they aren't?

12
How do I get Steam games on the Windows 7 Game Explorer?
1
Can you idle in more than one game at the same time?
4
Steam support for Rift without re-downloading?
4
How to find RPG games in my steam library?
7
How can I get my Steam Cloud saves without installing the game?
4
Is there anything about the macOS 64-bit Steam Client installed on Mojave macOS that would interfere with playing 32-bit games?
28
Buying someone a Steam game without a Steam account
2
How can I have game-specific Steam in-game browser homepages?
2
The Stanley Parable (the original game) hang up randomly after few minutes of playing